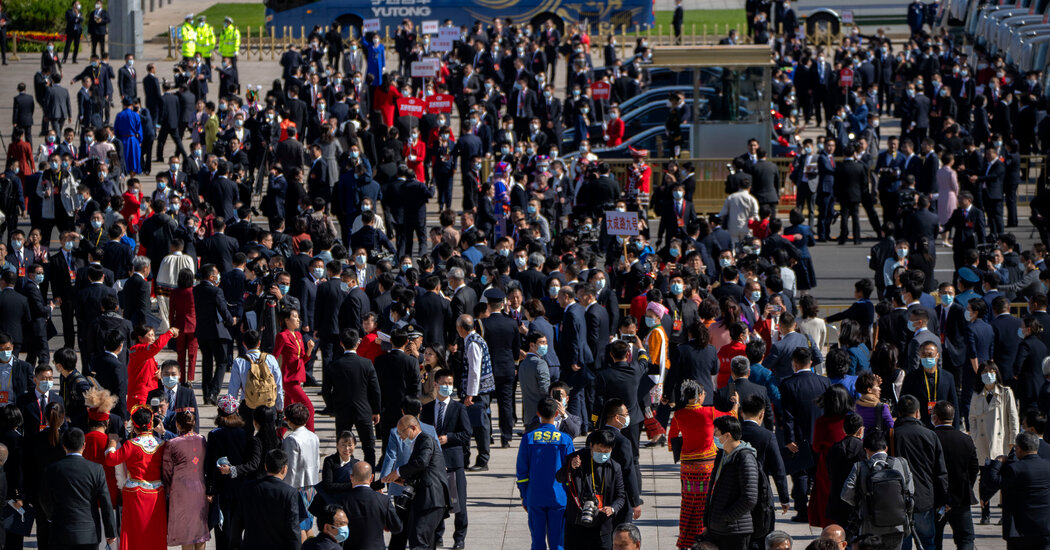 China, the world’s second-largest economy, announced without explanation on Monday that it was delaying indefinitely the release of economic data that had been scheduled for Tuesday morning, including closely watched numbers for economic growth from July through September, which had been expected to show continued lackluster performance.

The delay by China’s National Bureau of Statistics, which analysts said was highly unusual, comes as the country’s ruling elite gather in Beijing for a weeklong, twice-a-decade national congress of the Communist Party. The authorities have taken elaborate measures to prevent any disruptions during the gathering, from halting almost all travel into Beijing to requiring frequent Covid-19 tests across practically the entire country.

The postponement of the report drew speculation that the data might have been worse than officials expected. Western economists had been predicting that China would announce that the economy grew a little more than 3 percent in the third quarter compared with last year. That would be better than the growth of just 0.4 percent in the second quarter, when a two-month pandemic lockdown in Shanghai severely depressed many industries’ output.

But it would still be far below the target that Beijing set in March, aiming for growth of “about 5.5 percent” this year.

Large countries seldom postpone the release of even a single economic statistic for fear of hurting financial confidence, much less the broad array of market-moving data that China’s National Bureau of Statistics has now delayed. In addition to deferring the release of gross domestic product data for the third quarter, the government agency postponed the release of September data for retail sales, industrial production, fixed asset investment and other categories.

“I’ve not come across before a situation where a whole raft of statistical reporting has just been postponed, in nearly half a century of monitoring data releases — not even in times of pestilence and conflict,” said George Magnus, a former chief economist of UBS who is now an associate at the China Center at Oxford University.

Zhao Chenxin, the deputy director of the National Development and Reform Commission, had taken an upbeat tone about the Chinese economy during a news conference on Monday morning at the media center of the party congress.

“Judging from the current situation, the economy rebounded significantly in the third quarter — from a global perspective, China’s economic performance is still outstanding,” he said.

After the close of trading on Chinese stock exchanges on Monday afternoon, the National Bureau of Statistics canceled its quarterly news conference, which had been scheduled for Tuesday morning, and updated its online calendar of data releases to show many categories as “delayed.”

Another agency, the General Administration of Customs, had separately failed on Friday to follow its own previously issued schedule for the release of export and import statistics for September. The release of those numbers has also been delayed indefinitely.

Chinese officials have been trying to rebut growing criticisms from foreign economists and multinational corporations that China now puts politics and ideology ahead of economic performance. Mr. Zhao said on Monday morning that because of the government’s pandemic policies and emphasis on economic development, “China’s economic stabilization and improvement will be further consolidated.”

As China has grown to become the world’s largest manufacturer and a major trading power, and home to some of the world’s biggest banks, it has repeatedly struggled with how its Communist Party-dominated political structure communicates with financial markets.

For example, China’s central bank, the People’s Bank of China, announced with almost no explanation in August 2015 that it was devaluing the country’s currency, the renminbi, by nearly 2 percent. The move was intended as a technical measure connected to bringing the renminbi into the International Monetary Fund’s system of reserve currencies.

But the sudden move contributed considerably to a panic in financial markets in China and abroad that lasted into the next winter, driving down share prices in China and causing investors to move hundreds of billions of dollars out of the country.

In recent years, the National Bureau of Statistics has quietly discontinued hundreds of series of data on narrow subjects, like the output of specific types of coal or raw silk. Foreign economists used to rely on some of the reports to double-check the veracity and plausibility of broader government data, such as overall economic growth statistics.

“Analyzing China has always been a tough gig, but the way you can get things right is by looking at as much information and data as you can and try to fit as many pieces of the puzzle together into a coherent picture,” said Diana Choyleva, chief economist at Enodo Economics, a London consulting firm. “This has become progressively harder over the past few years as China has become a lot less open.”