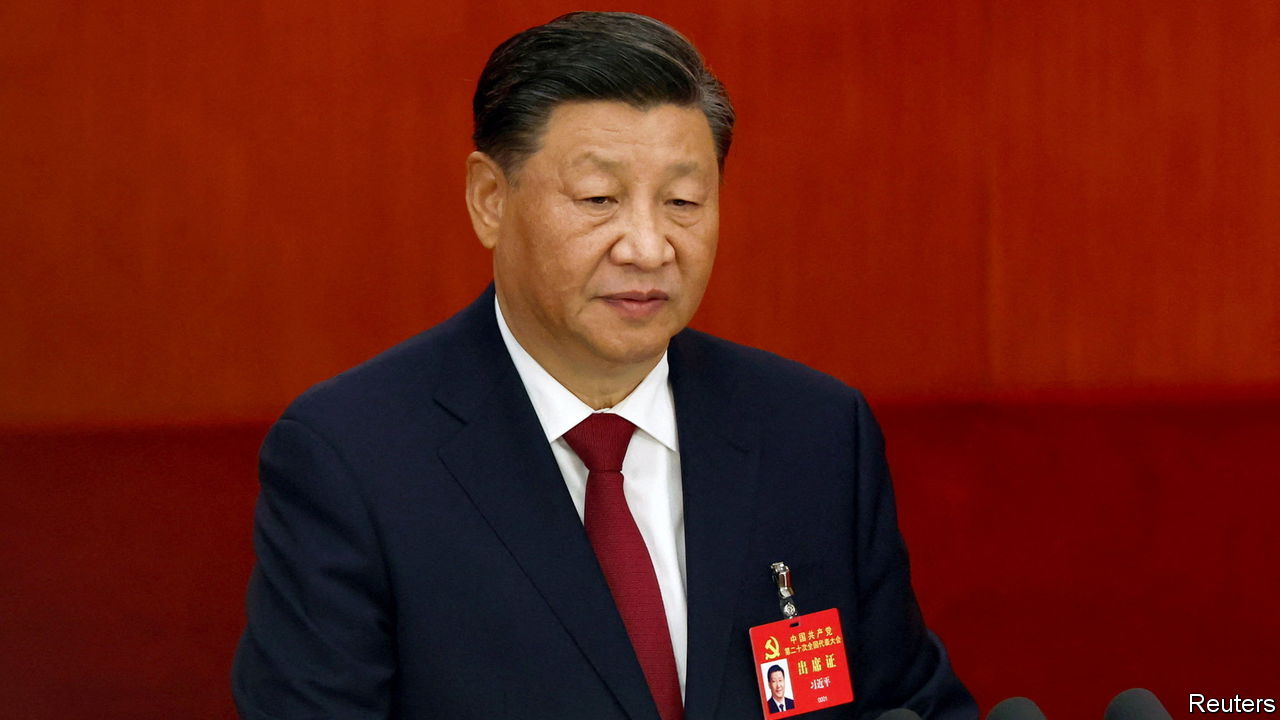 Hard, risk-filled times are coming to China and the world, and Xi Jinping is in his element. For nearly two hours on October 16th, China’s supreme leader instructed Communist Party members to face challenges at home with a fighting spirit, and to seize strategic opportunities in a shifting international balance of power. The last part is code for the perceived decadence and decline of America, a country that hovered over the whole speech as a source of menace, though it went unnamed. Mr Xi’s uncompromising address—a work report, in party jargon—suggested that officials will stick with what he called his “all-out people’s war” against covid-19. It called for resistance to foreign powers bent on containing China; and for members to guide the young to heed the party, study diligently, keep fit, pursue realistic goals and, in due course, make more babies for the motherland.

Mr Xi delivered his remarks with grim relish in a solemn setting, the opening of the 20th National Party Congress in the Great Hall of the People in Beijing. Such gatherings are held twice a decade. National congresses set high-level doctrine and select (or, in truth, rubber-stamp) a new slate of party leaders for a five-year term. This time, the stakes are unusually high. That is true for Mr Xi, who is set to emerge with his mandate extended for a precedent-trampling third term—and perhaps for life—and wielding more personal and ideological authority than any ruler since Chairman Mao Zedong. It is also true for his party, which faces strong headwinds, not least because of policies imposed by Mr Xi.

China’s economy is slowing, in part because of the rolling lockdowns and travel curbs that underpin Mr Xi’s strict “zero covid” approach to pandemic control. Private-sector dynamism and confidence have been dampened in part because of his moves to impose the party’s writ on business sectors deemed a threat to order and national security. For ordinary Chinese aged 40 or younger, who are used to living in a country on the rise, it is a shock to have to worry about a wobbly housing market putting savings in peril, and to see young people, including college graduates, struggle with rising unemployment.

Business and political elites know that China’s global image has suffered during the past few years, at least in liberal Western democracies. Foreign alarm at China is directly linked to its assertiveness, as pugnacious Chinese diplomats reject criticism of their country’s iron-fisted ways, and the Chinese government uses economic coercion to bully or punish countries that displease it. This has stoked distrust that is changing views of China’s reliability as a trade partner and supplier. The West’s rude awakening about Russia involves new clarity about China, too, after Chinese leaders and diplomats declined to condemn Mr Xi’s avowed best friend, Vladimir Putin, for his invasion of Ukraine. With awkward timing, Mr Putin’s murderous incompetence and nuclear brinkmanship in Ukraine leaves Mr Xi going into a party congress as the best friend of a loser.

Amid all this turbulence, Mr Xi’s work report concedes no ground. It flatly defends his zero-covid policies for putting the lives of the Chinese people first, while delivering “tremendously encouraging” epidemiological and economic results. In a section on cultivating world-class scientists and engineers, the work report praises the principle of “the party managing talent”. A section on innovation emphasises party leadership over high-tech industrial policies. As if working its way down a checklist of Western concerns about China’s rights record, the work report hails the crushing of Hong Kong’s democratic opposition for “restoring order”, and—without naming Tibet or Xinjiang—boasts that the party has “effectively contained ethnic separatists, religious extremists and violent terrorists”.

Work reports to a party congress do not discuss current events such as the Ukraine war: they are high-level texts drafted over months. Still, this year’s restates a long-standing Chinese charge that a peaceful world order is undermined by American defence alliances in Europe and Asia, or what the report coyly calls “exclusive groups targeted against particular countries”. In something of a relief for foreign governments, the report’s language on Taiwan includes a mix of blandishments and threats to use force if that democratic island declares independence, but includes no new sense of urgency or explicit deadlines for its conquest.

The party does not feel your pain

This generally defiant tone is not surprising. Mr Xi has another term to secure, and party congresses are at the best of times not moments for leaders to show weakness. These are not the best of times. But the report’s complete absence of reassurance is revealing, nonetheless, about Mr Xi’s mandate to rule. China’s population really is weary of zero-covid controls. Lots of homeowners, unemployed youths and their parents are scared about the future. Chinese entrepreneurs are sincerely anxious about statist economic policies. It is not hard to meet Chinese officials and scholars alarmed by Mr Xi’s picking of fights with the West. Yet there is nothing in the work report aimed at such anxious groups, because they have no way of holding Mr Xi to account.

Mr Xi’s constituency is not the country at large. It is not even the 2,300 delegates at the congress, who are window-dressing in a party ritual as preordained as a coronation. Tellingly, a telegenic handful of delegates were chosen to field pre-screened press questions on the opening day, including an astronaut in uniform, an Olympic athlete and an ethnic-minority official in traditional garb. Most proceeded to heap praise on Mr Xi.

Mr Xi’s mandate to rule comes from a few party bosses and elders, meeting in secret long before the congress. The brutal rules of elite Chinese politics give a leader no incentive to acknowledge the costs of his policies, let alone admit mistakes. In the Great Hall of the People, Mr Xi’s unyielding work report was greeted with prolonged applause. That was the sound of deference to power. ■