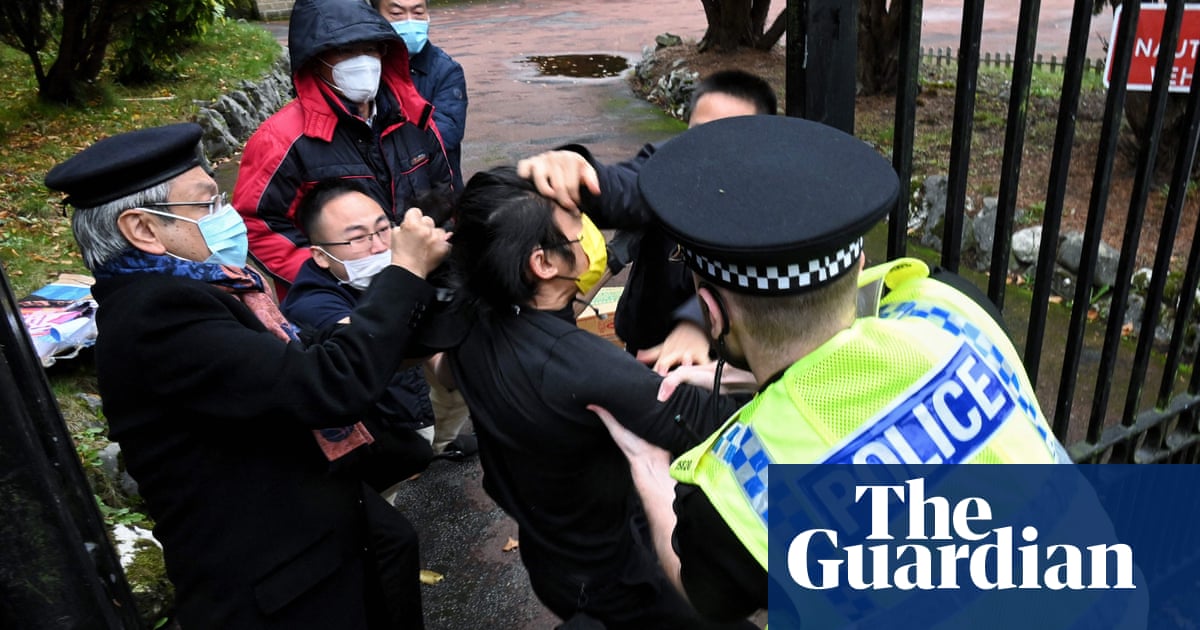 A shocking attack on a pro-democracy protester who was dragged inside the Chinese consulate in Manchester and beaten, allegedly by consular staff, was a manifestation of China’s increasingly aggressive foreign policy, according to analysts.

On Sunday, the day the Chinese Communist party’s 20th congress opened in Beijing, a small group of Hong Kong protesters demonstrated outside the consulate. Images from the attack circulating on social media show a grey-haired man holding one protester by his hair just inside the consulate gates, as other men attack him. The man had previously emerged from the consulate and demanded the removal of satirical posters of the Chinese president, Xi Jinping, and torn down a protest banner.

Analysts say the act is consistent with a series of hawkish rhetoric and gestures made by China’s foreign diplomats in recent years.

Prof Chung Kim-wah, a social scientist formerly with the Hong Kong Polytechnic University, said the move appeared to be a deliberate provoking gesture intended to teach protesters a lesson.

A response from the Chinese consulate to the BBC Chinese service called the protesters “a small bunch of Hong Kong pro-independence elements” whose act of hanging “an insulting portrait of the Chinese president” at the main entrance was “intolerable”.

Chung, explaining Chinese officials’ mentality, said: “Since they were ‘a bunch of HK pro-independence elements’, punishing them would be totally reasonable. It also served as a warning and intimidation to the protesters. It is consistent with [China’s] current style of foreign policy.”

Xi, who is set to secure a third term in power, on Sunday hailed the decision to crack down on Hong Kong’s pro-democracy movement, saying the situation there had turned from “chaos to governance”.

From the president’s recent rhetoric, analysts expect the party’s strident “wolf warrior” diplomacy to persist in the next decade when Xi is expected to stay in power.

In Xi’s speech at the opening of the congress on Sunday, he used 17 times the word douzheng (“struggle”), which harks back to Mao Zedong’s emphasis on “class struggle” and combat against foreign, imperialist influence, and used the word “security” about 50 times.

In the full text of his speech, he urged cadres to “dare to struggle” and extolled “a fighting spirit” to defend national dignity and national interests amid a “turbulent” international situation. He also praised Chinese foreign policy for fending off western “bullying” and protectionism, in an apparent reference to western criticisms over human rights, Taiwan and technology issues.

On the 1 October national day, Xi also reminded cadres that “the Chinese Communist party’s historical mission in the new era” was to “struggle” and to bolster the “fighting spirit” and the “combat capability” of the party in politics and ideology.

The vice-foreign minister, Ma Zhaoxu, told a press conference in late September that “we dare to brandish our swords to fight resolutely” to defend China’s national sovereignty and security, and would not “budge an inch” on core issues and on Taiwan, Hong Kong, Xinjiang, Tibet, maritime and human rights issues.

Earlier this year, China’s ambassador to France sparked outrage by saying the Taiwanese people should be “re-educated” after any successful annexation by China.