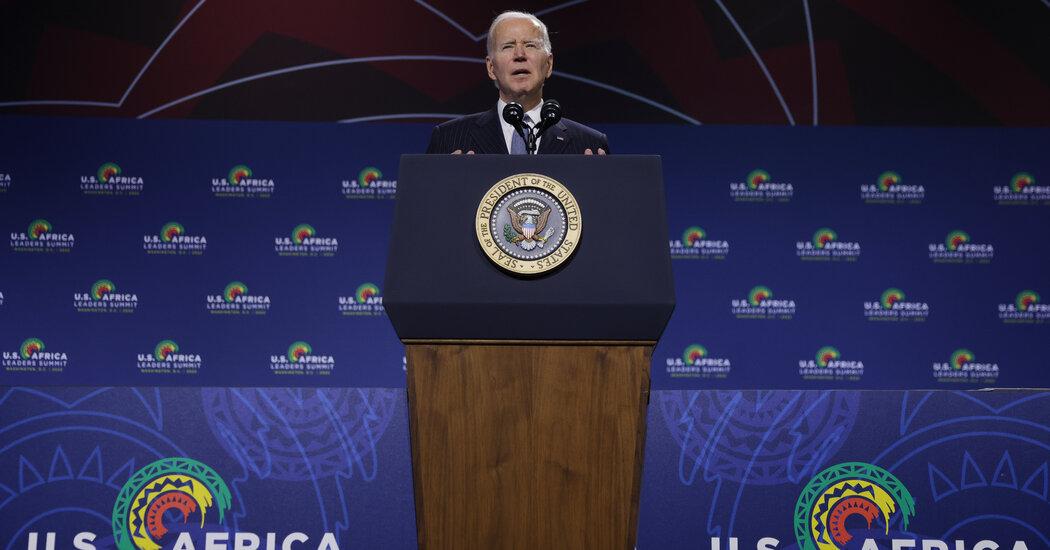 In the course of his interactions with African leaders, the president unveiled a series of initiatives, including an agreement meant to encourage the formation of a continentwide free-trade zone that has stalled over the last few years. He vowed to help African countries do more to transition to clean energy and plug into the digital economy, a contrast to China, which has focused much of its investment in Africa on building roads, bridges, airports and other physical infrastructure.

Mr. Biden said in his keynote address that the goal was not to “create political obligation or foster dependence” but to “spur shared success,” a phrase he said characterized his approach. “Because when Africa succeeds, the United States succeeds,” he said. “Quite frankly, the whole world succeeds as well.”

The Biden administration has sought to deflect the perception that its efforts this week were aimed at competing with China, which has surpassed the United States in trade and economic cooperation with Africa.

But the emphasis put on Africa was an implicit recognition that the United States has little choice but to commit to the continent, which is projected to account for one in four people by 2050 and is rich in the resources needed to combat climate change and transition to clean energy, like vast forests and rare minerals used to power electric vehicles.

Mr. Biden’s challenge was to convince the African leaders that he was serious about wanting to trade with them. Many were openly skeptical. At a side event in Washington hours before Mr. Biden spoke, President Paul Kagame of Rwanda shrugged when asked if anything had come out of the inaugural U.S.-Africa Leaders Summit hosted by Mr. Obama in 2014.

“Well, at least we had a good meeting,” he replied, drawing laughter from the crowd.

Mr. Biden planned to return to the summit at the Washington Convention Center on Thursday for a session on the African Union’s strategic vision for the continent. Vice President Kamala Harris will host a working lunch, and Mr. Biden will close the gathering with a discussion of food security.

The Covid-19 pandemic and Russia’s invasion of Ukraine provided Mr. Biden with an entry point for his pitch to Africa’s leaders, reminding them that the United States delivered 231 million vaccines to 49 African countries.