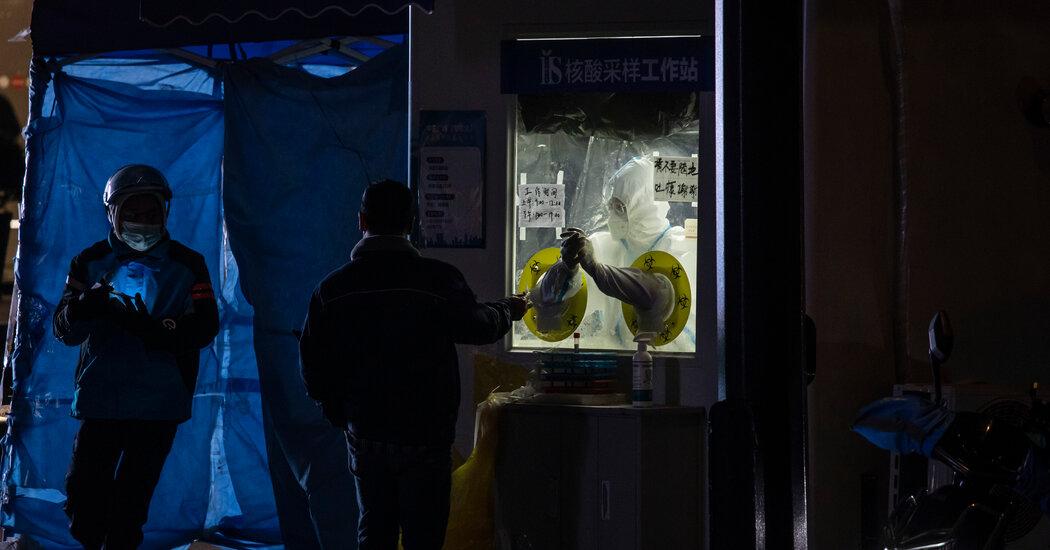 The Chinese government announced on Wednesday a broad easing of its exceptionally stringent Covid restrictions, an implicit concession to public discontent after mass street protests in more than a dozen cities a week ago challenged Beijing’s authority.

The changes are not a complete dismantling of China’s “zero Covid” policy, but still represent a considerable loosening of measures that have dragged down the economy by disrupting daily life for hundreds of millions of people, forcing many small businesses to shutter and driving youth unemployment to nearly 20 percent, a record high.

The move reduces the frequency of mandated testing, which in many parts of the country had become a near-daily chore just to move around or use public services. People who have mild or asymptomatic Covid may be allowed to isolate at home rather than be sent to hospitals as has been the case since the virus emerged. The government appeared to retain the use of lockdowns in buildings with cases, but said such measures should be limited and lifted quickly, and that exits must not be blocked.

Beijing’s shift is particularly notable because Xi Jinping, China’s strongman leader, had staked the party’s legitimacy on the success of “zero Covid,” making it an ideological campaign aimed at demonstrating the superiority of centralized control over democratic rule. Mr. Xi enforced “zero Covid” with a ferocious vigor, declaring a “people’s war” against the coronavirus that mobilized the masses in what would become a no-holds-barred strategy to eliminate infections.

Dozens of officials have been punished or fired after outbreaks. Cities have imposed lockdowns that confined hundreds of millions of people in their homes for weeks or even months at a time, often with crude measures such as locks and barriers. Citizens and health experts who sought to question the extent of controls or problems with lockdowns were punished or silenced. Above all, the approach institutionalized a system of digital surveillance that has developed the power not only to track the movements of practically all citizens and residents, but also to keep them in place.

The controls have become harder to justify as rapidly spreading Omicron variants continued to slip through, and especially as the rest of the world has increasingly adjusted to living with the virus. Public discontent boiled over in late November with protests that were the most widespread challenge to the party in decades — hurting Mr. Xi’s image as a leader and defying his longstanding rhetoric that the policy enjoyed broad support and was necessary to improve people’s lives.

Understand the Protests in China

“By now, Xi Jinping should also understand that this virus can’t be controlled, and if it can’t be controlled, then opening up must happen sooner or later,” said Deng Yuwen, a former editor at a Communist Party newspaper, the Study Times, who now lives in the United States and writes commentaries about Chinese politics. “But most fundamental of all, the economy can’t hold up any longer. If they try tightening up again, the ordinary people would really raise hell.”

The measures, by being so expansive and often seemingly arbitrarily enforced, have chipped away at the drive and ambition that powered China’s success in recent decades. More important, the commercial slowdown “zero Covid” caused undermined a key tenet of the party’s rule, that in exchange for democratic freedoms, the people would enjoy steady economic growth and the chance at a better life.

The rollback also points to the immense financial burden Beijing’s all-out approach has imposed on local governments. The policy has relied heavily on mass P.C.R. testing and quarantines in makeshift hospitals and newly-built facilities to house people deemed close contacts — at a cost that has escalated as outbreaks grew.

“Economically speaking, they can’t sustain this,” Mr. Deng said. “Even if local governments want to lock down like before, they just don’t have the money. Then on top of that there’s been the student and public protests, so it’s like the donkey has finished on the grindstone and can be slaughtered — it’s time to open up.”

The central government’s announcement came after a slew of moves over the last several days by local governments, particularly in major cities such as Shanghai and Beijing, to ease their regulations. Shanghai said that it would no longer require residents to show a negative P.C.R. test to ride the subway or buses or enter outdoor parks. Beijing dropped a similar requirement this week for access to the city’s main airport, as well as supermarkets, shopping centers and other public places.

The shift in Beijing represents a clear signal from the national government to local officials across China that their performance will no longer be measured simply by whether they prevent any Covid cases from occurring within their jurisdictions.

China initially focused on inoculating working-age adults against the virus. It held off on shots for the elderly because its vaccines had mainly been tested on medical workers and not on older citizens. This has contributed to vaccine hesitancy among the elderly ever since.

“The most important is to vaccinate the elderly in a short period of time,” said Jin Dongyan, a virologist at the University of Hong Kong.

China has repeatedly refused to buy mRNA vaccines from the West, while trying to develop its own mRNA vaccines. It has relied instead on its own vaccines, which use an older technology and inactivated virus. Studies outside of China have found that the Chinese vaccines are less effective than mRNA vaccines, but they still reduce somewhat the likelihood of serious illness or death in case of infection.

In the days leading up to Wednesday’s announcement, Chinese state media had made a concerted effort to justify Beijing’s policy shift. After years of amplifying Covid fears to justify stringent lockdowns, health officials and state media mobilized in recent days to assure the Chinese public that the virus was no longer as lethal.

On Monday, China’s state broadcaster, CCTV, released an interview with a respiratory health expert who explained that current Omicron variants posed a lower risk of severe illness than the common flu. (Other studies have also found that Omicron infections, while very highly transmissible, are often less severe than previous variants of the virus, although still potentially dangerous, especially to the elderly and those with compromised immune systems.)

Another health expert, on Guangzhou’s official disease prevention blog, took aim at the widely held notion — made popular among Chinese because of the government’s earlier messaging — that vaccines were riskier for older people who had pre-existing conditions. The expert called it a “misconception.”

China’s closely censored social media feeds mirrored the messaging. Hashtags such as “I’m not panicked at all after testing positive” and “pharmacists explain how to deal with Covid’s mild symptoms” were trending on the popular microblog, Weibo.

The timing of the media blitz — on the back of mass protests that sometimes overtly challenged Mr. Xi’s authority — showed how the party can shift gears by using its propaganda to obfuscate what were in fact policy mistakes, said Willy Lam, a longtime analyst of Chinese politics in Hong Kong who is a senior fellow at the Jamestown Foundation.

Mr. Xi “may still insist that he was right with ‘zero Covid’ but by force of circumstances he has no choice,” said Mr. Lam, referring to the recent mass protests and the reeling economy.

“They’re now trying to cover up the mistakes they had made by finally telling the truth to the public that the Omicron variant is not life threatening,” he added.