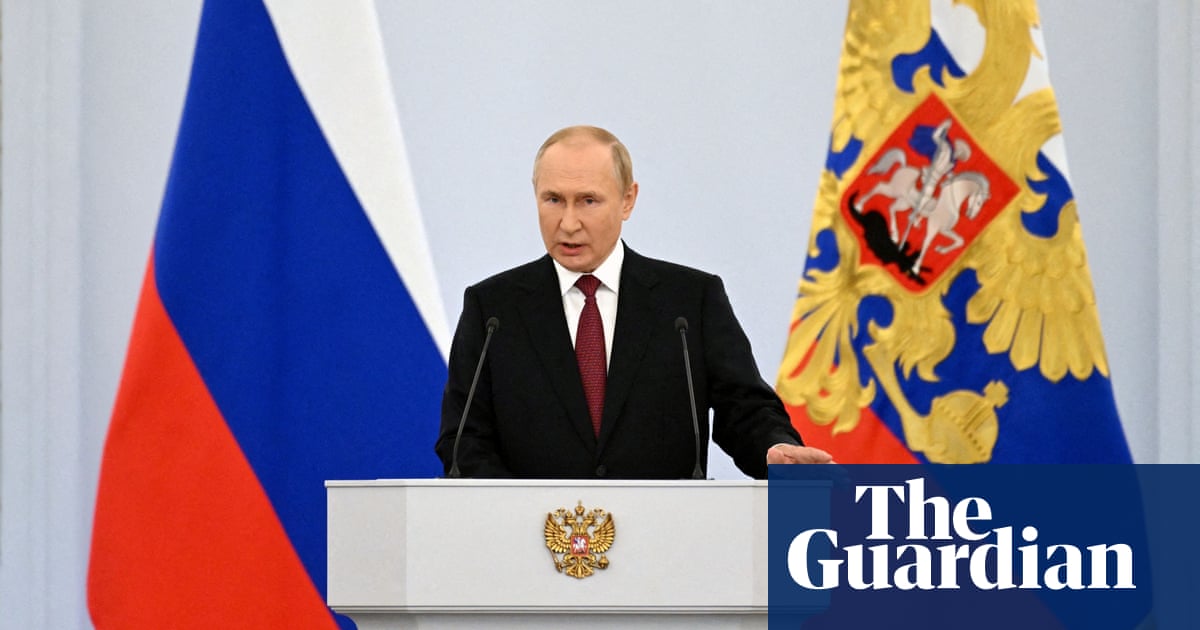 Within a decade, the US will need to deter two major nuclear weapons powers for the first time, the Biden administrationhas warned, pointing to the Russian arsenal that is increasingly being brandished by Moscow and an expanding Chinese stockpile.

The president’s new national security strategy (NSS) depicts China as the most capable long-term competitor, but Russia as the more immediate, disruptive threat, pointing to its nuclear posturing over Ukraine. It warns that threat could grow as Russian forces continue to suffer defeats on the battlefield.

“Russia’s conventional military will have been weakened, which will likely increase Moscow’s reliance on nuclear weapons in its military planning,” the strategy blueprint says. Its publication was scheduled in the spring but was postponed because of Russia’s invasion of Ukraine.

Vladimir Putin has threatened to use “all means” to defend Russian territory, in which he included Crimea, annexed in 2014, and four Ukrainian regions he now claims. The NSS pledges US support for Ukrainian resistance would not be affected by such threats.

“The United States will not allow Russia, or any power, to achieve its objectives through using, or threatening to use, nuclear weapons,” the document says.

In a foreword, Biden makes a distinction between the types of threats posed by Moscow and Beijing. “Russia poses an immediate threat to the free and open international system, recklessly flouting the basic laws of the international order today, as its brutal war of aggression against Ukraine has shown,” the president writes.

He describes China, on the other hand as “the only country with both the intent to reshape the international order and, increasingly, the economic, diplomatic, military and technological power to advance that objective”.

“The People’s Republic of China harbors the intention and, increasingly, the capacity to reshape the international order in favor of one that tilts the global playing field to its benefit, even as the United States remains committed to managing the competition between our countries responsibly,” it says.

China has an estimated 350 nuclear warheads, according to an assessment by the Federation of American Scientists, compared with 5,977 in Russia’s stockpile, against the US inventory of 5,428. However, the Pentagon believes the Chinese force will grow to more than 1,000 warheads by 2030, making it a third major nuclear power.

Under the last remaining major arms control agreement in place, the New Start treaty, the US and Russia observe a ceiling of 1,550 deployed strategic warheads, referring to those warheads mounted on land or sea-launched missiles, or ready for loading on to long-range bombers.

Daryl Kimball, the head of the Arms Control Association, expressed concern over whether the new language in the strategy document could herald a rethink about the size of the US arsenal.

“If we have to worry about two near-peer nuclear rivals by the year 2030, what does that mean for the number of targets in Russia and China that the president believes we need to hold at risk to deter those nuclear threats? And how does that affect that total number of strategic nuclear weapons the United States and the president believes he needs to deploy?” Kimball asked.

“They’re basically looking at issues and questions that could lead to a larger number calculation,” he said, adding: “It’s not hard science. It could be more; it could be less. I would argue that even if China has twice the number of nuclear weapons, we still can and should reduce the total number of strategic nuclear weapons because what we have is excessive of any reasonable calculation of what it takes to deter a nuclear attack.”