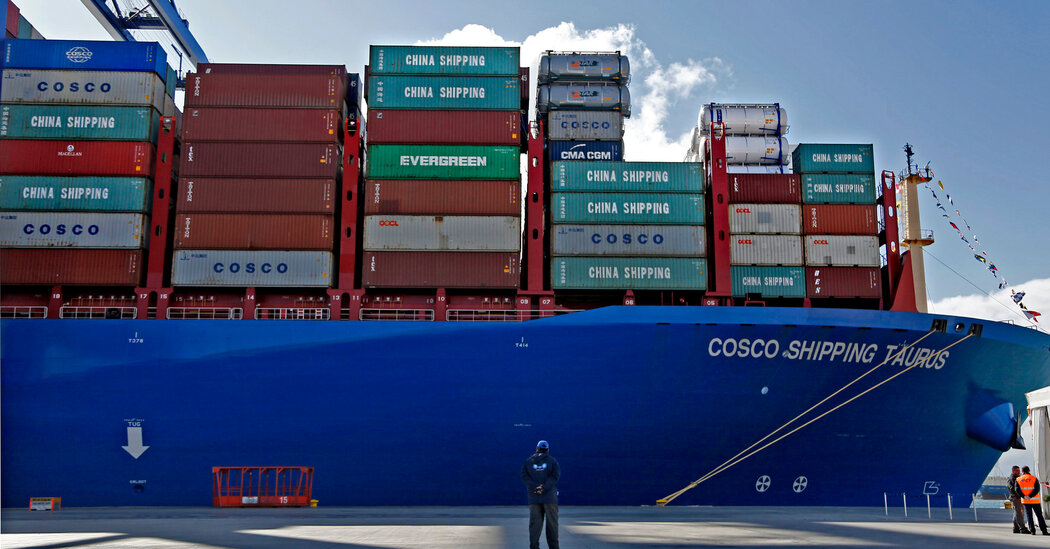 Soon after President Xi Jinping of China took power, he instructed top Communist Party leaders in a 2013 speech to turn the country into a “maritime superpower.”

China already has the world’s largest navy, though its ability to contend with U.S. naval forces remains in doubt. But leaders in Beijing have realized that maritime strength is not measured solely in firepower.

Success in commercial shipping would have “great and far-reaching significance” for Chinese national strength and security, Mr. Xi told the Politburo then, reminding the party that throughout history the most powerful nations were those that controlled the seas. Nearly a decade later, Mr. Xi’s vision is a reality.

China has become a global maritime powerhouse, with thousands of commercial vessels plying sea lanes, a vast shipbuilding industry capable of churning out more vessels and such dominance of global supply chains that it could bring the United States to its knees in a conflict.

The U.S. economy is heavily dependent on products and resources from China and East Asia, transported through shipping networks that are increasingly under the control of Chinese interests. China, including Hong Kong, owns more commercial vessels than any other country — almost twice as many as second-place Greece. It builds about half of the world’s large commercial ships, up from just 3 percent in 1993, and produces 96 percent of the world’s dry shipping containers.

Chinese entities have gained ownership shares in marine terminals and infrastructure around the world — including some U.S. terminals — through the Belt and Road Initiative, Mr. Xi’s global plan to extend his country’s economic reach. And a congressional advisory body has warned that Beijing could use shipping data to track cargo movements for commercial or strategic advantage. This includes movements of U.S. military equipment, much of which is transported via commercial shipping.

A vast majority of U.S. trade with China is done by sea, and the United States relies on Chinese imports of computers, smartphones, technical components and essential machinery. But China also dominates global production of specialized commodities like refined lithium and rare-earth products, crucial components in a range of high-tech products, including those with military applications.

The risk of overreliance on potential adversaries has been made clear by Russia’s throttling of natural gas to Western Europe, which has sent prices soaring and reduced supplies as winter approaches. America got a taste of its own vulnerability when skyrocketing demand for Chinese-made face masks and personal protective equipment early in the pandemic caused China to stall shipments, and subsequent supply-chain gridlock caused chaos for U.S. importers and exporters.

If China and the United States went to war over Taiwan, Beijing could direct Chinese shipping companies to interfere with U.S.-bound products or resources. Beijing has shown its willingness to play hardball on other occasions, including blocking a range of imports from Australia after it called for an investigation into the source of the coronavirus. Trade disruptions would hurt China, too. But it’s easier for authoritarian regimes to suppress dissent over asking their citizens to endure economic pain, and Beijing is moving to insulate itself from such shocks through economic decoupling from the United States.

America was the world’s leading shipbuilder after World War II. But in 1981 the government canceled an important subsidy program, leaving American shipyards to compete directly with heavily subsidized foreign rivals. The impact has been severe: U.S. shipbuilders delivered an average of about 16 ships per year over the decade ending in 2018, mostly for Navy or Coast Guard use; Chinese shipyards had orders for 1,529 large commercial ships at the end of last year. Fewer than 200 such vessels flew the U.S. flag at the end of 2021 versus more than 5,000 Chinese ships. Hobbled by unfavorable tax policies and other competitive disadvantages, the last of the large U.S. shipping companies sold out to foreign buyers in the 1990s.

The CHIPS and Science Act — passed by Congress in July to diversify America’s global sources of semiconductors and support U.S. manufacturers — showed what can be done when there is bipartisan recognition of the risks the country faces.

America needs a “U.S. Ships Act” that sets a clear national maritime strategy, channels investment into developing the country’s shipbuilding industrial base and includes financial and other supports to help American shipbuilders and shipping companies reclaim lost ground in international markets. The United States also needs to replace its fleet of mostly obsolete ships that are kept on standby to carry military supplies in an overseas conflict, as was done successfully during the Persian Gulf war and which may be necessary in a conflict over Taiwan.

All of this must be accompanied by a push to recruit, train and retain the tens of thousands of skilled American workers who will be needed for this industry revival. The United States has a strong basic infrastructure for maritime education in place, with the federal merchant marine academy, six state academies and various other programs. But shipbuilding is hard work, and working on commercial vessels can mean weeks away from home. Aggressive recruiting programs are needed starting at the high school level, with the sincere message that building and operating ships can be a safe, rewarding career choice that helps make America stronger.

The broader regulatory outlook needs to change too, starting with the current system for international shipping that allows ships registered in “flag of convenience” countries like Liberia to carry American cargo, competing directly with U.S.-flagged vessels. Those countries often have minimal safety, labor and environmental standards, allowing ships to operate with lower costs, putting more heavily regulated U.S. ships at a disadvantage.

Countering China’s maritime dominance will take time, money and commitment. But if we fail to diversify American import sources and re-establish some control over the global maritime supply chain, the United States may find itself in a confrontation with China, and with one arm tied behind its back.

Michael Roberts (@mrob359) is an adjunct fellow at the Hudson Institute and a non-resident senior fellow at the Navy League’s Center for Maritime Strategy. He is former president of the American Maritime Partnership, was a senior executive with Crowley Maritime Corp and continues to provide consulting services to the maritime industry.