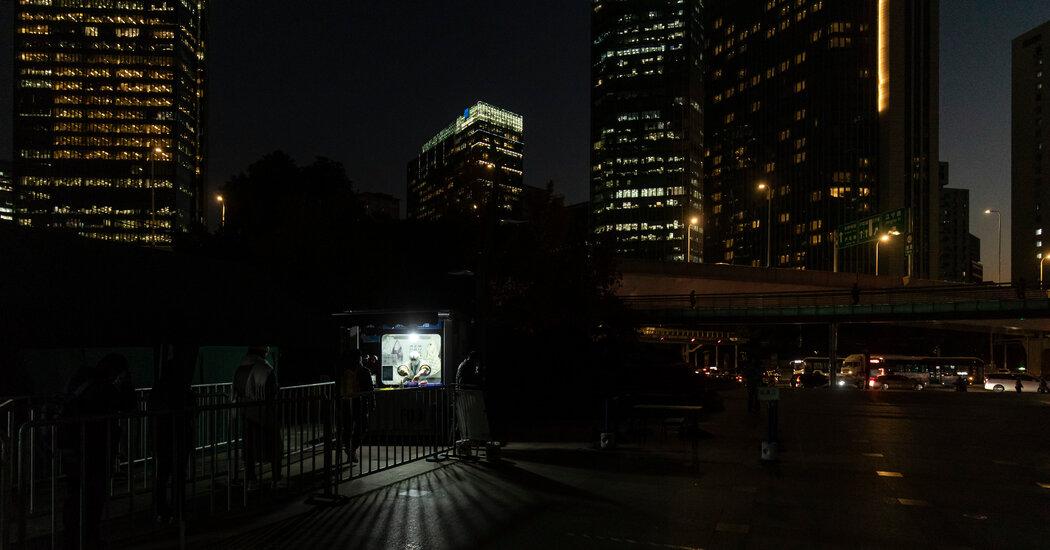 The southwestern city of Chongqing was the latest frontline of Xi Jinping’s “zero Covid” war, until it came to epitomize China’s potentially devastating about-face that has cracked the Communist Party’s edifice of absolute control.

The city last month was enduring one of the biggest outbreaks cropping up across China, when the national leader, Mr. Xi, ordered officials to continue mass testing, lockdowns and quarantines. Chen Min’er, the Chongqing party secretary, devoutly complied, closing off neighborhoods and ordering the instant construction of a quarantine hospital designed to hold up to 21,000 beds.

“Be resolute in fighting and winning this war of annihilation against the pandemic,” Mr. Chen, a protégé of Mr. Xi, told officials on Nov. 27. “Not a day of delay.”

But 10 days later, China suddenly abandoned the “zero Covid” strategy on which Mr. Xi had staked his reputation. Now the country faces a surge of infections, and Mr. Xi has left officials scrambling to manage the disarray and uncertainty.

China’s party-run media has cast the shift as a stressful but well-considered exit, opening the way back to good economic times. Warnings about the dangers of the coronavirus have swiftly disappeared, replaced by official claims that the Omicron variant is generally mild. By holding off from easing until now, the government has saved many lives, the People’s Daily said on Thursday in a long article defending Mr. Xi’s pandemic strategy as “totally correct.”

In reality, an examination of how the shift unfolded in Chongqing and elsewhere reveals a government overtaken by a cascade of Covid outbreaks, confusion over directives, economic woes and then rare political protests.

Mr. Xi had contrasted his prior pandemic success with the “chaos of the West,” brandishing it as proof of his grand narrative of a rising China: orderly, secure, farsighted. But he had no plan for measured retreat from “zero Covid,” leaving a bewildered populace to improvise after three years of being micromanaged.

The government is racing to approve vaccines and to obtain Western medicines after shunning them. Officials, long focused on eliminating cases, are struggling to marshal resources to treat an explosion of infections. Even the Chinese Communist Party, a virtuoso at controlling the narrative, is finding it difficult to sell the policy lurch to anxious residents.

This weekend, the streets of Chinese cities remained quiet, except for throngs of people at hospitals for Covid tests or treatment, an eerie reprise of Wuhan three years ago, when that city was the first gripped by the virus.

“It’s overall been quite chaotic, and of course part of that is the number coming down positive — about one-third of people, to judge from my friends,” said Tan Gangqiang, a psychological counselor in Chongqing who has helped residents with the stresses of lockdowns, and now, of sudden opening.

“There are many people who have been living under the official propaganda for a long time, so after being released they feel at a loss about what to do,” he said. “There are even some who hope that the government will restore controls.”

Mr. Xi’s own formula for beating back Covid may have inadvertently set China up for this jolting and potentially devastating turn.

Understand the Situation in China

The Communist Party cast aside restrictive “zero Covid” policy, which  set off mass protests that were a rare challenge to the Communist leadership.

He turned China’s intense top-to-bottom mobilization against the pandemic into a showcase of the party’s organizational strength. For two years, his Covid war enjoyed widespread public acceptance, but eventually the effort exhausted staff, strained local finances, and appeared to drown out attempts to discuss, let alone devise, a measured transition.

Mr. Xi has no likely successor and could stay in power for at least another decade. But the scars from the abrupt change may feed distrust in his domineering style.

“The whipsaw speed of this shift is partially the extent to which this is the decision of one man. But also it’s officials trying to please that one man, and trying to run where you think he’s headed — sprint, in fact,” said Jeremy L. Wallace, an associate professor at Cornell University, whose book, Seeking Truth and Hiding Facts, examines China’s political transformation under Mr. Xi.

A system under stress

Many sensed change was in the air after protests across Chinese cities in late November against pandemic restrictions. Few, though, expected a reversal from the “zero Covid” strategy enshrined as essential to protecting China’s 1.4 billion people from a storm of infections.

On Nov. 28, during the protests, China’s news agency, Xinhua, had called the strategy a “magic weapon for victory.”

Then, as she gathered on Nov. 30 with health experts and officials who had been vocal defenders of zero Covid, the tone changed.

“Our fight against the pandemic is at a new stage and comes with new tasks,” said Ms. Sun at the meeting of the National Health Commission. Strikingly, she didn’t use the term “zero Covid,” one of the first hints that the country was relinquishing its long-held approach.

Even before the protests, the strategy had been under severe stress. By late November, outbreaks were ripping through more than 200 cities. On Nov. 7, national authorities confirmed 5,496 Covid cases; by Nov. 27 it was nearly 40,000, a record high for daily cases in the country.

The pooled P.C.R. testing that was a pillar of “zero Covid” — checking samples from 20 or more people in the same test tube as a quick, cheap way to find infections — stopped working in some cities. Too many positive results were clogging the queue for follow-up tests to pinpoint the carriers. In Beijing, results were taking days to come back.

“It was in too many cities; it was spreading too far,” said Rodney Jones, the principal at Wigram Capital Advisors, a firm that has closely monitored China’s cases. “It was a question of when would they recognize that reality.”

The economy was also battered. Shoppers stayed home, either locked down or trying to avoid quarantine for accidentally passing through a designated viral hot spot. Retail sales were down almost 6 percent in November compared with a year earlier. Housing prices continued a long slide.

Mr. Xi has argued that Covid controls, while burdensome, had protected China’s economy and health, to the envy of the world. But the distress was starting to translate into one of the party’s greatest fears: worker unrest.

In Haizhu, a textile manufacturing district in southern China, laborers poured onto the streets over food shortages and hardships under lockdown. Migrant workers, who depend on daily work for their livelihoods, went weeks without jobs.

“I couldn’t make a living this year,” said Zhou Kaice, a street porter in Chongqing. “Some bosses I worked for started up for a few days but were then shut by lockdowns.”

Despite the strains, officials still insisted China must win its pandemic war. Provincial leaders throughout November declared their commitment to “zero Covid,” often citing Mr. Xi as their lodestone.

“If pandemic controls were loosened, that would inevitably create mass infections,” said a Xinhua editorial on Nov. 19. “Economic and social development and the public’s physical health and safety would be seriously hurt.”

Even if city leaders understood the challenges, Shanghai’s experience stood as a warning against experimentation in Covid policy. Officials there initially tried to avoid a citywide shutdown that would drag down China’s economy, preferring more fine-grained closures. One early lockdown area applied to a single milk tea shop.

But as cases of the fast-spreading Omicron variant multiplied, central government officials reversed course and demanded a citywide lockdown, which ended up lasting two months.

“Many officials would have looked at Shanghai and decided it’s still ‘zero Covid’ no matter what,” said Patricia Thorton, a professor of Chinese politics at the University of Oxford. “War is a binary — you’re either at war or you’re not at war.”

Ms. Sun remained insistent when she visited Chongqing in late November to inspect its pandemic measures, including the hospital under construction. The city’s efforts to identify and isolate infected people were showing results, she said.

“The rapid rise of the outbreak has been effectively contained,” Ms. Sun said, according to a report released Nov. 27, the last day of her visit.

By then, China’s most widespread protests since 1989 had begun. Students, workers and homeowners in Beijing, Shanghai and elsewhere vented against Covid controls, angered by a fire in western China that many believed, despite official denials, had killed residents trapped in their apartments by lockdowns.

“I tell you that in this world there’s only one sickness, and that’s poverty and having no freedom, and we’ve got plenty of that,” said a Chongqing man whose tirade went viral in China.

“Give me liberty or give me death,” he shouted, using the Chinese version of the American revolutionary battle cry.

Mr. Xi told the visiting European Council president, Charles Michel, on Dec. 1 that the protests were driven mainly by frustrated youth who had borne the brunt of lockdowns, according to two officials with knowledge of the talks. Nefarious forces, Mr. Xi added, had tried to piggyback off them to destabilize the country.

While economic and epidemiological realities were forcing leaders to reassess their pandemic controls, the protests appeared to heighten fear that continued restrictions would ignite more demonstrations, without stifling the virus.

“The scale of the protests really seemed to send a powerful message that ‘enough is enough and it’s time to change’,” said Dali Yang, a professor of political science at the University of Chicago who has studied China’s handling of the pandemic.

In the following days, officials issued many new rules: encouraging vaccinations, setting rules for protecting old age homes and other vulnerable sites, preparing villages for infections. Their message about Covid, especially the fast-moving variant, flipped from alarm to tut-tutting at any fears.

“The virulence of the novel coronavirus’ Omicron strain has clearly fallen, and most people infected only show light or no symptoms,” Wang Guiqiang, a medical expert, told a government news conference a day after the rule changes.

For now, most people are staying home, either because they have Covid or fear getting it. But if deaths rise sharply, public anger could revive. Coming infections could hinder a quick economic rebound.

In Chongqing, at least some medical teams have left the just-built quarantine hospital, its future use unclear. A doctor in a city hospital said on social media that “primary care has exploded” with Covid patients, and more than half the doctors and nurses in the respiratory disease section were infected. Mr. Chen, the city’s party secretary, transferred to another city on Dec. 8, part of a wider reshuffle among local leaders.

“Many people have told me that I’m giving up just before dawn breaks,” said Sisi Shi, a business owner in Chongqing who decided this month to close a restaurant she owns in another Chinese city, Dali. “But in my judgment, even with opening up, there won’t be an instant revival, because there’ll be wave after wave of shocks.”

Additional reporting and research by Li You, Matina Stevis-Gridneff and Olivia Wang.