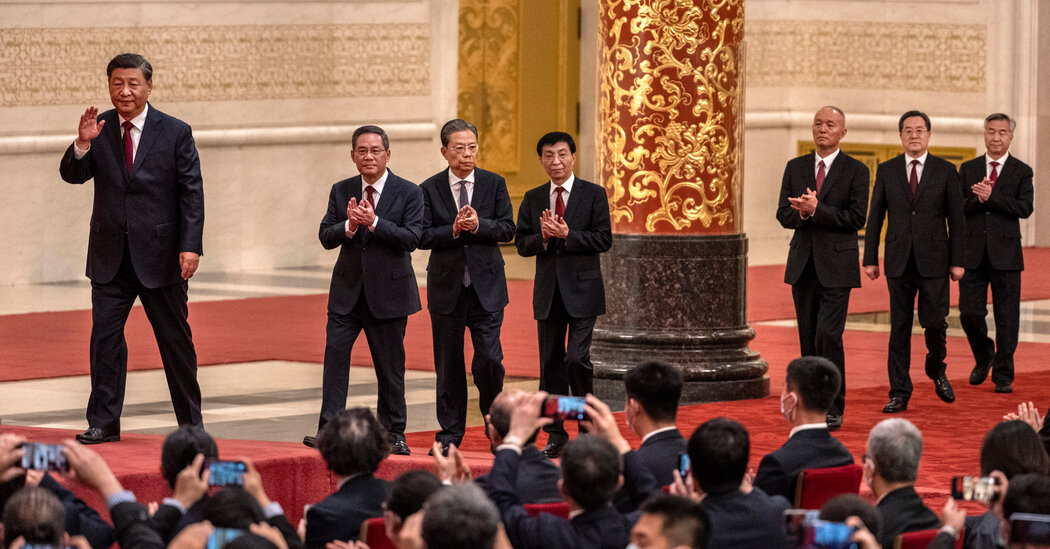 When China’s leader, Xi Jinping, led six dark-suited men onto a bright red stage on Sunday, the scale of his victory became clear as one by one he introduced the country’s new ruling inner circle. Each was an acolyte of Mr. Xi, making his grip over China’s future tighter than ever.

Mr. Xi’s groundbreaking third term as leader, following a weeklong Communist Party congress, was entirely expected. But even seasoned observers who thought that they had taken the full measure of Mr. Xi have been astonished by how thoroughly he shook up the party’s top tiers.

“He was dominant already and is even more dominant now,” said Dali Yang, a professor at the University of Chicago who researches Chinese politics. “He owns it.”

Mr. Xi has stacked the Politburo Standing Committee, the party’s top body, with his loyalists. He has also appointed to the broader leadership a number of domestic security officials, military commanders, ideologues, engineers and technocrats, underscoring his ambition of accelerating China’s rise as a military and technological superpower — while keeping it under unyielding Communist Party control.

For the world, this may portend a China newly energized to pursue Mr. Xi’s agenda. Beijing is likely to remain defiant in the face of international criticism of its hard-line behavior. It is seeking greater self-sufficiency in strategic technologies. It wants to become the pre-eminent military force in the region and to strongly assert its claim over Taiwan. At the congress, Mr. Xi also said that China would promote its own initiatives to solve global development and security problems.

To the party’s supporters and many people in China, Mr. Xi’s centralized control can be a strength. The party has pushed images showing how the pandemic devastated other countries. Mr. Xi has contrasted the vast mobilizing capacity of the Chinese state with what he calls the “chaos of the West.”

“A third term for Xi Jinping very much represents continuity in all of China’s current policies, unlike the United States’ flip-flopping policies,” Wang Wen, the executive dean of the Chongyang Institute for Financial Studies in Beijing, said in written responses to questions. “If Xi didn’t get a third term, wouldn’t the world be even more worried?”

Mr. Xi made clear that he was deeply involved in choosing the new cohort of officials. A top criterion for selection was loyalty to Mr. Xi, said an official account of the selection process that was published over the weekend. Rising officials, it said, must stay in lock step with him “in thinking, politics and action.”

But investing so much power in Mr. Xi is a profound gamble. History is replete with examples of autocrats blinded by hubris and overreach after they surrounded themselves with subordinates afraid to report bad news.

Mr. Xi’s decade in power has already produced examples of overstepping or disastrous foot-dragging, notably in early 2020 when local authorities initially tried to conceal evidence that Covid, then little understood, was infectious. Some scholars argue that such risks will grow now that he has cleared the Politburo of potential mavericks.

“That kind of pressure on people is really going to result in poor implementation of policy, at a minimum,” said Susan Shirk, a former deputy assistant secretary of state during the Clinton administration and author of a new book, “Overreach: How China Derailed Its Peaceful Rise.”

“People won’t dare tell him the actual downsides and costs of his policies and the problems they’re creating,” she said. “Everyone is going to be competing among themselves to show how loyal they are, and they’ll end up overdoing it.”

Even China’s censorship apparatus seemed to betray some sensitivity about the public’s response to Mr. Xi’s power. State accounts on social media turned off their comment sections or showed only upbeat reactions to the news of his new term. A few dissenting views briefly evaded the censors, some using veiled language to lament Mr. Xi’s omnipresence, others asking why Hu Chunhua, once seen as a potential successor to Premier Li Keqiang, had been shunted off the leadership team.

“From his qualifications and performance, he should have been promoted!” one commenter wrote. “If ability isn’t what counts, how can we revitalize?”

Having dispensed with potential counterweights in the party’s top echelon, however, Mr. Xi may find that his biggest hazard becomes his own power, and the fact that responsibility for problems will rest even more clearly with him.

“Xi now truly owns the system, but any mistakes will also be his — unmistakably,” said Professor Yang from the University of Chicago. “Until now, if there were some problems in the economy, he could blame it on others.”

Mr. Xi began his march toward the party congress more than a year ago, exuding confidence that China had stifled Covid, allowing the country’s economic growth to surge ahead of Western competitors’. But even as the Communist Party lauded Mr. Xi, making the case for another term in power, the economy suffered a series of setbacks that at least partly reflected his miscalculations.

A two-month Covid-19 lockdown earlier this year paralyzed businesses in Shanghai and disrupted global supply chains. Economic growth in China from April through June was actually slower than in the United States.

Mr. Xi’s push for ever greater Communist Party control over life in China has played a role in the economic troubles. The housing market is in a slump after Mr. Xi sought to curb property speculation, which he has concluded is undermining long-term healthy growth, prompting dozens of real estate developers to default on their debts.

His exceptionally stringent approach of imposing mass lockdowns and quarantines to eradicate Covid-19 outbreaks has throttled consumer spending on everything from cheap eateries to high-end jewelry.

Entrepreneurs have fled the country, fearing regulatory crackdowns and the possibility of higher taxes as part of Mr. Xi’s egalitarian pledges to deliver “common prosperity.” He has imposed extensive restrictions on the tech and online education sectors, contributing to widespread unemployment among Chinese under the age of 25.

Mr. Xi’s team already has a history of overreach on economic policy. In 2017, energy officials forced schools and apartment buildings in northeast China to rip out coal-fired boilers as part of a national campaign to reduce air pollution. But the natural gas heating systems that were to replace them were not yet ready, forcing children to endure classes in freezing temperatures.

Given Mr. Xi’s emphasis on national security and social stability, few experts expect China to return to the freewheeling business climate that accompanied rapid economic growth before he took office. On the contrary, Mr. Xi talked far more about Marxism than markets in his opening speech at the party congress.

Faced with the threat of crippling economic sanctions by the United States and its allies, Mr. Xi has carefully cultivated a new crop of technocrats — scientists and engineers in fields like defense and space exploration — to carry out his broader goals, such as efforts to manufacture semiconductors and commercial aircraft.

Top-level promotions included those of two former leaders of China’s space program, an ex-executive of one of China’s largest defense contractors and the former head of China’s nuclear safety agency. Their rise in a time of intensified strategic competition is no accident, said Joel Andreas, a sociology professor at Johns Hopkins University and author of “Rise of the Red Engineers.”

“They’ve got to build up their own key industries including chips and aerospace,” he said, “especially because they’re no longer on friendly terms with the United States.”

Among Mr. Xi’s appointees is Li Qiang, the party secretary of Shanghai, who may be China’s next premier. Mr. Li has also worked at the top level in two provinces that are pillars of the national economy, Zhejiang and Jiangsu. Mr. Li’s image was tainted by the harsh lockdown in Shanghai earlier this year, but he has a reputation for competence, said Professor Yang from the University of Chicago.

Still, even the most qualified or confident officials may eventually quake at the idea of challenging Mr. Xi’s policies. The appointment of a Standing Committee so thoroughly populated with loyalists sends a strong signal that conformity is a road to success.

One of the new entrants into the top body was Cai Qi, a longtime associate of Mr. Xi who was the party secretary of Beijing. In the capital, Mr. Cai is known for starting a divisive drive in 2017 to demolish cheap housing on the edges of the city.

The ostensible reason for doing so was that the buildings were unlicensed and unsafe, but the campaign also served Mr. Xi’s demand to hold down the population of Beijing. Soon enough, the abrupt departure of tens of thousands of migrant workers created serious problems for businesses that employed them as couriers, cleaners and builders.

The bulldozing epitomized the risks that have now grown for China: men who answer to the top at the expense of the citizens below. (The 24-member Politburo no longer has women either for the first time in 25 years.)

“Xi is surrounded by yes-men,” said Jean-Pierre Cabestan, a professor emeritus at Hong Kong Baptist University, “and there are not even any yes-women.”