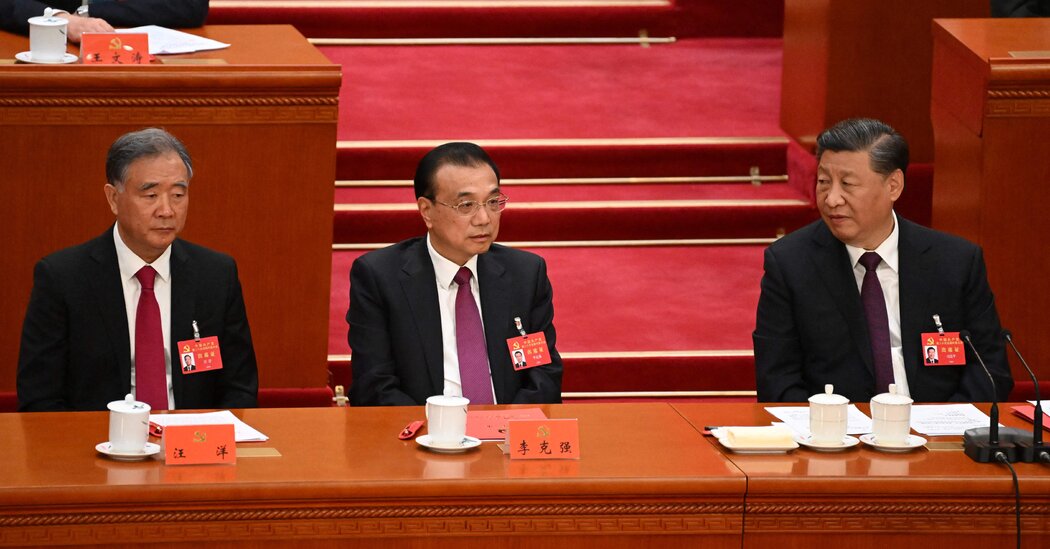 Poised to take a groundbreaking third term in power, China’s leader, Xi Jinping, has advanced a contingent of Communist Party loyalists ready to defend him, expand state influence over the economy and bolster national security.

Mr. Xi opened the new phase of his authoritarian rule with a clutch of victories at the end of a party congress on Saturday. He hurried into retirement two top officials from a more moderate political mold. He positioned allies to dominate the new leadership. He kept officials who have promoted his muscular approach in diplomacy and the military. And Mr. Xi gave no hint of preparing for eventual retirement by anointing a likely successor.

Since taking over as party leader in late 2012, Mr. Xi has transformed China, purging potential rivals, crushing dissent and reasserting the central role of the Communist Party in Chinese society. Mr. Xi’s progress toward his new term has been hampered this year by China’s painful economic slowdown, spreading public frustration over the country’s strict Covid rules, and rumors of internal opposition.

The congress, however, seemed to brush all that aside with regimented acclaim for Mr. Xi, urging the party’s members to stay in lock step with him “in thought, politics and action.”

Mr. Xi’s keynote speech at the opening of the congress last Sunday signaled that he would press on with fortifying China against a plethora of perceived dangers. That includes stepping up efforts to turn China into a leading technology power, reducing reliance on Western know-how. He also said China would continue upgrading its already formidable national security apparatus.

Mr. Xi also bolstered his status when the congress approved amendments to the party charter — its foundational rules — to elevate his authority. A statement from the meeting said Mr. Xi’s leadership was essential to “eradicating grave hazards that were present inside the party, state and military,” apparently referring to corruption and disloyalty.

He is likely to face even less potential pushback to his policies after the congress approved the new membership list for the Central Committee, the elite body from which China’s top leaders are drawn.

Several senior figures stepped down, all but ensuring that more of Mr. Xi’s favored officials will rise into the Politburo Standing Committee, the party’s highest decision-making body. Mr. Xi’s enhanced control suggests China will maintain its tough stance toward Washington, and expand the party’s intervention in the economy, technology and the internet.

“There’s not a single sign of any fundamental revisions of policy,” said Richard McGregor, an expert on Chinese politics at the Lowy Institute in Sydney. “It’s all shoulders to the wheel.”

Mr. Xi’s new term and his leadership team will not be officially confirmed until Sunday, when the new Central Committee meets and holds a carefully controlled vote. But the scale of Mr. Xi’s victory was already clear from the Central Committee makeup, experts said.

The party congress is usually a choreographed affair, but the unexpected departure of the former leader, Hu Jintao, caused a brief stir. Mr. Hu, 79, had been seated next to Mr. Xi in the front row on the stage when, possibly unwell, he was helped to his feet by an aide and escorted out of the cavernous hall, without explanation. As he was led off the stage, Mr. Hu appeared to speak to Mr. Xi and to pat Li Keqiang, the premier, on his shoulder.

Mr. Li and two other top officials who had risen under Mr. Hu stepped down from the Central Committee, indicating that all three are set to retire. Mr. Li has served for the past decade as China’s premier, the second most powerful post in China, but Mr. Xi has overshadowed Mr. Li for years.

“There’s been a lot about the premier-as-savior talk — that these officials could stay around and push back against Xi, but obviously that’s not going to happen,” said Christopher K. Johnson, the president of the China Strategies Group and a former C.I.A. analyst of Chinese politics. “Proximity to Xi is all that really matters now.”

Hu Chunhua, currently a vice premier, still has a chance of entering the new Politburo Standing Committee, despite his lack of robust ties to Mr. Xi.

“If Hu Chunhua is promoted, he will be expected to be a loyal Xi acolyte like everybody else,” Mr. McGregor said. “There are no alternative centers of power centers left in the Standing Committee, if there ever were, even symbolically.”

Aside from Mr. Li, several others set to retire were senior leaders with a record of favoring market-oriented policies and a somewhat less confrontational stance toward the West. They included Wang Yang, a current Politburo Standing Committee member, as well as three top officials in finance: Liu He, Guo Shuqing and Yi Gang.

“The generation of financial technocrats with both professional training and deep connections with the global financial community is passing from the scene,” said Victor Shih, a specialist in China’s politics and finance at the University of California in San Diego. He said they were being “replaced by career provincial bankers who have a track record of executing the party’s policies.”

Cheng Li, a specialist in Chinese politics at the Brookings Institution, had a similar take. “Xi Jinping has further consolidated near-absolute power by promoting his protégés to the top leadership,” he said.

Under an informal rule that has applied to China’s leadership over the past two decades, senior officials 68 and older retired at party congresses, while those 67 or younger had a chance to stay on. But this time, Mr. Li, 67, and Mr. Wang, the same age, were both out. But Wang Huning, who recently turned 67, stayed on the Central Committee and is likely to remain a key political lieutenant to Mr. Xi, who is 69.

Officials seen as possible additions to the next Politburo Standing Committee include Li Qiang, the party chief of Shanghai, who oversaw its bruising Covid lockdown earlier this year. He was essentially Mr. Xi’s chief of staff when both worked in Zhejiang Province 15 years ago. Ding Xuexiang, currently a senior aide to Mr. Xi, is also a strong contender for elevation into the next top lineup.

The makeup of the new Central Committee suggested that Mr. Xi was generally happy with the handling of China’s diplomacy, military affairs and domestic security, several analysts said.

China’s ambassador to the United States, Qin Gang, was promoted to full membership in the Central Committee. He had worked closely with Mr. Xi as the foreign ministry’s head of protocol soon after Mr. Xi became China’s top leader, and now has a rank in the party that leaves him well positioned to play an even larger role in China’s foreign policy.

Mr. Xi kept on board Zhang Youxia, a military commander who, at age 72, had been widely expected to retire. General Zhang has been at the forefront of modernizing the People’s Liberation Army, and has combat experience in China’s border conflict with Vietnam from 1979.

“By pushing moderates and potential rivals out of the leadership, Xi conveys his overall priorities for sociopolitical stability, national security and policy continuity now and in the years to come,” said Mr. Li, the Brookings expert.