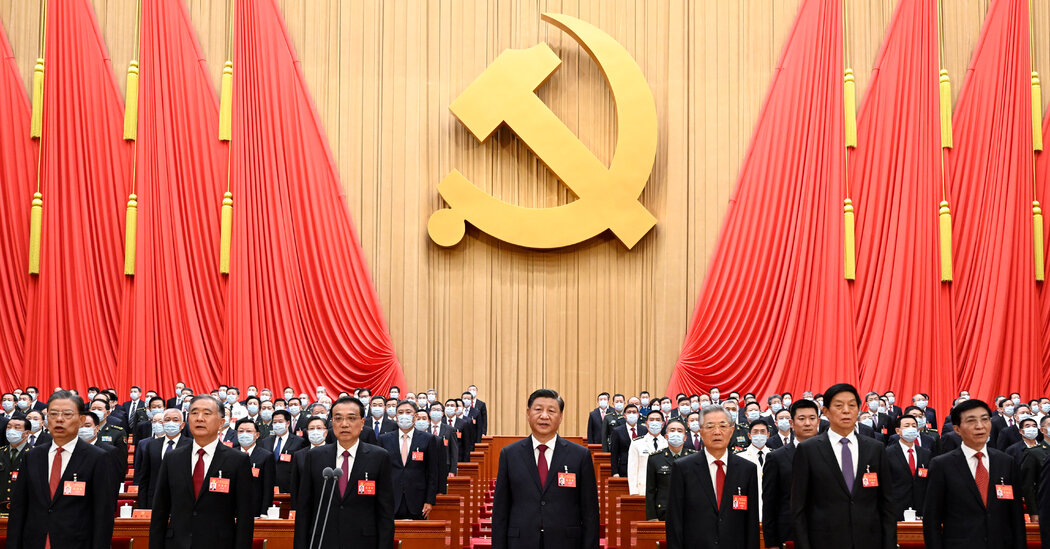 As China’s leader, Xi Jinping, laid out his priorities this week for a breakthrough third term in power, officials parsed his words for signs of where the country was headed. What he did not say was as revealing.

The omission of two phrases from his key report to a Communist Party congress exposed his anxieties about an increasingly volatile world where Washington is contesting China’s ascent as an authoritarian superpower.

For two decades, successive Chinese leaders have declared at the congress that the country was in a “period of important strategic opportunity,” implying that China faced no imminent risk of major conflict and could focus more on economic growth.

For even longer, leaders have said that “peace and development remain the themes of the era,” suggesting that whatever may be going wrong in the world, the grand trends were on China’s side.

But the two slogans, so unvarying that they rarely drew attention, were not in Mr. Xi’s report to the congress, which began last Sunday and ended Saturday. Not in his 104-minute speech summarizing the report. Nor in the 72-page Chinese full version given to officials and journalists.

Their exclusion, and Mr. Xi’s somber warning of “dangerous storms” on the horizon, indicated that he believed international hazards have worsened, especially since the start of the war in Ukraine in February, several experts said. Mr. Xi, who is nearly assured re-election on Sunday as its general secretary, sees a world made more treacherous by American support for the disputed island of Taiwan, Chinese vulnerability to technology “choke points,” and the plans of Western-led alliances to increase their military presence around Asia.

“China’s external environment now can be described as unprecedentedly perilous, and that’s also the judgment of China’s high echelon,” Hu Wei, a foreign policy scholar in Shanghai, said in an interview.

In the Communist Party, the leader’s words matter enormously, shaping China’s policies, legislation and diplomacy. And the report to the party congress, every five years, is the fundamental guide for officials. Each phrase, each tweak, each omission is weighed to signal priorities.

In his report, Mr. Xi said several times that China intended to contribute more to global peace and development through its own initiatives, and discussed “strategic opportunities” for trade and diplomatic gains. But his assessment of global trends was laced with warnings.

“Our country has entered a period when strategic opportunity coexists with risks and challenges, and uncertainties and unforeseen factors are rising,” Mr. Xi said. Although China has room for international growth and initiative, he added, “the world has entered a period of turbulence and transformation.”

“This marks a meaningful, and perhaps major, shift in their assessment of the global order,” said Christopher K. Johnson, the president of the China Strategies Group and a former C.I.A. analyst of Chinese politics. “He’s basically hardening the system because the likelihood of conflict is going up.”

During the congress, Mr. Xi did not publicly mention the United States, nor President Biden’s new national security strategy that describes China as the pre-eminent threat to American primacy. But to Chinese officials, the implied focus will be clear.

Mr. Xi’s warnings have also reflected his underlying political message to the congress: I told you so.

He has positioned himself as the prophetic statesman who in his decade-long rule beat back proliferating threats to China’s rise while overhauling its fractured military and security forces. He has been the leader who toughened up China’s diplomacy, foreseeing that jealous rival powers would try to, as he said in his report, “blackmail, contain, blockade and exert maximum pressure on China.”

The party is promoting Mr. Xi as the nation’s “navigator” for the intensifying threats, The outcome of the congress on Saturday made clear that Mr. Xi will stay in power beyond the 10 years his predecessor served, and also install a new leadership team dominated by his firm allies.

That new team, to be unveiled on Sunday, is likely to elevate officials whom Mr. Xi believes will serve his call to “struggle,” by their loyalty to him and the party, and their ability to advance programs to upgrade high-tech, military modernization and social controls.

Already, People’s Liberation Army commanders and senior officials at the congress have urged China to rally around Mr. Xi’s plans to upgrade the military, accelerate technological self-reliance and strengthen ideological indoctrination to ward off subversive ideas among the young.

Mr. Xi had “carried out a historic rescue, reshaping and transformation” of the People’s Liberation Army forces, Gen. Xu Qiliang told military delegates at the congress. “In all actions, absolutely obey the command of Chairman Xi,” he said, using Mr. Xi’s title as head of the military.

In his report, Mr. Xi laid out some of his plans to secure China’s global rise, many building on current policy directions.

Beijing, he said, would also become more active in international affairs and promote its own solutions for global security and development challenges. He repeated that China wanted to win control of Taiwan peacefully, but could use force if compelled.

Mr. Xi’s new phrases had signaled that China must become more nimble, Wang Wen, the executive dean of the Chongyang Institute for Financial Studies in Beijing, said in written responses to questions.

“We can’t just passively sit back and enjoy a ‘period’ of strategic opportunity,” he said, “and have to actively shape and seize more opportunities.”

Mr. Xi’s report also represented another step in jettisoning language and assumptions from China’s era of market changes and friendly diplomacy with the West.

The phrase that “peace and development” were era-defining themes took hold in the 1980s, when Deng Xiaoping’s generation of leaders introduced economic liberalization and fostered ties with Washington, Tokyo and other former foes, said Yong Deng, a political science professor at the U.S. Naval Academy who wrote “China’s Strategic Opportunity.”

It implied that China “had the permissible international environment to focus on modernizations through reforms and opening,” he said, noting that he did not speak for the navy.

Another leader, Jiang Zemin, first declared in 2002 that China could enjoy about two decades of “strategic opportunity” — free of serious risk of major conflict — soon after he had won its entry into the World Trade Organization. It was a time of expanding commerce and hopes abroad that China would increasingly liberalize, in politics as well as business. Beijing encouraged talk of China’s “peaceful rise.”

Even later last year, Mr. Xi and other senior officials stuck to the formula that China was still in a time of strategic opportunity, while expressing apprehension about geopolitical and economic risks. The two slogans appeared in a textbook issued to officials in April, reflecting contents of Mr. Xi’s secret national security strategy. In late August, the party’s leading doctrinal journal published a speech that Mr. Xi made in 2020 that hinted at internal debate.

Mr. Xi’s worries about external risks appeared to come to head in the first half of 2022, after Russia’s invasion of Ukraine and NATO’s galvanization to support Kyiv, an examination of Chinese officials’ speeches and policy documents indicates.

The war in Ukraine, global tensions over the coronavirus pandemic and Washington’s tough approach to Beijing intensified debate in China about whether it still had a “period of strategic opportunity,” said Mr. Wang, who recently published a paper on the issue.

“The impact from Russia-Ukraine was that it was a rehearsal for U.S. containment of China,” Mr. Wang said in written answers to questions, reflecting a widespread view in China.

Mr. Xi flagged in a speech in late July that his views had significantly changed to prepare officials for the congress. China still has many opportunities for growth, he said, but he also noted the “dangers and challenges” ahead.

“While some of China’s responses to growing challenges were no doubt already underway before the congress,” said David Gitter, the president of the Center for Advanced China Research, “the dropping of the terms noted will inject new impetus and assertiveness in a way visible from outside China.”

Mr. Xi’s draft report to the congress was endorsed by its nearly 2,400 delegates on Saturday, but the finalized version was not immediately released. There is still some chance that the reassuring stock phrases will be restored in the final version. But making that change now could signify elite discord over a major issue, something that Mr. Xi would not welcome.

Neither phrase has surfaced in other officials’ comments from the congress.