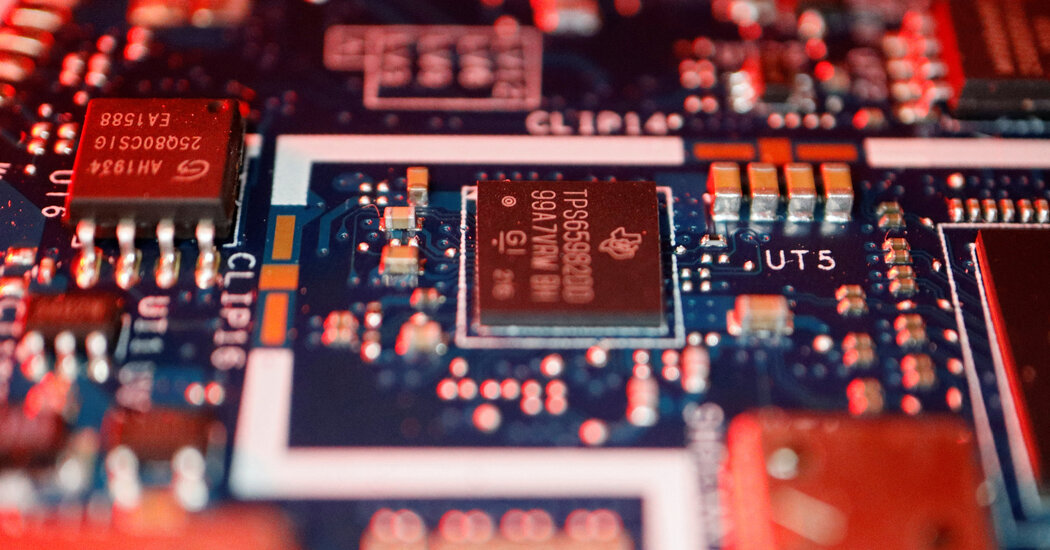 The latest chips — the sort that power supercomputers and high-end smartphones — are densely packed with transistors so small they’re measured in nanometers. Perhaps the only things more ingenious than the chips themselves are the machines that are used to build them. These devices are capable of working on almost unimaginably tiny scales, a fraction of the size of most viruses. Some of the chip-building machines take years to build and cost hundreds of millions of dollars each; the Dutch company ASML, which makes the world’s only lithography machines capable of inscribing designs for the fastest chips, has produced just 140 such devices over the past decade.

Which brings us to another amazing detail about microchips: They are a triumph not just of technology but also of global trade and cooperation. In the recently published “Chip War: The Fight for the World’s Most Critical Technology,” Chris Miller, a history professor at Tufts University, describes the geographic sprawl of the semiconductor supply chain:

A typical chip might be designed with blueprints from the Japanese-owned, U.K.-based company called Arm, by a team of engineers in California and Israel, using design software from the United States. When a design is complete, it’s sent to a facility in Taiwan, which buys ultrapure silicon wafers and specialized gases from Japan. The design is carved into silicon using some of the world’s most precise machinery, which can etch, deposit and measure layers of materials a few atoms thick. These tools are produced primarily by five companies, one Dutch, one Japanese and three Californian, without which advanced chips are basically impossible to make. Then the chip is packaged and tested, often in Southeast Asia, before being sent to China for assembly into a phone or computer.

The fragility of this convoluted process became apparent in last year’s Covid-induced chip shortage, which the White House has estimated cost the United States a full percentage point of economic output, or hundreds of billions of dollars. But there is also something elegant and even comforting about the global diversity of the chip business. As with oil or aircraft carriers or nuclear weapons, the question of who controls the semiconductor industry carries geopolitical significance. Chips are crucial ingredients not just in smartphones and laptops but in just about everything in the modern world — including, importantly, weapons, surveillance technology and artificial intelligence systems. Dominance of the industry in the wrong hands could be disastrous.

That’s why I have been so impressed with the aggressive and creative way the Biden administration has gone about curtailing China’s alarming, decades-long effort to build a domestic semiconductor industry that’s independent from the rest of the world. This month, the Commerce Department announced a set of restrictions that prevent China from getting much of what it needs to establish a commanding position in the chip business. The government said the rules were meant to block “sensitive technologies with military applications” from being acquired by China’s military and security services. With few exceptions, the sanctions prohibit China from buying the best American chips and the machines to build them, and even from hiring Americans to work on them. Analysts I spoke to said the rules will devastate China’s domestic chip industry, potentially setting it back decades.

The rules “are an absolute historical landmark,” said Gregory Allen, a fellow at the Center for Strategic and International Studies and a former director of A.I. strategy at the Department of Defense. In a recent report, Allen writes that Biden’s restrictions “begin a new U.S. policy of actively strangling large segments of the Chinese technology industry — strangling with an intent to kill.” Considering the ways China might use the advanced chips — including in expanding its dystopian, A.I.-powered surveillance and repression regime — the strangulation is justified.

Semiconductors are one of the few sectors for which China still depends on the rest of the world; the country spends more money importing microchips each year than it does oil. The Chinese government has invested billions of dollars to “indigenize” the industry, but its progress has been slow. And in some of the most advanced areas of the business, Chinese semiconductor manufacturers lag far behind their international competitors.

Allen says that until now, most American restrictions on China’s access to the best semiconductors were aimed primarily at the Chinese military. But China’s corporations are closely allied with China’s military, enabling the military to easily evade restrictions. The new policy should make that substantially harder, as its restrictions apply to any entity in China, whether a branch of the military or a theoretically “civilian” corporation.

And the rules don’t bar just China from buying American semiconductor tech. Through the Foreign Direct Product Rule, parts of the regulations apply to any company in the world that uses American semiconductor technology. So if a non-American chip manufacturer agrees to make Chinese-designed chips, it could lose access to American chip-making machines that it can’t get anywhere else.

Finally, there are the restrictions on American personnel. China is desperately short on engineers and executives with expertise in the semiconductor business, and many of its companies in the sector employ Americans in high-ranking positions. The new restrictions prohibit all “U.S. persons” — both American citizens and green card holders — from continuing to work in the Chinese semiconductor industry. (The rules allow people to apply for waivers to the policy.)

How can China respond? One way is by evading the rules. The country has long been masterful at getting around sanctions, and microchips are small and potentially easy to smuggle. It’s also not clear how well the Bureau of Industry and Security, the Commerce Department agency in charge of export controls, will be able to enforce the rules. “The B.I.S.’s to-do list has increased massively, and their budget hasn’t really increased at all,” Allen told me.

Allen also warned that we don’t know how grave a provocation China might consider these rules. He pointed out that in the run-up to the attack on Pearl Harbor, it was America’s refusal to sell oil to Imperial Japan that led the latter to conclude that it was “functionally at war” with the United States. The semiconductor rules are narrower than our oil restrictions on Japan were. “But will China see it that way?” Allen asked. “I kind of doubt it.”

On the other hand, what choice does the United States have?

“These technologies are going to be the foundation of economic strength over the next decades, and there are significant concerns about what the world would look like if China gained the upper hand,” Martijn Rasser, a senior fellow at the Center for a New American Security, told me. “It wouldn’t be a world that I would want to live in, and I don’t think most Americans or most of our friends and allies would want to live in it either.”

Farhad wants to chat with readers on the phone. If you’re interested in talking to a New York Times columnist about anything that’s on your mind, please fill out this form. Farhad will select a few readers to call.