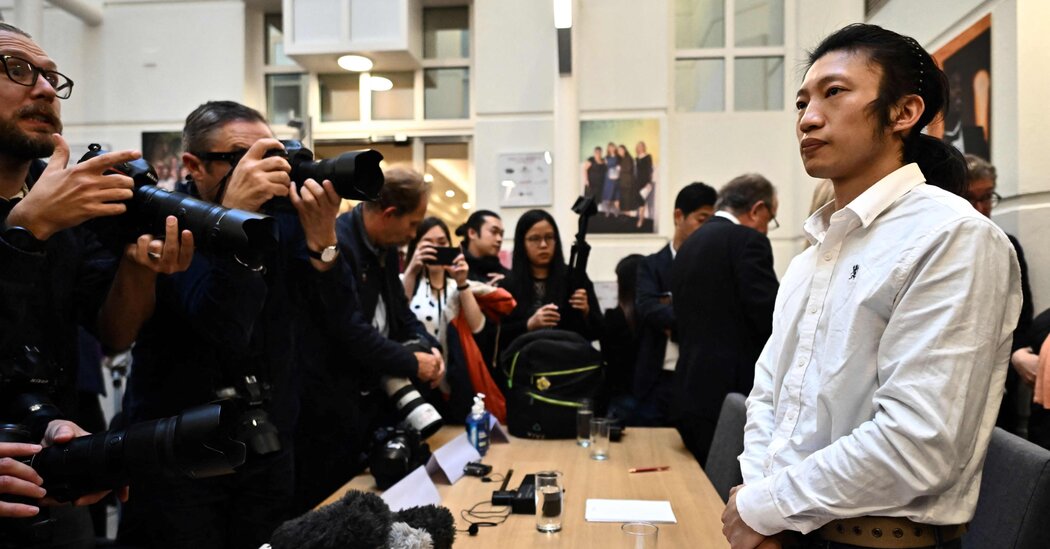 LONDON — The rally outside the Chinese Consulate in Manchester, in northern England, began like others before it, with demonstrators against repression in Hong Kong hanging banners and preparing to shout slogans.

But the scene turned violent on Sunday after a group of men emerged from the consulate, removed a poster of Xi Jinping, China’s leader, and then dragged one protester through the gates. They kicked and beat him as police officers and other protesters rushed to separate them. Journalists at the scene caught the melee on video seen around the world.

On Wednesday in London, the protester, Bob Chan, gave an account to reporters of the attack. Mr. Chan said he had been trying to stop the men from the consulate from tearing down banners, including one featuring Mr. Xi wearing only a crown and underwear, when he was pulled into the consulate grounds. During the assault, which he said left bruises on his eyes, neck, head and back, he felt men kicking him and his hair being pulled.

“I am shocked and hurt by this unprovoked attack,” he said, adding that the assault stopped only when a police officer intervened. “I never thought something like this could happen to me in the U.K.”

“What happened to me is unjust,” he added in an interview. “Nobody should go through it.”

As footage of the assault spread this week, there is growing outcry and alarm among British lawmakers and activists in Britain’s fast-growing Hong Kong community over what they have called an appalling attempt by the Chinese government to quash political dissent and freedom of speech abroad. Chinese officials, in contrast, have characterized the clash as an illegal attempt to storm the consulate and said the banners displayed were “insulting.”

This abuse took place not in Hong Kong or elsewhere in China, but in a country that many former residents of Hong Kong have made their home, thanks in part to a new visa program that gives migrants a pathway to residency. And it has shaken newcomers who decided to uproot their lives in exchange for democratic freedoms. Since its introduction in January 2021, more than 140,500 people have applied for the visa, according to government data.

“It puts a big question mark in the Hong Kong community,” said Nathan Law, a pro-democracy activist from Hong Kong who was granted political asylum in Britain. Many people, himself included, would now wonder if they could be dragged into an embassy and disappear if they chose to protest, he said.

Mr. Law said the episode was a major test of whether the British government, with its welcoming rhetoric, could truly stand up to China to protect Hong Kong people. “Actions speak louder than words,” he said.

The Greater Manchester Police, who are investigating the episode, said on Wednesday that they had not made any arrests. They have confirmed that what began as a peaceful protest by about 30 people escalated, and that a man in his 30s was dragged into the consulate, suffering injuries.

As the outcry has grown, Britain’s Foreign Office said it had summoned China’s chargé d’affaires, Yang Xiaoguang, to demand an explanation for the “shocking” scene.

Lawmakers from both Labour and Conservative parties on Wednesday said the episode was a wake-up call, denouncing the government’s response as inadequate and calling for an official investigation and the expulsion of any consulate staff members who had been involved.

“We have to show this is intolerable,” said Iain Duncan Smith, a former Conservative Party leader. “Other countries will see us act weakly, and they will act weakly in turn.”

Others, including Alicia Kearns, chairwoman of the Foreign Affairs Committee in Parliament, have accused the consul general, Zheng Xiyuan, of participating in the scuffle, but so far the government has not confirmed that claim. The allegation has fueled calls to declare Chinese officials “persona non grata” if found responsible and even prosecute them.

Mr. Zheng told local news outlets in Manchester that he had gone outside during the clash, but was not involved. The Chinese Consulate in Manchester did not immediately respond to a request for comment.

“The U.K. Foreign Office should take it very seriously,” said Wing Tat Lee, a former lawmaker for Hong Kong’s legislative council who now lives in Britain. He said he wanted the government to investigate reports of Hong Kong political activists and others being stalked by pro-Beijing agents. “It’s spreading fear,” he said.

Steve Tsang, director of the SOAS China Institute at the University of London, said it was reasonable for the British government to defer a formal response until it had independently confirmed what happened.

“They don’t want to create a situation where an immediate, quick, strong response simply results in British citizens being taken hostage,” he said.

On Wednesday, Wang Wenbin, a spokesman for China’s Foreign Ministry, said in Beijing that the ministry had lodged a formal complaint with Britain over what it described as “malicious harassment by lawless elements,” according to Reuters. “The peace and dignity of Chinese embassies and consulates abroad must not be violated,” he said in earlier comments.

Mr. Chan, the protester, who moved last year to Manchester from Hong Kong, said that when he was dragged through the consulate gates, his mind at first went completely blank. But as he was being beaten, he worried that he would be seriously injured or killed.

“I fear I may be silenced by the powers that be,” said Mr. Chan. “I fear for the safety of my family.” But he said he would continue speaking out on behalf of Hong Kong people back home who could not, adding, “I believe the British government can protect me.”

With the Communist Party Congress underway in Beijing, where Mr. Xi is expected to secure a third term as leader, Mr. Tsang, of the SOAS China Institute, said the episode was a sign that Beijing was emboldening diplomats and others in the Chinese establishment to take a harsher stance abroad against dissent.

If Chinese officials were responsible, he said, it would be the first attack of its kind by Chinese consular staff in a host country since the Cultural Revolution in the 1960s and ’70s.