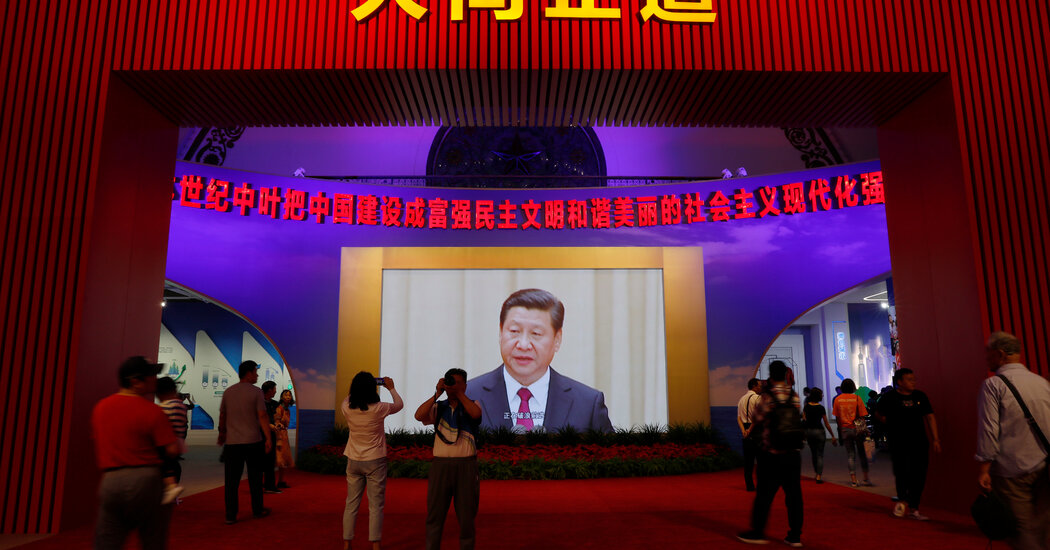 WASHINGTON — In conversations with American executives this spring, top officials in the Biden administration revealed an aggressive plan to counter the Chinese military’s rapid technological advances.

China was using supercomputing and artificial intelligence to develop stealth and hypersonic weapons systems, and to try to crack the U.S. government’s most encrypted messaging, according to intelligence reports. For months, administration officials debated what they could do to hobble the country’s progress.

They saw a path: The Biden administration would use U.S. influence over global technology and supply chains to try to choke off China’s access to advanced chips and chip production tools needed to power those abilities. The goal was to keep Chinese entities that contributed to potential threats far behind their competitors in the United States and in allied nations.

The effort, no less than what the Americans had carried out against Soviet industries during the Cold War, gained momentum this year as the United States tested powerful economic tools against Russia as punishment for its invasion of Ukraine, and as China broke barriers in technological development. The Russian offensive and Beijing’s military actions also made the possibility of a Chinese invasion of Taiwan seem more real to U.S. officials.

The administration’s concerns about China’s tech ambitions culminated last week in the unveiling of the most stringent controls by the U.S. government on technology exports to the country in decades — an opening salvo that would ripple through global commerce and could frustrate other governments and companies outside China.

This account of how President Biden and his aides decided to wage a new global campaign against China, which contains previously unreported details, is based on interviews with two dozen current and former officials and industry executives. Most spoke on the condition of anonymity to discuss deliberations.

The measures were particularly notable given the Biden administration’s preference for announcing policies in tandem with allies to counter rival powers, as it did with sanctions against Russia.

With China, the administration spent months in discussions with allies, including the Dutch, Japanese, South Korean, Israeli and British governments, and tried to persuade some of them to issue restrictions alongside the United States.

But some of those governments have been hesitant to cut off important commerce with China, one of the world’s largest technology markets. So the Biden administration decided to act alone, without public measures from allies.

Gregory C. Allen, a former Defense Department official who is now at the Center for Strategic and International Studies, said the move came after consultation with allies but was “fundamentally unilateral.”

“In weaponizing its dominant choke-point positions in the global semiconductor value chain, the United States is exercising technological and geopolitical power on an incredible scale,” he wrote in an analysis.

The package of restrictions allows the administration to cut off China from certain advanced chips made by American and foreign companies that use U.S. technology.

U.S. officials described the decision to push ahead with export controls as a show of leadership. They said some allies wanted to impose similar measures but feared retaliation from China, so the rules from Washington that encompass foreign companies did the hard work for them.

The measures do not directly restrict foreign makers of semiconductor equipment from selling products to China. But experts said the absence of the American equipment would most likely impede China’s nascent industry for making advanced chips. Eventually, though, that leverage could fade as China develops its own key production technologies.

Some companies have chafed at the idea of losing sales in a lucrative market. In a call with investors in August, an executive at Tokyo Electron in Japan said the company was “very concerned” that restrictions could prevent its Chinese customers from producing chips. ASML, the Dutch equipment maker, has expressed criticisms.

Applied Materials, an American equipment maker, this week slashed its outlook for its revenue and profit; TSMC, a Taiwanese chip maker, cut its forecasts for capital expenditure. Both companies said demand for semiconductor products was set to flag.

China could respond by punishing foreign companies with operations there. And the way Washington is imposing the rules could strain U.S. alliances, some experts say.

“Sanctions that put the United States at odds with its allies and partners today will both undercut their effectiveness and make it harder to enroll a broad coalition of states in U.S. deterrence efforts,” said Jessica Chen Weiss, a professor of government at Cornell University and a recent State Department official.

Others have argued the moves did not come soon enough. For years, U.S. intelligence reports warned that American technology was feeding China’s efforts to develop advanced weapons and surveillance networks that police its citizens.

Mr. Sullivan and other officials began pushing to curb sales of semiconductor technology, according to current and former officials and others familiar with the discussions.

But some officials, including Commerce Secretary Gina Raimondo and her deputies, wanted to first secure the cooperation of allies. Starting late last year, they said in meetings that by acting alone, the United States risked harming its companies without doing much to stop Chinese firms from buying important technology from foreign competitors.

Even as the Trump administration took some aggressive actions against Chinese technology, like barring international shipments to Huawei, it began quiet diplomacy on semiconductor production equipment. U.S. officials talked with their counterparts in Japan and then the Netherlands — countries where companies make critical tools — on limiting exports to China, said Matthew Pottinger, a deputy national security adviser in the Trump administration.

Biden administration officials have continued those talks, but some negotiations have been difficult. U.S. officials spent months trying to persuade the Netherlands to prevent ASML from selling older lithography machines to Chinese semiconductor companies, but they were rebuffed.

U.S. officials carried out separate negotiations with South Korea, Taiwan, Israel and Britain on restricting the sale and design of chips.

Outside of the diplomacy, there was increasing evidence that a tool the United States had used to restrict China’s access to its technology had serious flaws. Under President Donald J. Trump, the United States added hundreds of companies to a so-called entity list that prohibited American companies from selling them sensitive products without a license.

But each listing was tied to a specific company name and address, making it relatively easy to evade the restrictions, said Ivan Kanapathy, a former China director for the National Security Council.

Huawei could soon face additional restrictions: The Federal Communications Commission is expected to vote in the coming weeks on rules that would block the authorization of new Huawei equipment in the United States over national security concerns.

Biden officials also believed the restrictions issued by the Trump administration against Semiconductor Manufacturing International Corporation, a major Chinese chip maker known as SMIC, had been watered down by industry and were allowing too many sales to continue, people familiar with the matter said.

In a call with heads of American semiconductor equipment makers in March, Mr. Sullivan said that the United States was no longer satisfied with the status quo with China, and that it was seeking to freeze Chinese technology, said one executive familiar with the discussion.

Mr. Sullivan, who had dialed into the call alongside Ms. Raimondo and Brian Deese, the director of the National Economic Council, told executives from KLA Corporation, Applied Materials and Lam Research that rules restricting equipment shipments to China would be done with allies, the executive said.

As negotiations with allied governments continued, experts at the Commerce, Defense, Energy and State Departments spent months poring over spreadsheets listing dozens of semiconductor tools made by U.S. companies to determine which could be used for advanced chip production and whether companies in Japan and the Netherlands produced comparable equipment.

Then in July came alarming news. A report emerged that SMIC had cleared a major technological hurdle, producing a semiconductor that rivaled some complex chips made in Taiwan.

The achievement prompted an explosion of dissatisfaction in the White House and on Capitol Hill with U.S. efforts to restrain China’s technological advancement.

The Biden administration took action in August to clamp down on China’s semiconductor industry, sending letters to equipment manufacturers and chip makers barring them from selling certain products to China.

Last week, the administration issued the ‌rules with global reach.

Companies immediately began halting shipments to China. U.S. officials have said they will issue licenses on a case-by-case basis so that companies from the United States and allied countries — like Intel, Samsung and SK Hynix — can send technology to their China-based factories. SK Hynix, based in South Korea, announced on Tuesday that the U.S. government had authorized it to supply equipment and items to its facilities in China for one year without additional licensing.

The controls could be the beginning of a broad assault by the U.S. government, Mr. Pottinger said.

“The Biden administration understands now that it isn’t enough for America to run faster — we also need to actively hamper the P.R.C.’s ambitions for tech dominance,” he said, referring to the People’s Republic of China. “This marks a serious evolution in the administration’s thinking.”