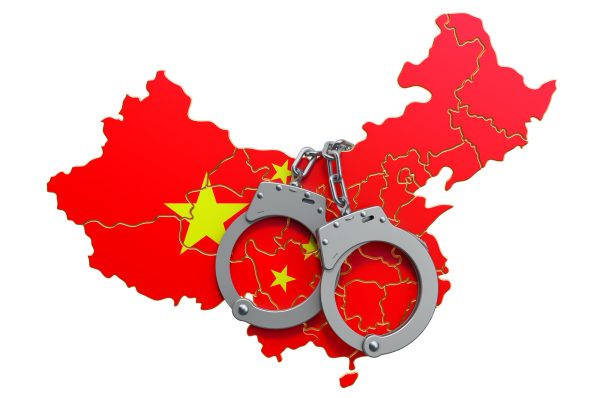 In the lead up to the 20th National Congress of the Chinese Communist Party on October 16, all eyes will be on one man: Xi Jinping.

To pave the way for a smooth Party Congress, the CCP has gone to extreme efforts to crack down on any sources of what it perceives as “social instability” ahead of the Congress

But even still, a rare street protest that broke out in Beijing on October 13 showed how tension is building against Xi’s rule just under the surface.

A lone protester spread a banner over a bridge that read: “We want food, not COVID testing; We want reform, not the Cultural Revolution; We want freedom, not lockdowns; We want to vote, not a leader; We want dignity not lies; we are citizens not slaves.” Another banner read, “Depose the traitorous dictator Xi Jinping.”


The protest, like all others, was quickly disrupted by authorities and mentions of it were censored online. It’s unclear as of this writing what happened to the protester, but based on the party’s usual treatment of Xi’s critics punishment is likely to be harsh.

In the hagiographic narrative of state media, China has only gone from victory to victory under the leadership of Xi Jinping. The whole party is compelled to study Xi Jinping Thought. And, as such, Xi is widely expected to take on a precedent-breaking third term as general secretary of the Chinese Communist Party during the 20th Party Congress next week.

To be sure, over the last 10 years since Xi came to power, the Chinese government has made some limited progress. Its comprehensive power has increased, its air quality has improved, and China has made some strides in terms of climate change commitments.

But Xi Jinping has also made a series of avoidable domestic and foreign policy blunders that will undoubtedly hobble China for generations to come.

Crucially, at every turn, there have been human rights defenders who have bravely spoken out against Xi’s mistakes.

Foreign Minister Wang Yi once asserted that it is “the Chinese people” who are in the best position “…to have a say about China’s human rights situation,” but rather than embracing constructive criticism from the Chinese people, the CCP under has gone to extraordinary lengths to silence its human rights critics.

Take the case of Ji Xiaolong.

Ji, a Shanghai dissident, was detained and then arrested after he called on the Shanghai party secretary to step down in light of the “humanitarian disaster” caused by the city’s three-month lockdown in the spring of 2022. He also criticized Xi’s “wild ambition” for amending the constitution and trying to cling to power.

Ji was summoned by police seven times in 2022 for speaking out about the real life, disastrous impacts of Xi’s “zero-COVID” strategy that he saw all around him in Shanghai.

Most economists now think the “zero-COVID” policy has been severely detrimental for the Chinese economy, with the World Bank lowering its forecast for Chinese growth from 5 percent down to 2.8 percent. Some observers think the economic crisis is so bad that China is no longer expected to overtake the United States as the largest economy.

But it’s not just economic mismanagement where Xi’s reign has been damaging. Take the case of the rule of law, as epitomized by Li Yuhan.

Li, has been stuck in pre-trial detention for nearly five years. She suffers from seven serious medical issues, including heart disease. The 65-year-old woman has been forced to eat vegetables on pans that other inmates at her detention center have urinated on.

But Li Yuhan is not some sort of hardcore criminal: She was just a lawyer doing her job.

Li had defended fellow human rights lawyer Wang Yu, whose surprising arrest on July 9 of 2015 kicked off the Chinese government’s then-unprecedented nationwide campaign to detain and silence nearly 300 legal professionals, in what was latter dubbed the 709 Crackdown.

In essence, the 709 Crackdown showcased one of Xi Jinping’s greatest mistakes: his choice to not follow a rule-of-law based system. Xi could have chosen to make China more compliant with international human rights law, in which the law holds power, including political parties, accountable.

Instead, rather than putting “power in a cage,” as Xi suggested early in his term, he chose to consolidate a system in which “law” serves mainly to entrench CCP power, and by extension, his personal power. As party documents euphemistically put it, “socialist rule of law must uphold the party’s leadership.”

This is 100 percent cage-free power.

Human rights lawyer Wang Yu’s treatment is also instructive. Wang had once served as lawyer for Ilham Tohti, an economist and arguably the most famous Uyghur intellectual at the time who was dedicated to increasing mutual understanding between the dominant Han Chinese and Uyghurs. Wang represented the willingness of Han people to protect the rights of everyone, including Uyghurs.

Ilham Tohti’s persecution and life sentence in 2014 foreshadowed Xi’s eventual descent into committing a series of dreadful abuses against Uyghurs and other predominantly Muslim ethnic minorities that have shaped the course of history.

On August 31, the United Nations released its assessment of the human rights situation in Xinjiang, which noted that the Chinese government “may be committing crimes against humanity.” The report also pointed out that none of the Uyghurs interviewed by the U.N. who were deprived of liberty and placed in “re-education camps” had access to lawyers of their choice.

Indeed, to the best of CHRD’s knowledge, no Uyghur intellectuals since Ilham Tohti have had access to any lawyers of their choice, in defiance of China’s own Criminal Procedure Law and Constitution.

The lawless nature of raw party power in Xinjiang obviously makes a mockery out of Xi’s notion of China being “ruled according to the law.”

Thus, to some extent, Xi’s crackdown on human right defenders, particularly the legal community, paved the way for his making mistakes of enormous historical consequences in Xinjiang, where the widespread crimes against humanity, including the likelihood of forced labor, would inevitably fracture relations with the West and have an impact on China’s positions in global supply chains.

Moreover, how will millions of Uyghurs, who were detained extrajudicially and subjected to unspeakable abuses, including torture and rape, feel about the people who detained and tortured them? How will the Uyghur generations to come process these horrors?

Rather than listening to well-meaning criticism from moderate intellectuals like Ilham Tohti, and resolving contentious issues through dialogue, Xi has subjected millions to deprivation of liberty, violence, surveillance, and coercion. Xi has deepened the grievances that fuel ethnic conflict and exacerbated a problem that future generations of Chinese leaders will be dealing with long after he has left the scene.

What might have happened if Xi had listened to people like Xu Zhiyong and Ding Jiaxi, who were advocates for a democratic China based on the rule of law? It’s possible there would have been a much greater degree of true ethnic harmony, and a less fractured relationship with Western countries. Unfortunately, however, Xu and Ding are languishing in detention after being subjected to secret trials.

At the 20th Party Congress, the world will likely witness a literal “yi yan tang,” a hall in which only one voice is effectively permitted to speak: the voice of Xi Jinping. The CCP has created an incentive structure in which sycophantic “yes men” only repeat the “thoughts” of the idiosyncratic dictator to prove their loyalty.

This is group think by design and could lead to even greater policy disasters.

For the CCP to course correct and recover its famed dynamism, it could start by actually listening to the “Chinese people,” particularly China’s brave human rights defenders.