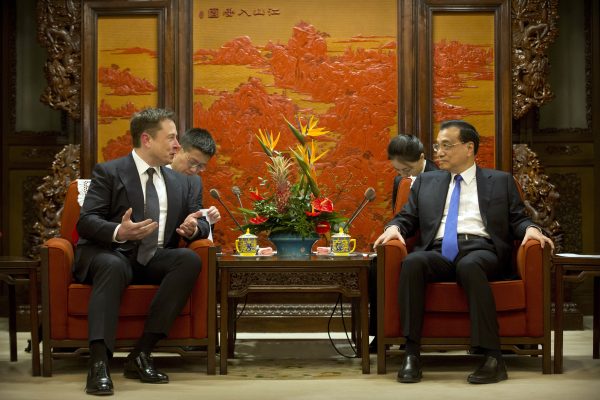 Elon Musk, the businessman behind Tesla, SpaceX, and many other innovative and successful ventures, is equally well known for his controversial comments, whether posted on Twitter or other channels. The most recent example is his recommendation to “figure out” a special administrative zone for Taiwan, one that is “reasonably palatable” and, he thinks “possibl[y]” or even “probably” could be “more lenient than Hong Kong.”

Given that his comment was featured in a “Lunch with the FT” interview with the Financial Times, a more casual and wide-ranging discussion over the course of a meal, one might first suspect that his remark could have been off-the-cuff, throwaway comment. However, the editor of the Financial Times, Roula Khalaf, who conducted and wrote up the interview, reported that her question about China and the risks to Tesla’s Shanghai mega-factory was met with “the longest silence” before answering, suggesting that Musk’s comments relating to China might have been more deliberate than others.

The naïveté of Musk’s recommendation is easy to see. Public opinion in Taiwan has consistently been against Beijing’s “One Country, Two Systems” formula in recent decades, and increasingly so since the crackdowns in Hong Kong. At the same time, Musk chose to overlook the way that China reneged on its promises of democracy, freedom, and a high degree of autonomy for Hong Kong over the course of the last three decades.

From FT’s report, Musk’s proposal for Taiwan was based on his worries about the fallout of the region’s “inevitable” conflict. Though Musk assumed he would still be able to produce cars in Shanghai for Chinese customers – a belief which the interviewer noted as “curious” – he warned that other companies like Apple would be “in deep trouble” and further estimated that the global economy would take a “30 per cent hit.” In other words, his concerns are purely economic, although his proposed solution is definitively political.


Predictably, reactions from Taiwan were lopsidedly negative. As the 2022 mayoral elections across Taiwan are to take place in late November, numerous incumbents and challengers from both sides of the island’s political spectrum jumped at the opportunities to lash out at Musk, while reiterating Taiwan’s insistence on its autonomy, democracy, human rights, and freedom. Even former President Ma Ying-jeou, famous for his outreach to China during his tenure, said that Musk’s proposal was based on “One Country, Two Systems” and so must be unacceptable.

The Mainland Affairs Council of the Taiwan government also flatly rejected Musk’s idea by saying that Taiwan is not a target of commercial transaction or merger and acquisition. Instead, the MAC said it would “welcome” Musk and other global business figures to visit Taiwan to find out for themselves the difference between its innovative economy based on freedom and democracy, compared with communist market control based on coercion and repression.

Even China’s reaction was not entirely positive. The Ministry of Foreign Affairs responded by emphasizing that the Taiwan issue is a matter of internal affairs, implying that Musk’s meddling was not welcomed, while the state-owned CCTV’s news broadcast plainly accused Musk of making “inappropriate comments.” However, a day later, China’s attitude seemed to have softened. The MFA spokesman said he was “glad” to see more people understand and support “peaceful reunification” and “One Country, Two Systems.”

Meanwhile, Qin Gang, China’s ambassador to the United States, went on Twitter to “thank” Musk “for his call for peace across the Taiwan Strait,” and took pains to highlight how similar Musk’s proposal was to China’s own “basic principles for resolving the Taiwan question.”

There is more to this story than Musk’s ill-advised proposal for Taiwan, however. In the FT interview, Musk was also quoted as saying that “Beijing has made clear its disapproval of his recent rollout of Starlink in Ukraine to help the military circumvent Russia’s cut-off of the Internet,” and that “Beijing sought assurances that he would not sell Starlink in China.” Inadvertently or not, Musk may have leaked information about his communications with Chinese officials that Beijing would consider confidential or even a “state secret.” This may well be what initially irked Beijing.

If China were to ban SpaceX’s Starlink sales in the mainland, or even Hong Kong, for that matter, it has all the power to do so, and does not need Musk’s assurances that he would not sell it. What this comment must mean is Musk committed not to sell Starlink in Taiwan, which Beijing considers to be a sovereign part of China.

Coincidentally, Taiwan’s government is set to initiate a $17 million (NT$550 million) trial satellite program for network resiliency to keep the island’s central command systems running if conventional connections are cut. While the program is only at its funding stage, authorities are believed to be considering various satellite options, including low Earth orbit (LEO) satellites that Starlink is based on. After Musk’s disclosure, should Taiwan still consider Starlink a viable, safe, and secure option? Probably not.

When Musk first announced his Starlink deployment to support Ukraine, many of my friends were hopeful that he could do the same one day for Taiwan in the event of a cyber cutoff by China, or for Hong Kong facing more looming threats of censorship. I would caution them and say, “It’s not so easy.”

Think of Musk’s Tesla Shanghai mega-factory, the volume of cars he sells in China, and the friends he has made in the Chinese government. How many U.S. executives or Big Tech tycoons can take the Chinese ambassador for a drive, or an auto-drive, as Musk did in Fremont, California, in March this year, and then be featured by China’s Ministry of Foreign Affairs website for his “dialogue” with the ambassador? Imagine if Mark Zuckerberg of Meta or Sundar Pichai of Google tried that – they would have been summoned for a few congressional roastings right away. Somehow, only Musk can get away with it all.

But now, Musk has publicly confirmed that China is seeking assurance that he would not sell Starlink in China, meant obviously to target Taiwan. The U.S. government should start to ask him questions, including, what Musk’s answer to Beijing was.

After all, the U.S. and European governments contributed financially to support Musk’s SpaceX to deliver thousands of Starlink terminals to Ukraine, making Musk at first a hero to Ukrainians. Also, after U.S. Secretary of State Antony Blinken tweeted that the U.S. would take action “to advance Internet freedom and the free flow of information” to Iranians, the U.S. Treasury updated its license guidelines to clear Starlink to obtain a sanctions exception to operate in Iran. With all the facilitation and support provided to SpaceX from the U.S. government, if it is disclosed that a foreign power has been influencing the company’s deployment in certain parts of the world with the intention to hinder internet freedom, the U.S. must find out what has happened between Musk, his companies, and this foreign power.

And the potential for Chinese influence to negatively impact U.S. national security goes beyond SpaceX and Tesla. Musk is again seeking to buy all of Twitter, after being sued by the social media company for reneging on his original proposed deal. Shouldn’t Musk’s connection with China warrant intervention by U.S. authorities to examine the national security implications of such a transaction?

Indeed, Musk’s Twitter aspiration combined with his close China connection has attracted attention from no less than fellow billionaire and space exploration rival, Jeff Bezos of Amazon and Blue Origin. In an April 2022 tweet, Bezos asked, “Did the Chinese government just gain a bit of leverage over the town square?” Bezos also retweeted a message stating a few objective facts – that Tesla’s second biggest market after the U.S. in 2021 was China, and Chinese battery makers are major suppliers for Tesla. Since 2009 when China censored and banned Twitter, its government had almost no leverage over the platform, but that may be about to change.

A commentator for Nikkei Asia, putting it even more directly, wrote, “Beijing may feel that it is able to pressure Musk to take down content that it does not like, as the Chinese government has always done. If Musk refuses, Beijing could start squeezing Tesla’s operations in China.”

This is why it is misguided to simply focus on Musk’s comment on Taiwan. His disclosure about Chinese influence – at least the attempt of it, thereby revealing his own vulnerability – should be taken seriously, in light of not only his present control of the censorship-circumventing Starlink network, but even more importantly, his attempt to take over Twitter. The deal could potentially jeopardize the freedom of expression of all Twitter users by placing the world’s biggest open opinion platform under the indirect domination of the world’s biggest censor, China.

Disclaimer: The author is the owner of a 2020 Model 3 in Hong Kong that he does not drive anymore.