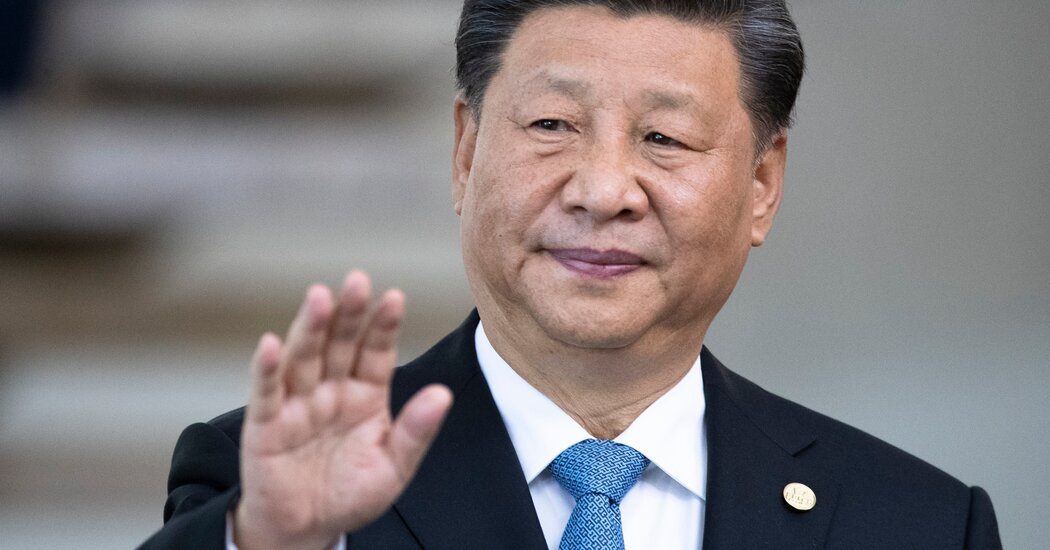 The DealBook newsletter delves into a single topic or theme every weekend, providing reporting and analysis that offer a better understanding of an important issue in business. If you don’t already receive the daily newsletter, sign up here.

At a Communist Party congress starting in Beijing on Oct. 16, Xi Jinping is expected to be named to a third five-year term as the country’s top leader, paving the way for him to consolidate power to an extent not seen in decades.

Under Mr. Xi, China has become the world’s dominant manufacturer of everything from cement to solar panels, as well as the main trading partner and dominant lender for most of the developing world. It has built the world’s largest navy, developed some of the world’s most advanced ballistic missiles and constructed air bases on artificial islands strewn across the South China Sea.

But China’s economy, the second largest, is now in a tailspin. Its property market, which over the last ten years contributed about a quarter of the country’s economic output, is melting down. Foreign investment has faltered. And widespread lockdowns and mass quarantines, part of China’s zero-tolerance approach to Covid-19, have hurt consumer demand and stalled businesses.

At the same time, Mr. Xi has worked to turn China into a more state-led society that often puts national security and ideology before economic growth. He has cracked down on Chinese companies and limited their executives’ power. Some of China’s best-known entrepreneurs have left the country and others, such as Alibaba co-founder Jack Ma, have largely disappeared from public view.

All of this has hurt China’s economy, which was just 0.4 percent larger from April through June than during the same period last year. The growth was far below the government’s initial target for growth of about 5.5 percent this year. For the first year since the 1990s, China’s economic growth is expected to fall below the rest of Asia’s.

Mr. Xi’s next moves could have huge consequences for the global economy. Multinational companies like General Motors and Apple have bet on China as a reliable place to mass-produce goods and as an ever-growing market. But rising tensions between mainland China and Taiwan, particularly after Russia’s invasion of Ukraine, have left big American and European companies scrambling to establish backup supply chains elsewhere.

At the same time, China’s imports of foreign goods have stumbled as Chinese consumers become even more cautious spenders and as the Chinese government subsidizes local companies to produce substitutes for imported products. The Shanghai stock market has dropped almost 17 percent so far this year.

The main task of China’s ruling elite at the party congress, a gathering that happens once every five years and typically lasts a week, will be to confirm the lineup of China’s leaders. But a keynote opening speech by Mr. Xi will also provide important clues for what the future holds for businesses in China and around the world.

Mr. Xi’s speech will be full of Communist Party ideological jargon and probably very long — his speech at the start of the last party congress, in 2017, lasted more than three hours. But buried in that jargon are likely to be some important messages. Here’s what finance leaders and corporate executives around the world want to know.

One of Mr. Xi’s favorite economic policy initiatives in recent months has a simple, innocuous-sounding name: “common prosperity.” The big question lies in what it means.

Common prosperity, a longtime goal of the Communist Party, has been defined by Mr. Xi as reining in private capital and narrowing China’s huge disparities in wealth. Regulators and tax investigators cracked down last year on tech giants and wealthy celebrities. Beijing demanded that tycoons give back to society. And Mr. Xi has strongly discouraged speculation in housing, pushing instead for government subsidies for the construction of more rental apartments.

A regulatory crackdown on tech companies and after-school education companies contributed to a wave of layoffs that left one in five young Chinese city dwellers unemployed by August. Lending limits on China’s highly inflated housing sector have triggered a nosedive in the number of fresh construction projects being started and a wave of insolvencies among real estate developers. Many Western hedge funds that bet heavily on the real estate developers’ overseas bond issues incurred considerable losses.

The term “common prosperity” was seldom used by top officials last spring during those setbacks. But Mr. Xi conspicuously revived it during a tour of northeastern China in mid-August. The Politburo subsequently mentioned common prosperity when it announced on Aug. 30 the starting date and agenda for the party congress.

Less clear is how Mr. Xi will define the term in his opening speech at the party congress. Possibilities include calling for everything from a more progressive tax system to further social spending programs to the deregulation of small businesses.

After Mr. Xi speaks on Oct. 16, “I think we will have a much better idea of whether it is more state-directed or more market-directed,” said Joe Mazur, a senior analyst at Trivium China, a Beijing consulting firm.

Mr. Xi’s mantra for foreign trade and industrial self-reliance, first put forward in May 2020, is a theory of what he calls “dual circulation.” The concept involves relying primarily on domestic demand and innovation to propel the Chinese economy, while maintaining foreign markets and investors as a backup engine for growth.

Mr. Xi has pushed ahead with lavish subsidies to develop Chinese manufacturers, especially of semiconductors. But the slogan has attracted considerable skepticism from foreign investors in China and from foreign governments. They worry that the policy is a recipe for replacing imports with Chinese-made goods.

China’s imports have indeed stagnated this year while its exports have soared, producing the largest trade surpluses the world has ever seen. Those surpluses, not domestic demand, have sustained China’s economic growth this year.

Chinese officials deny that they are trying to discourage imports, and contend that China remains eager to welcome foreign companies and products. When the Politburo scheduled the party congress for Oct. 16, it did not mention dual circulation, so the term might be left aside. If it goes unmentioned, that could be a conciliatory gesture as foreign investment in China is already weakening, mainly because of the country’s draconian pandemic policies.

China’s zero-tolerance approach to Covid-19 has prevented a lot of deaths and long-term infections, but at a high and growing cost to the economy. The question now lies in when Mr. Xi will shift to a less restrictive stance toward controlling the virus.

The United States has had over 800 times as many pandemic deaths per million residents as China, at least according to the two countries’ official statistics. But China has achieved its record through extensive lockdowns — including one that lasted two months last spring in Shanghai — and by almost completely sealing off the country to international travelers.

Foreign investment has stalled during the pandemic. Top executives have shifted their attention to other countries that they can more easily reconnoiter. Multinationals have had trouble obtaining government permission to send engineers to their operations in China, and sending dependents has been even harder.

China still lags in vaccinating citizens over 80 years old. Few people in China have developed resistance to the virus through prior exposure. So almost no one expects Mr. Xi to announce during the party congress a rapid retreat from the zero-Covid policy, although there could be hints of a gradual loosening.

Taiwan: What Comes Next

The biggest uncertainty about China for international businesses lies in whether it will pursue some kind of military action in the coming years against Taiwan. Global businesses already face billions of dollars in losses on operations in Russia that they must sell or liquidate following Russia’s invasion of Ukraine, which has triggered extensive sanctions by the world’s leading democracies.

Mr. Xi drew thunderous applause in 2021 in Tiananmen Square, on the 100th anniversary of the founding of the Chinese Communist Party, when he reiterated China’s claim to Taiwan, a self-ruled island democracy. President Biden has mentioned four times that the United States is prepared to help Taiwan resist aggression. Each time his aides have walked back his comments somewhat, however, emphasizing that the United States retains a policy of “strategic ambiguity” regarding its support for the island.

Even a vague mention by Mr. Xi at the party congress of a timeline for trying to bring Taiwan under the mainland’s political control could damage financial confidence in both Taiwan and the mainland.

The most important task of the ruling elite at the congress is to confirm the party’s leadership.

Particularly important to business is who in the lineup will become the new premier. The premier leads the cabinet but not the military, which is directly under Mr. Xi. The position oversees the finance ministry, commerce ministry and other government agencies that make many crucial decisions affecting banks, insurers and other businesses. Whoever is chosen will not be announced until a separate session of the National People’s Congress next March, but the day after the congress formally ends, members of the new Politburo Standing Committee — the highest body of political power in China — will walk on a stage in order of rank. The order in which the new leadership team walks may make clear who will become premier next year.

China’s constitution bars Li Keqiang, the premier for the past decade, from serving a third term in that office. Possible successors for Mr. Li include Wang Yang, the leader of the Communist Party’s top advisory body, and Hu Chunhua, one of four vice premiers of China.

Both men have coincidentally spent five-year terms leading Guangdong Province, a leading hub of entrepreneurship and foreign investment in China. Neither has given many clues about their economic thinking since taking posts in Beijing. Mr. Wang had more of a reputation for pursuing free-market policies while in Guangdong.

Mr. Hu is seen as having a stronger political base than Mr. Wang because he is still young enough, 59, to be a potential successor to Mr. Xi. That political strength could give him the clout to push back a little against Mr. Xi’s recent tendency to lean in favor of greater government and Communist Party control of the private sector.

Precisely because Mr. Hu is young enough to be a possible successor, however, many businesspeople and experts think Mr. Xi is more likely to choose Mr. Wang or a dark horse candidate who poses no potential political threat to him.

In any case, the power of the premier has diminished as Mr. Xi has created a series of Communist Party commissions to draft policies for ministries, including a commission that dictates many financial policies.

What do you think? Let us know: [email protected].