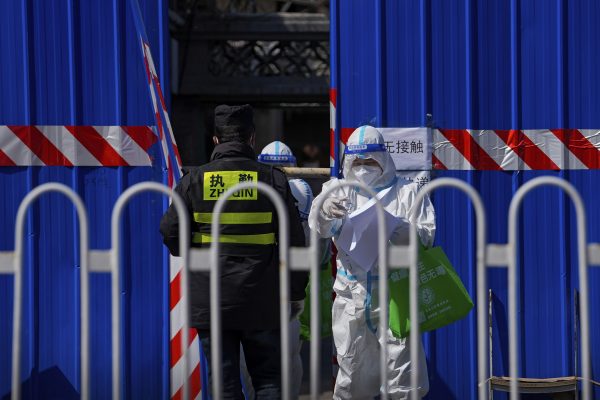 On September 7, three days before the national Mid-Autumn holiday weekend, my husband and I received separate phone calls from the pandemic prevention office in the Shanghai district where we live. We were informed that we had become sub-contacts to a recently confirmed COVID-19 case and were required to be taken to a centralized quarantine facility.

Having lived through the excruciating two-month lockdown of the city, we have adapted to the new post-lockdown reality: lining up for PCR tests every two or three days, scanning venue codes posted outside every public location to facilitate contact tracing, showing a green health code on our smartphones to gain access to restaurants and other services. But to be informed of an imminent quarantine was a first, and as U.S. citizens living in China, the uncertainties of what awaited us exacerbated our anxieties.

The Shanghai lockdown ushered in a new level of heavy-handedness in the Chinese Communist Party’s upkeep of “zero COVID.” Lockdowns continue to be imposed nationwide. The calamities we witnessed in Shanghai – people scrambling for supplies, denied access to medical treatment – have been repeated throughout the country.

On social media, netizens are pointing – subtly, so as to avoid censorship – to the party’s hypocrisy. On the one hand, pandemic control regulations urge local leaders to implement scientific measures and avoid causing unnecessary harm to citizens; on the other hand, those failing to maintain zero or near-zero case status within their jurisdictions face the possibility of demotions. The fear of punishment motivates local party chiefs to be overly strict; the harm it causes to civilians is a price they are all too willing to pay.


In Chengdu, authorities barred people from exiting shaky buildings amid an earthquake. In Lhasa, tourists were stranded on the Tibetan plateau until they were confirmed to be COVID-19-free. In Guiyang, residents starved for days on end as authorities restricted deliveries in large areas of the city. In all three cases, local officials have made ad hoc apologies for their mishandling of the situations, but mishandling continues.

My husband’s Chinese employer intervened on our behalf, negotiating for us to self-isolate at home. But just as we thought we were spared from the harshest treatment, our apartment building manager appeared at our door the next day with two bags of hazmat suits. She told us a van would pick us up at an unspecified time to quarantine in an unspecified location; when they arrived we were to put the suits on. It appeared that negotiations were off the table. My husband contacted his up-line manager, who assured him that we would not be taken anywhere.

The next day, the health code on our phones turned red.

Standardized throughout the country, the health code comes in three colors. Green is the color of acceptance; yellow or red would effectively limit a person’s freedom to access any public services even in case of emergency.

Arbitrary code assignment has been reported in multiple regions. In Minquan, a county with 700,000 residents in central Henan province, the anti-COVID-19 office decided to assign a yellow or red code not only to its entire population but also to anyone with a travel history to local coronavirus hotspots.

This kind of arbitrariness is not new in authoritarian China – growing up here, I experienced it firsthand – but the quest for “zero COVID” has amplified it. And there is no legal recourse for infringement upon individual rights when levied by the authorities itself.

Confined at home, I called the restaurant where we supposedly contracted risk of infection. A staffer picked up the phone, and like a wrongfully convicted victim who has found a jail mate, he told me the confirmed COVID-19 patient stopped at the restaurant on September 3 and placed an order to-go. The transaction happened at the entrance and lasted no more than a few minutes. The restaurant was contacted on the 7th like we were; all workers and customers who had been to the venue between September 3 and 6 were required to quarantine. Both the staffer and I remarked on the absurdity of the verdict, but there was nothing we could do.

The restaurant has a daily foot traffic in the hundreds, which implies that over a thousand people were confined inside quarantine hotels where they spent Mid-Autumn Day – a traditional holiday for family reunions – away from their families. My husband and I felt fortunate to stay home, but in some ways it was worse because our apartment had become a de facto prison. In late August, our residential compound had just undergone another 10-day shutdown after the two-month citywide lockdown in spring. The next seal-off could be anytime.

Among the Chinese public, a sentiment has been brewing that the 20th National Party Congress – scheduled to begin on October 16 – cannot come too soon. The hope is that after Xi Jinping extends his grip on power, the draconian measures can be relaxed. China’s early success in containing the coronavirus has become a major political asset for the country’s leader, who has proven willing to protect his legacy at all costs.

But as zero COVID drags on, the public is souring on its support for the initial policy. The narrative of sacrificing a small population for the sake of the entire country, which had been propagated in early stages of the pandemic, no longer resonates. The country has taken too big of a toll for one man’s political agenda.

“When will this end?” asked one commenter on social media in response to an overturned quarantine bus that caused 27 deaths over the weekend in Guizhou province. All 47 passengers on the bus were confirmed to be sub-contacts to COVID-19 patients; they were transported overnight and hundreds of kilometers away from home to quarantine centers. My husband and I could have been on that bus. Anyone could have been on that bus.

Online, these recent tragedies have evoked the term lianzuo, a system under which anyone slightly tied to a criminal is punishable. Codified in imperial China, the system bespeaks the misery of a people under the rule of a feudal despot, who wields his power to eliminate large family tribes and clans that have become perils to the throne.

The bad news is that despots only become more despotic. Regardless of the outcome of the political meetings this fall, Xi will continue to wreak havoc on the country. More criticisms, both international and domestic, will further alienate him from rational advice, as power breeds paranoia. As Xi continues to impose political control on the country and his growing number of enemies, a higher price will be paid – and it’s always the people who foot the bill.