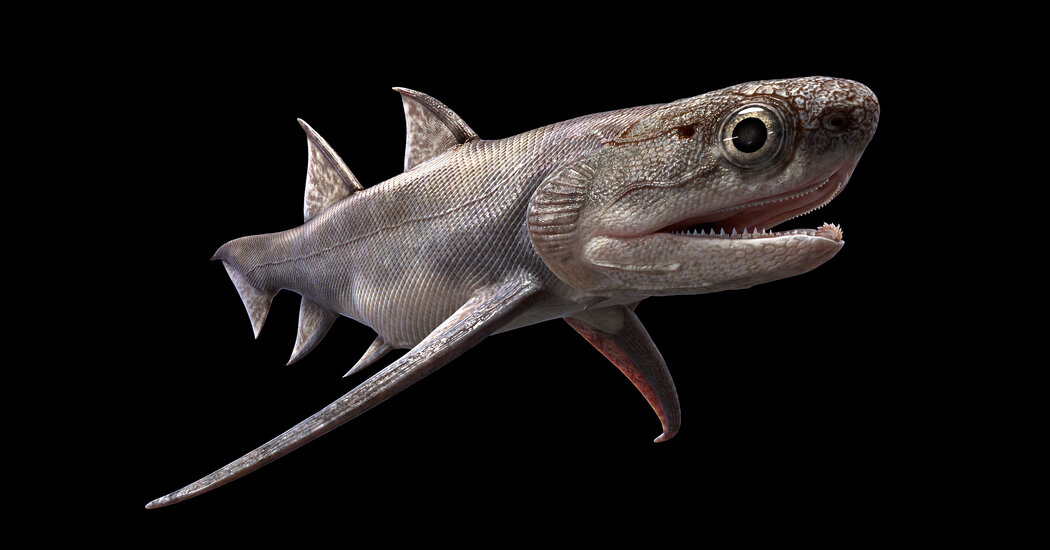 Mention the ocean, and it’s hard not to think of jaws. The deep waters contain many tooth-lined mouths: the bear-trap maws of sharks and dolphins, the slack lips of shoaling and reef fish, the baleen-filter gape of enormous whales. Jawed fish eventually crawled out of the seas millions of years ago and gave rise to the jawboning vertebrates we are today.

But when did such an evolutionary innovation arise? A pair of fossil beds discovered in Southern China suggest that the answer may lie tens of millions of years deeper into the past than previously thought. The findings — which include beautifully preserved new species of early fish, the oldest-known vertebrate teeth and a lot of fish with armor — were published Wednesday across four papers in Nature.

“This is a step change in where we’re thinking about these events in the chronology of vertebrate evolution,” said Matt Friedman, a paleontologist at the University of Michigan who was not involved in the research but wrote a perspective article that accompanied the Nature papers.

Jawed fish explode into the fossil record 419-359 million years ago during a period known as the age of fish, or the Devonian. Fish of this era all have “their identities clearly written on their bodies,” said Michael Coates, a paleobiologist at the University of Chicago who was not involved in the new papers. They include ancient groups like jawless fish, lineages of early jawed fish called placoderms, ascendant newcomers like cartilaginous and bony fish and the first fishes to hop onto land.

This sudden diversity of jawed fish — also called gnathostomes — has long led scientists to suspect that their origins must lie deeper in the fossil record, a period known as the Silurian, said Per Ahlberg, a paleontologist at Uppsala University in Sweden and an author on one of the papers. But until recently, the number of useful Silurian gnathostome fossils could be counted on one hand.

A decade ago, researchers set out to systematically survey the 425-million-year-old rocks of the late Silurian period in China, said Gai Zhikun, a paleontologist at the Chinese Academy of Sciences and an author on one of the papers. They were rewarded with complete fossils of early jawed fish.

Encouraged, they delved into older rocks. In 2020 these fishing expeditions got a bite: a pair of deposits outside of Chongqing.

The two fossil beds are separated by a few million years in time, each with a different complement of species.

The 436-million-year-old bed contains “little fishtank-sized fishes,” Dr. Ahlberg said, only a few centimeters long, which represent the oldest-known complete jawed fish. Most are of a flat, armored placoderm species named Xiushanosteus mirabilis, which most likely lived on the seafloor. Also present is Shenacanthus vermiformis, a cartilaginous fish related to sharks and rays, but with armor plates resembling those of unrelated placoderms — a find that suggests early sharklike species retained the armor-plates present in earlier branches of the fish family tree.

Philip Donoghue, a paleontologist at the University of Bristol and an author on one of the papers, says the most remarkable specimen from the site is a jawless fish called Tujiaaspis vividus. Thousands of head shields from the species’ family are known from the fossil record, but Tujiaaspis preserves the first known body. It comes with a surprise: a set of paired fins jutting out from the skull, which Dr. Donoghue and his colleagues suggest is a likely precursor of the pectoral and pelvic fins found in gnathostomes, which for fish that moved onto land gave rise to arms and legs. Previously, researchers believed the two sets of fins evolved separately between jawless and jawed fish.

The second site, at 439 million years old, preserved more important fossils. One paper describes a collection of spines, scales and head-plates from an animal named Fanjingshania renovata, all of them dead-ringers for later examples of cartilaginous fish. Another records a whirl of connected teeth — the oldest yet known from a vertebrate — from a fish named Qianodus duplicis. Both animals belong firmly to the branch of jawed fish called the chondrichthyans, the group of cartilaginous fish that include modern sharks, rays and ratfish. (Bony fish like salmon and humans are the other branch.)

The presence of shark relatives at the site suggests that the split between cartilaginous and bony fish had already occurred by the early Silurian, Dr. Friedman said. Taken together, both sites push the origin of vertebrate jaws and teeth back by almost 14 million years.

“It’s a big shift from the consensus chronology,” Dr. Friedman said, which will force a drastic reconsideration of early marine ecosystems.

Jawed fish now seem to have originated as early as the Great Ordovician Biodiversification, a period around 485 million to 445 million years ago when marine invertebrates ruled. The few known fish from that period are jawless and generally unprepossessing, Dr. Coates said. “They look like armor-plated tadpoles,” he said. “So the last thing you’d expect is for proto-sharks and proto-bony fish to be swanning around at the same time.”

As paleontologists continue to dig deeper into early Silurian rocks in China, they’ve uncovered even more fish species. When it comes to the earliest jawed fish, researchers may soon find that they’ll need a bigger boat.

“It’s highly likely that there will be more discoveries,” Dr. Ahlberg said. “It’s an overused phrase, but I mean it: This promises to completely revolutionize our understanding of the earliest phase of jawed vertebrate evolution.”