Rich and ecologically diverse, the waters around the Galápagos Islands have attracted local fishermen for centuries. Now, these waters face a much larger, more rapacious hunter: China.

The Galápagos are part of Ecuador. And yet each year growing numbers of Chinese commercial ships, thousands of miles from home, fish here, at times right on the edge of Ecuador’s  exclusive economic zone.

The Chinese ships since 2016 have operated off South America virtually all day, all year, moving with the seasons from the coasts of Ecuador to Peru …

… and eventually to Argentina, where they have fished for what amounts collectively to more than 16,000 days already this year.

The scale has raised alarms about the harm to the local economies and the environment, as well as the commercial sustainability of tuna, squid and other species.

Over the last two decades, China has built the world’s largest deep-water fishing fleet, by far, with nearly 3,000 ships. Having severely depleted stocks in its own coastal waters, China now fishes in any ocean in the world, and on a scale that dwarfs some countries’ entire fleets near their own waters.

The impact is increasingly being felt from the Indian Ocean to the South Pacific, from the coasts of Africa to those off South America — a manifestation on the high seas of China’s global economic might. 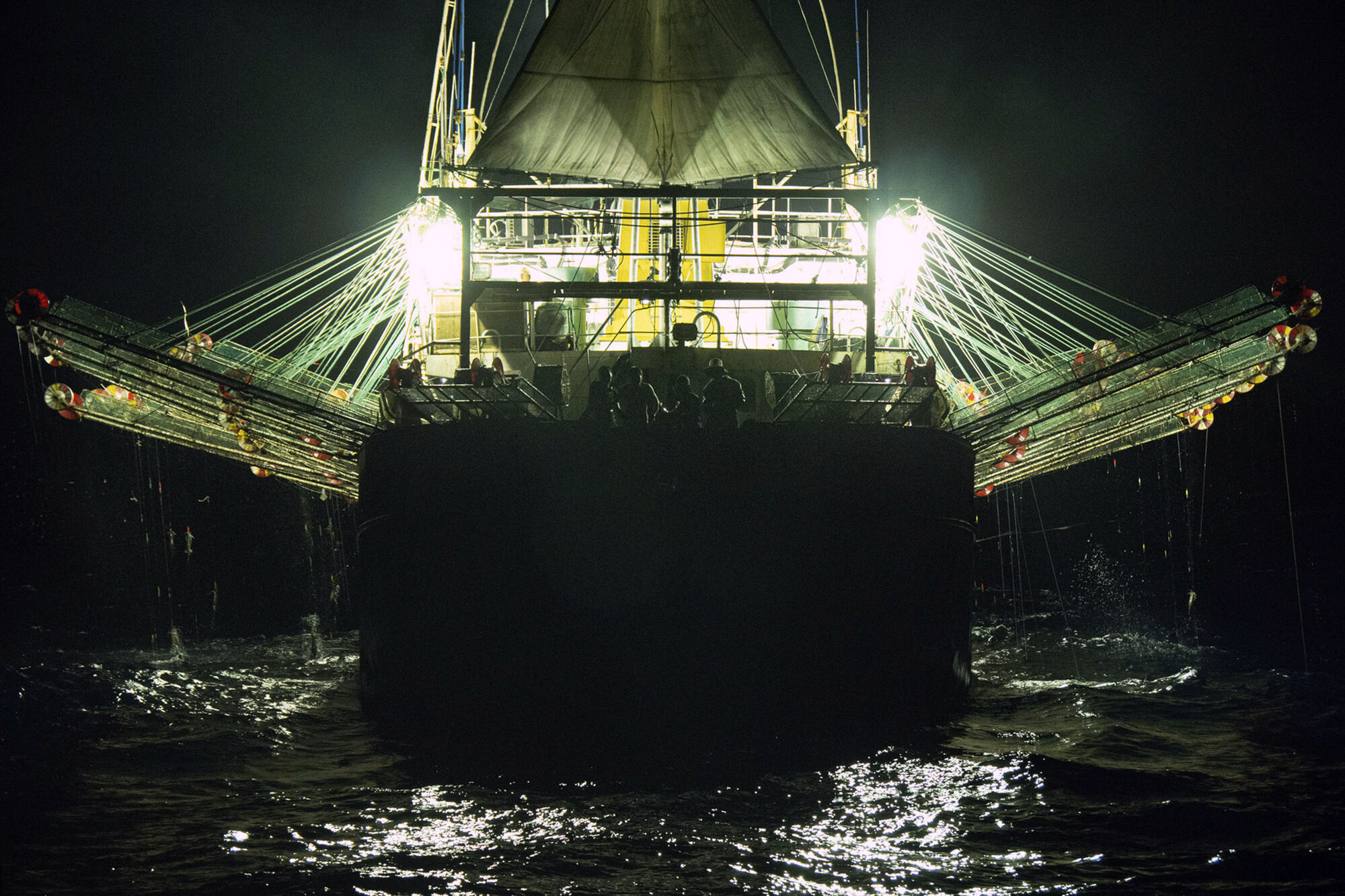 A Chinese ship fishing for squid off the west coast of South America in July 2021. Isaac Haslam/Sea Shepherd via Associated Press

The Chinese effort has prompted diplomatic and legal protests. The fleet has also been linked to illegal activity, including encroaching on other countries’ territorial waters, tolerating labor abuses and catching endangered species. In 2017, Ecuador seized a refrigerated cargo ship, the Fu Yuan Yu Leng 999, carrying an illicit cargo of 6,620 sharks, whose fins are a delicacy in China.

Much of what China does, however, is legal — or, on the open seas at least, largely unregulated. Given the growing demands of an increasingly prosperous consumer class in China, it is unlikely to end soon. That doesn’t mean it is sustainable.

In the summer of 2020, the conservation group Oceana counted nearly 300 Chinese ships operating near the Galápagos, just outside Ecuador’s exclusive economic zone, the 200 nautical miles off its territory where it maintains rights to natural resources under the Law of the Sea Treaty. The ships hugged the zone so tightly that satellite mapping of their positions traced the zone’s boundary.

Together, they accounted for nearly 99 percent of the fishing near the Galápagos. No other country came close.

Fishing near the Ecuador, Peru and Argentina exclusive economic zones

Note: “Other countries” are 35 entities including South Korea, Spain and Taiwan. Data is for the high seas within 50 nautical miles (about 57 miles) of the Ecuador, Peru and Argentina’s exclusive economic zones. Fishing activity near the disputed exclusive economic zone of the Falkland Islands was omitted. Data for 2022 is through May 31. By The New York Times

“Our sea can’t handle this pressure anymore,” said Alberto Andrade, a fisherman from the Galápagos. The presence of so many Chinese vessels, he added, has made it harder for local fishermen inside Ecuador’s territorial waters, a UNESCO World Heritage Site that inspired Charles Darwin’s theory of evolution.

Mr. Andrade has organized a group of fishermen, the Island Front for the Galápagos Marine Reserve, to call for the expansion of fishery protections around the islands.

“The industrial fleets are razing the stocks, and we are afraid that in the future there will be no more fishery,” he said. “Not even the pandemic stopped them.”

China can fish on such an industrial scale because of vessels like Hai Feng 718, a refrigerated cargo ship built in Japan in 1996. It is registered in Panama and managed by a company in Beijing called Zhongyu Global Seafood Corporation.

Its owner is a state-owned enterprise: the China National Fisheries Corporation.

Hai Feng 718 is known as a carrier vessel, or mothership. It has refrigerated storage holds to preserve tons of catch. It also carries fuel and other supplies for smaller ships that can unload their hauls and resupply their crews at sea. As a result, the other vessels do not need to spend time returning to port, allowing them to fish almost continuously.

Over the course of a year beginning June 2021, the Hai Feng 718 met at least 70 smaller Chinese-flagged fishing vessels in various locations at sea, according to Global Fishing Watch, a research organization that assembles location data from ship transponders. Each encounter, known as a transshipment, represents the transfer of tons of fish that the smaller ships would have had to unload in port hundreds of miles away.

Together the vessels followed the coasts of South America in what has become a year-round pursuit of catch.

After leaving Weihai, a port town in China’s Shandong Province, the Hai Feng 718 arrived in the Galápagos in August 2021 and spent nearly a month in the waters off Ecuador’s exclusive economic zone. There it serviced numerous ships like the Hebei 8588.

Such vessels are designed for catching squid, one of the prizes for the fleet. The lights the ships use at night to lure squid to the surface are so bright they can be tracked from space.

A month later, the Chinese fleet traveled to the coast of Peru, where the Hai Feng 718 sidled up to more than two dozen smaller vessels, some of them multiple times, including, again, the Hebei 8588.

Loaded with catch, the mothership returned to China. By last December, it was at sea again, this time heading west through the Indian Ocean. It arrived off the coast of Argentina for the start of the squid season there in January. In May, it was once again off the coast of the Galápagos.

Routes of vessels that encountered Hai Feng 718 in one year

Vessels that stayed near the coast of South America 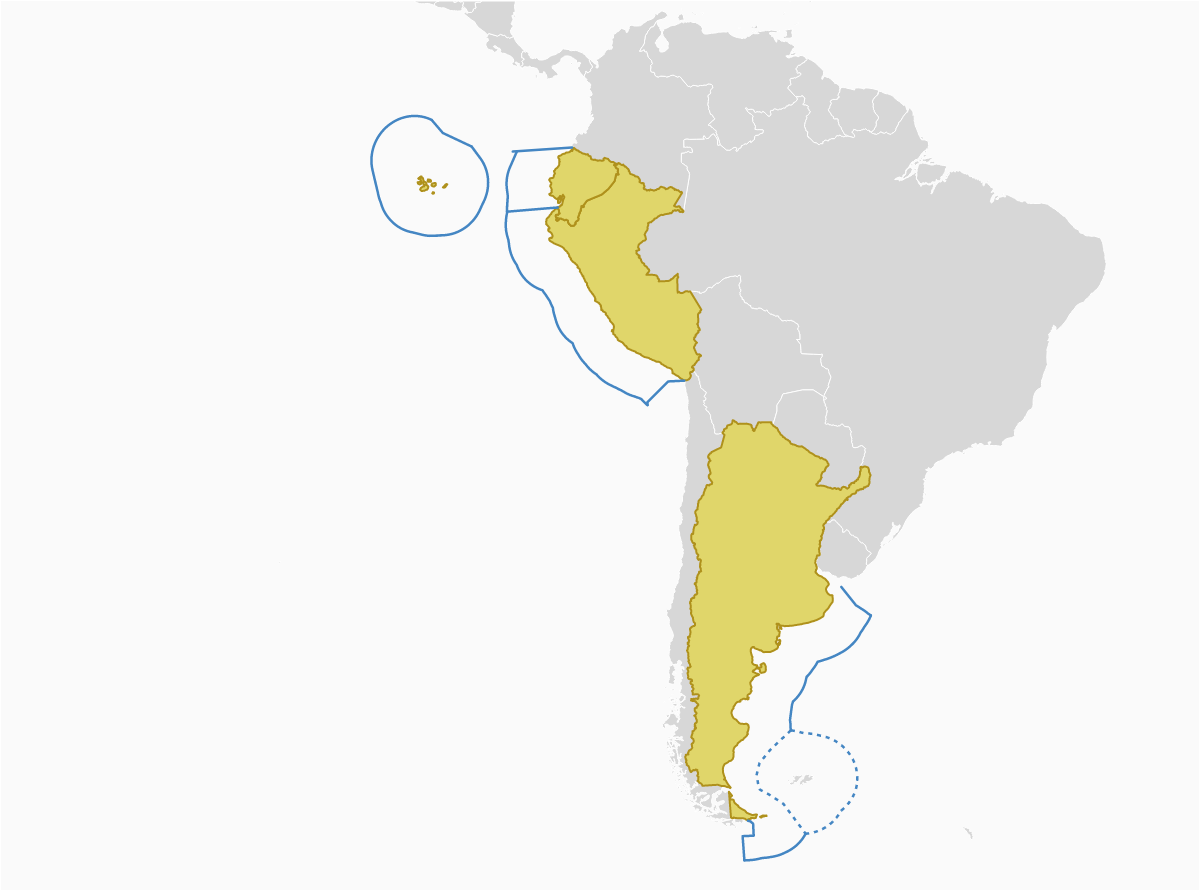 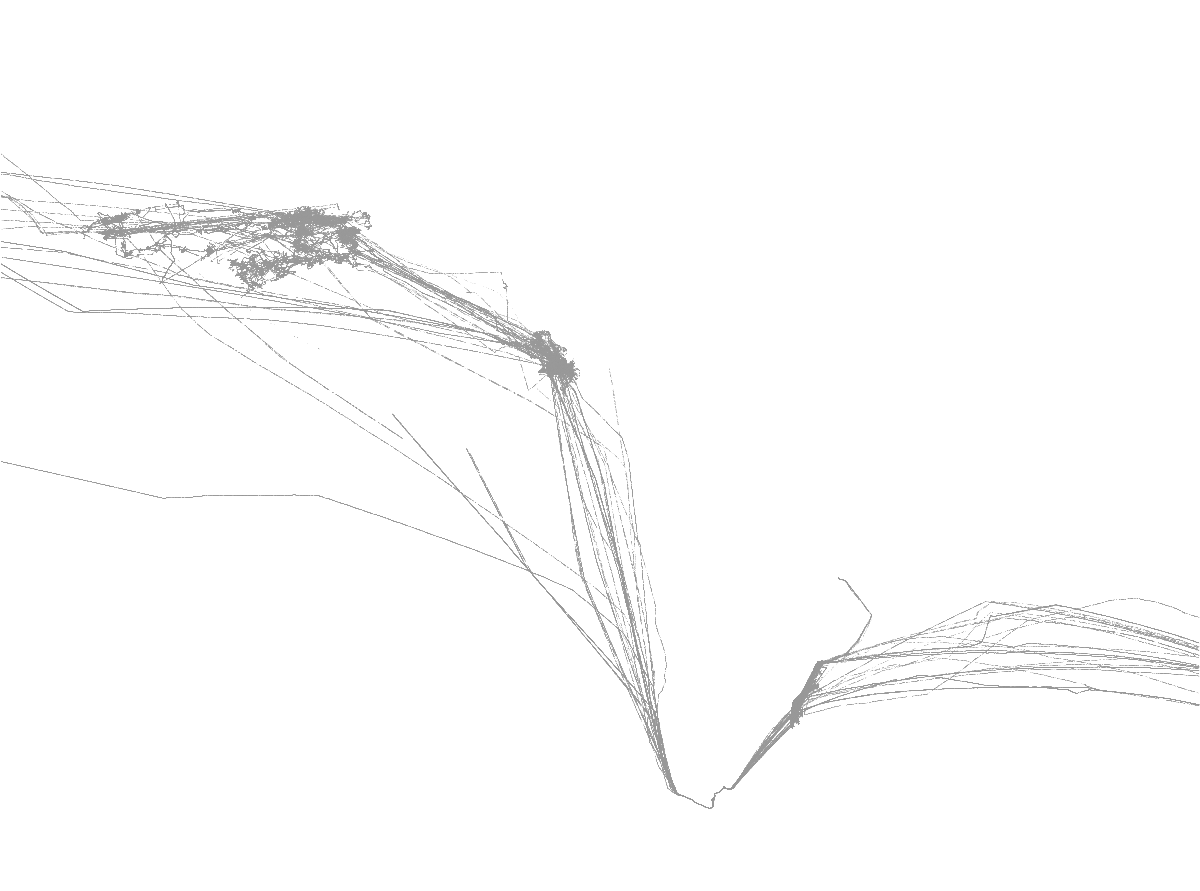 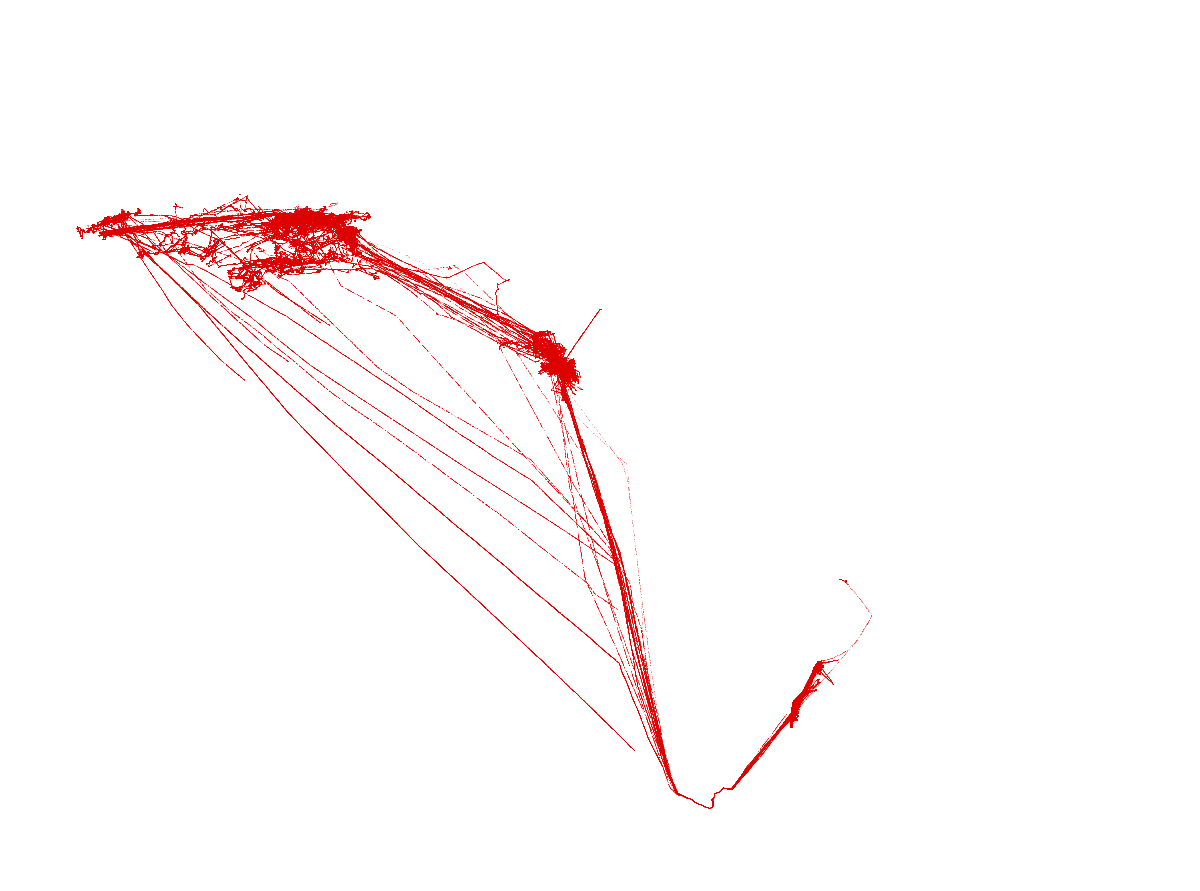 These operations have allowed a boom in the squid harvest. Between 1990 and 2019, the number of deep-water squid boats soared from six to 528, while the annual reported catch rose from about 5,000 tons to 278,000, according to a report this year by Global Fishing Watch. In 2019, China accounted for nearly all the squid boats operating in the South Pacific.

The arrangement of transferring catch to another vessel is not illegal, but according to experts, the use of the motherships makes it easy to underreport the catch and disguise its origins. Other places also deploy deep-water fleets, including Japan, South Korea and Taiwan, but none do so on the scale of China.

The Hai Feng 718 alone has more than 500,000 cubic feet of cargo space, enough to carry thousands of tons of fish.

Parked side by side, carrier vessels exchange fuel, crew supplies and the catch from fishing vessels. This allows fishing ships to fish for longer periods. 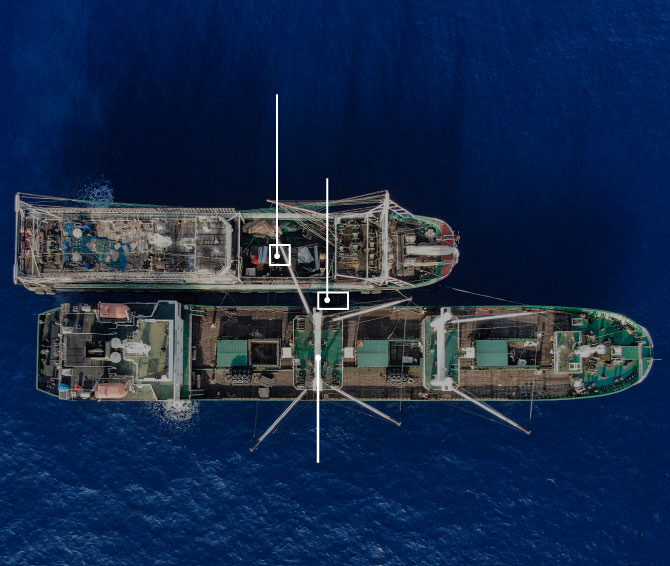 Fender to maintain a safe

Crane to transport catch from 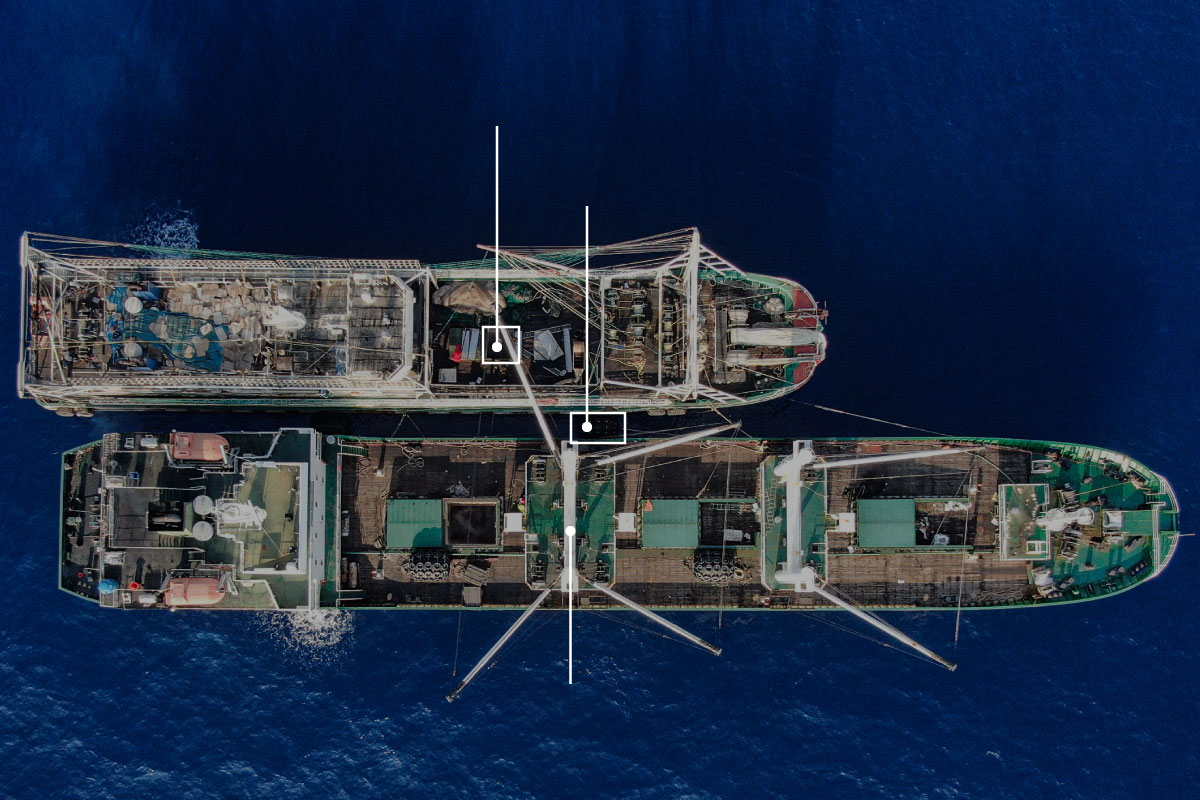 Fender to maintain a safe

Crane to transport catch from

Transshipment between a squid fishing vessel and a cargo carrier in the North Indian Ocean last year. Source: Food and Agriculture Organization of the United Nations By The New York Times; Photograph by Fernanda Ligabue/Greenpeace

Global Fishing Watch has tracked scores of unexplained “loitering events,” where larger ships linger in one area without any recorded meetings between the carriers and smaller ships. Experts warn that the smaller ships may be turning off their transponders to avoid detection to disguise illegal or unregulated catch.

The impact on certain species like squid off the coast of South America is difficult to measure exactly. In some regions, like the South Pacific, international agreements require countries to report their haul, though underreporting is believed to be common. In the South Atlantic, there is no such agreement.

There are already worrisome signs of diminishing stocks, which could foreshadow a broader ecological collapse.

“The concern is the sheer number of ships and the lack of accountability, to know how much is being fished out and where it’s going to,” said Marla Valentine, an oceanographer with Oceana, the conservation group. “And I’m worried that the impacts that are happening now are going to cascade into the future.

“Because it’s not just the squid that are going to be affected,” she added. “It’s going to be everything that feeds on the squid, too.”

The appearance of the Chinese fleet on the edge of the Galápagos in 2020 focused international attention on the industrial scale of China’s fishing fleet. Ecuador lodged a protest in Beijing. Its president at the time, Lenín Moreno, vowed on Twitter to defend the marine sanctuary, which he called “a seedbed of life for the entire planet.”

China has responded with offers of concessions. It announced moratoriums on fishing in certain areas, though critics noted that the restrictions apply to seasons when the fish are not as abundant. It vowed to cap the size of its deep-water fleet, though not to reduce it, and to trim the government subsidies it provides fishing companies, many still state-owned or controlled.

In the year that followed the furor over the Galápagos, the bulk of the Chinese fleet kept a greater distance from Ecuador’s exclusive economic zone. Otherwise it continued to fish as much as before. 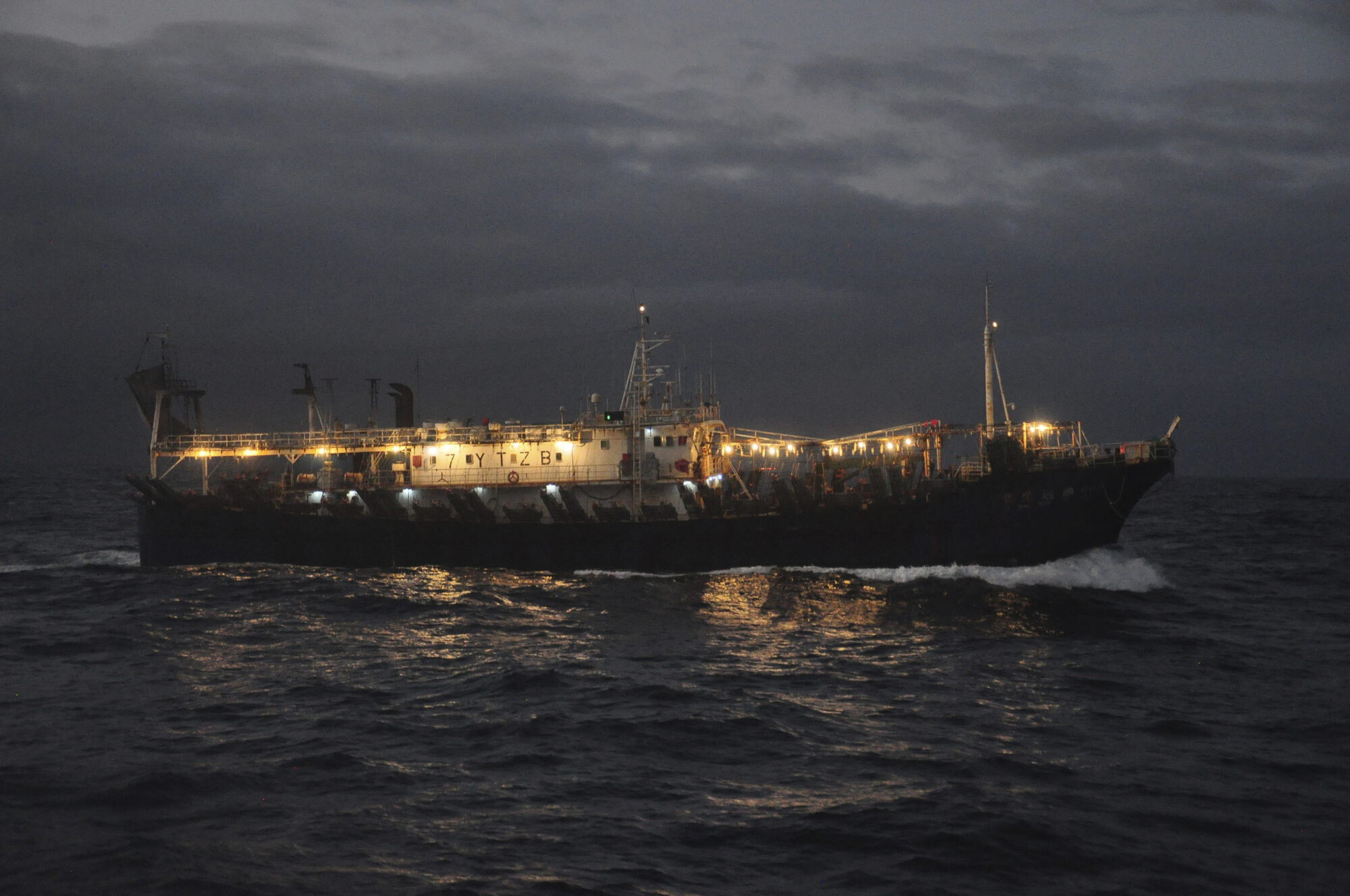 In Argentina, a group of environmentalists, supported by the Gallifrey Foundation, an ocean conservation organization, filed an injunction with the country’s top court last year in the hope of prodding the government to do more to comply with its constitutional obligations to protect the environment. They plan to submit a similar injunction in the coming months in Ecuador.

“We have a permanent Chinese fleet 200 miles off our coast,” said Pablo Ferrara, a lawyer and professor at the University of Salvador in Buenos Aires, referring to the distance covered by Argentina’s exclusive economic zone.

Argentina’s navy, which sank a Chinese fishing boat inside the zone in 2016, has since announced it would add four new patrol ships to step up its enforcement efforts in its coastal waters.

The United States, too, has pledged to assist smaller nations to counter China’s illegal or unregulated fishing practices. The U.S. Coast Guard, which now calls the practice one of the greatest security threats in the oceans, has dispatched patrol ships to the South Pacific.

In July, President Biden issued a national security memorandum pledging to increase monitoring of the industry. Speaking virtually at a forum of Pacific nations that month, Vice President Kamala Harris said the United States would triple American assistance to help the nations patrol their waters, offering $60 million a year for the next decade.

Such efforts may help in territorial waters, but they do little to restrict China’s fleet on the open seas. The consumption of fish worldwide continues to rise, reaching a record high in 2019. At the same time, the known stocks of most species of fish continue to decline, according to the latest report by the United Nations Food and Agriculture Organization.

“The challenge is to persuade China that it, too, has a need to ensure the long-range sustainability of the ocean’s resources,” said Duncan Currie, an international environmental lawyer who advises the Deep Sea Conservation Coalition. “It’s not going to be there forever.”