Since the beginning of the war in Ukraine, China has been careful to officially maintain its “pro-Russian neutrality.” Nevertheless, Beijing’s propaganda machine is hard at work amplifying Russian narratives in line with its recent “friendship without limits.” Beijing has refused to impose any sanctions on Moscow and, following an initial adjustment period marked by economic disengagement, has not restrained from deepening economic ties with Russia. At the same time, China is aiming to minimize its exposure to OECD sanctions and is demanding high export prices of its northern neighbor, especially for products of strategic importance such as semiconductors.

Chinese imports from Russia – almost entirely made up of commodities – experienced a brief dip after February 24 but then bounced back, first because of the price-hike sparked by the war and then growth in import volumes, in strong contrast to sharply falling G-7 imports. The fears of sanctions that first limited import volumes – especially of oil, backed as it is by large financial deals potentially at risk of secondary sanctions – have apparently faded.

Low Russian oil and gas prices have played a role in attracting further purchases from China, now overtaking Germany as single largest buyer of Russian energy; other large emerging economies are catching up fast. Compared to a booming April-May, import volumes in June slowed somewhat; this may be due to sluggish demand from a slowing Chinese economy and some constraints on production and delivery as sanctions bite.


Chinese exports to Russia plummeted following the outbreak of war, but have since rebounded. In contrast to EU and U.S. exports, this initial slowdown was most likely due to the weakness of the Russian economy. China nevertheless outperformed all non-OECD G-20 peers, including Brazil and India, although Turkey is suspected of circumventing the sanctions. Only chemicals, plastics, and semiconductor exports bucked the downward trend. China has, however, been selective in meeting Russia’s tech needs to avoid being hit by OECD sanctions. 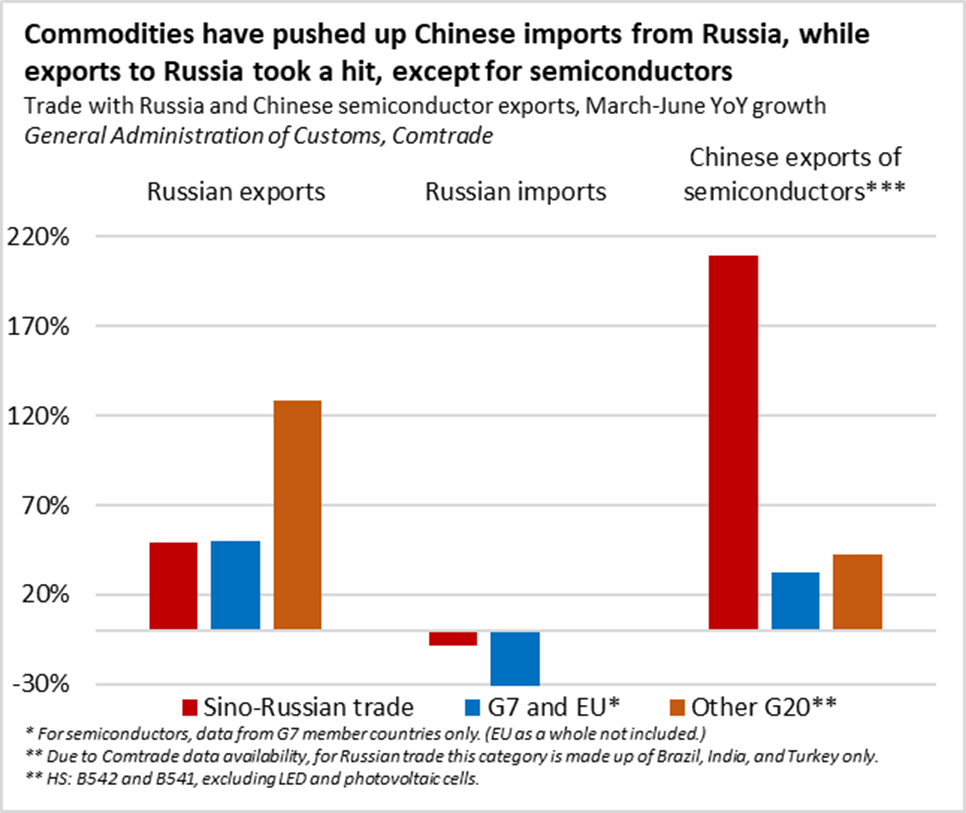 Semiconductors are a good illustration of what happens when high Russian demand meets Chinese capacity and legal confidence regarding sanctions. After a brief decline, Chinese deliveries of integrated circuits and other semiconductor products have skyrocketed since April, when China stepped in to fill the gap left by a 90 percent drop in global exports to Russia, likely reassured by increased clarity on the G-7 sanctions. Export values have experienced staggering growth, partially reflective of the low base point prior to the war. The fact that this has not been fully mirrored in export volumes probably reflects the export of more advanced products by China to compensate for the withdrawal of OECD countries, as well as Chinese producers leveraging more market power and increasing prices as a result. General inflation and price increases in the semiconductor market have also played a role.

After Russian calls for Chinese chips for bank cards linked to the Mir payment system in early April were met with some initial hesitation, China repeatedly underlined its strong support for the Russian Federation. While those Chinese chipmakers – such as SMIC – that are directly reliant on U.S. and EU equipment have been reluctant to engage, firms that repackage chips and are not exposed to the U.S. and EU markets have taken up the slack. Russian motherboard manufacturers have modified their products to accommodate Chinese-made chips (which are still manufactured with Taiwan Semiconductor Manufacturing Company equipment). While slower and more power-intensive than their Intel and AMD counterparts, these chips are sufficient for basic web browsing and office work.

Caution Among Chinese Companies and Investors; Increased Trade in RMB

While China started out selling dual-use drones to Ukraine, the country’s most important drone maker, DJI, later decided to suspend operations in both Ukraine and Russia as a result of fears its products were being customized for military use. Rideshare company DiDi also announced its planned withdrawal from Russia for business reasons just prior to the outbreak of the war, but was forced to backtrack due to public blowback in China.

In general, however, Chinese tech firms have listened to market forces while not disengaging from Russia completely. Huawei, for example, while continuing to serve Russia, has closed four of its 19 official outlets in Russian cities. While very few Chinese tech companies have left the Russian market entirely in the way of their Western counterparts, trade here also seems to be driven by economic considerations, with Russian consumers’ dwindling purchasing power putting a damper on sales.

On the financial side, for which current data is thinner, indications point to restraint on the part of Chinese investors. It is worth noting that massive inflows of hard currency from Europe for oil and gas have more than fulfilled Russia’s external financial needs for now, with a current account surplus on track to surpass 10 percent of GDP. Granular information on infrastructure projects and financing suggests that they have been completely suspended, and there has been no indication of extra bank lending from China. Numerous Chinese financial service providers have announced their retreat from the Russian market amid high legal and economic uncertainties, and Chinese financial services have not seen widespread use in Russia despite endorsement from Moscow.

Trade in renminbi and rubles has increased significantly in the Russian capital, likely reflecting a switch away from the G-7 currencies. Despite some anecdotal occurrences and reported interest from a number of countries, there has been no indication of the broader use of the RMB internationally in other FX markets or in international payment systems.

Closer to Russia, Further From the International Community

China-Russia relations have traditionally been characterized by competition, but with China’s rise in world politics and now Russia’s war on Ukraine, they have become bound by a common enemy: the U.S. and NATO. Despite Russian frustration at China’s prioritization of its economic interests, Beijing has intensified its efforts to deepen bilateral exchanges since the war began. Chinese and Russian officials have not shied away from exchanges; there have been multiple telephone conversations between Presidents Xi Jinping and Vladimir Putin, and the mid-June meeting of Russia’s main economic forum witnessed a strong call for economic cooperation. New cooperation agreements have been signed on key industries including energy, space, and agri-food. At the BRICS summit in June, Xi proposed specific cooperation on cross-border payments and industrial value chains while fiercely criticizing sanctions as the cause of most of the world’s current disruptions, closely aligning with Putin’s talking points.

In the meantime, Beijing has not made any significant contribution to taming the gloomy humanitarian impacts of the war, including on international food and commodity markets. China is thought to be the largest holder of reserves for most agricultural products and commodities but has nevertheless avoided any proactive contribution to limiting commodity purchase prices or to facilitating food exports. What is worse, China has neither alleviated its stealth export restriction on fertilizer nor expanded its export quotas for refined oil, in spite of having the world’s largest capacities in both industries. Even when it comes to refugees, it is hard to identify a substantial contribution by China.

While neither its government nor its companies have given all-out support to the Russian economy, China has not restrained itself from providing vital economic and diplomatic support to a rogue state, bluntly challenging the fundamental interests of the EU. It is hard to conceive of a better wake-up call for Europe to accelerate its efforts to develop as a geopolitical actor and reduce its economic reliance on autocratic states.