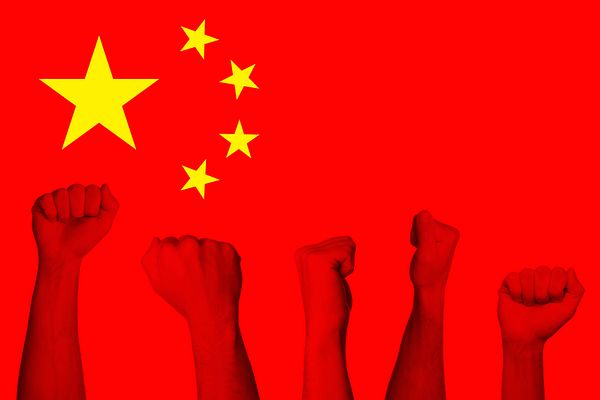 As the overturning of Roe v. Wade sparks outrage in the United States, on the other side of the world, feminism has become one of the most provocative topics in Chinese social discourse. Multiple tragedies in 2022 – from the chained woman in Xuzhou who suffered human trafficking and rape to young women in Tangshan being violently assaulted, and rumored killed, by thugs who sexually harassed them – trended as hot topics on Chinese social media. However, these discussions inevitably spiraled into gender conflicts. Behind the nasty words and rampant cyberbullying, one can find the invisible hand of the Chinese government.

The Chinese Communist Party (CCP) claims gender equality as one of its most outstanding achievements; Mao Zedong famously declared that “women can hold up half of the sky.” The CCP abolished cruel traditions such as foot-binding and granted women equal rights as citizens and “the owner of the new society.” For Mao, women, who were oppressed by “feudal Confucian rules,” were the natural allies and audience of his revolution.

However, as the CCP rules through a highly patriarchal political system, feminism gradually became an alternative source of mobilization that threatened the party’s rule. Feminism has the potential to become the CCP’s worst nightmare: a social movement that transforms Chinese social and political structure in the long run.

Emerging from a widespread social movement with a popular message, the CCP shares key ingredients of its own path to power with Chinese feminism. First, feminism has a wide audience. Unlike the democratic movement in China, which is centered around prominent figures in exile and viewed as “distant” and “foreign” by the public, feminism addresses the urgent needs of China’s women, ranging from employment discrimination to sexual harassment. Thus, it can naturally find a large audience who face similar problems.


Second, Chinese women’s rights activists effectively organized themselves into a transnational community with their own social media, encrypted messaging platforms, and legal groups. For example, distinguished women lawyers in China formed the Public Interest Collaborative Networks for Women Lawyers, a legal alliance that specializes in women’s rights cases such as sexual assaults and gender discrimination. This structure helps feminists escape regular government suppression and work within the system to raise awareness.

Facing tight control, Chinese feminists have developed a strategy to circumvent government pressure. They focus on social equality rather than political dissidence to avoid irritating the party. The CCP cannot openly assault gender equality movements lest it tarnish its founding myth.

In 2012, a group of feminists, including the Feminist Five who would famously be arrested later by the state, took over a men’s public restroom in downtown Guangzhou and invited women into the vacated stalls to shorten their long wait and raise awareness of the lack of public restrooms for women. In addition, they protested domestic violence and college entrance discrimination against female students (or “affirmative action” as the government called it) through public performance art.

However, as the feminist group formed a network with other human rights activists and started playing a role in organizing strikes, the CCP began to find the movement threatening to its monopoly on mobilization. On March 6, 2015, Chinese police arrested five prominent feminist protesters days before International Women’s Day and Xi’s UN speech on women’s rights. After more than a month of illegal arrest and torture, the government released the “Feminist Five” due to international pressure. After the Feminist Five crackdown, the feminist movement largely ceased street protests and switched to online discussions using Chinese social media platforms.

However, by focusing exclusively on gender inequality, the movement aggravated many men in society as they felt targeted. Zheng Churan, the organizer of “Occupy Men’s Toilet,” said that although she received overwhelming support from both men and women, a small fraction of men “felt scared” and “could not understand.” During online discussions on sexual assault and gender-targeted violence, a majority of both men and women condemned the violence, but some men felt uneasy about the rhetoric of framing all men as suspects.

It is important to note that this phenomenon is not exclusively Chinese; in the United States, where feminism has a long development history, gender inequality issues ranging from WNBA players’ pursuit of equal pay to the confirmation hearing of Supreme Court Justice Brett Kavanaugh could spark intense gender-based conflicts online.

Knowing that openly suppressing feminist discussions online might spark unrest and undermine its founding myth, the CCP adopts an indirect suppression strategy. The party effectively exploits the looming gender tensions to delegitimize feminism. It actively stigmatizes the movement by appealing to nationalism and labeling feminism as “extreme.” The All-China Women’s Association warned that “hostile Western forces” are using feminism as an “ideological weapon” to create social cleavage and undermine the Chinese political system.

In another case, the Communist Party Youth League published a Weibo post to celebrate the contribution of young people in CCP history. Many women commented questioning the failure to acknowledge women’s role in this post. In response, the Youth League harshly criticized “extreme feminism” as an “internet cancer” that causes “public anger.” Another article declared feminist organizations as “cults“ and warned against their alleged connection with U.S. NGOs, suggesting they are tools of Western infiltration and subversion.

The goal of this stigmatization is to delegate the task of online suppression to men and other anti-feminists. The government intentionally allowed, and even encouraged, cyberbullying against feminist online users to silence them. Many anti-feminists, some of them sponsored by the government and known as the “50-cent Party,” use nasty words, threats, and even “human-flesh search (人肉搜索),” which exposes others’ private information such as addresses and ID information, to attack feminists.

For example, Li Yuan, a former editor of the Wall Street Journal Chinese language website, constantly faced verbal assaults including attacking her for being too opinionated and single. In the nastiest case, many bullies even wished she would be gang-raped after she posted photos of her trips to India.

Furthermore, an anti-feminist even used a human-flesh search to expose another feminist’s parents’ address on Weibo and sent threats to her parents. His post was applauded by others who called him a role model. These cyberbullying activities targeting feminists aim to sideline their opinions and squash feminism through fear. Their ultimate goal is to force feminist voices off the internet through constant threats and verbal assaults.

Feminists in China are facing a dilemma: collective social actions result in government crackdowns, while online discussions on gender issues result in increasing gender cleavage, which leads to threats and cyberbullying. This dilemma reflects a painful reality — feminists are still a minority in Chinese society; most supporters are young, urban, and middle- or working-class women. Even many older women, who are more conservative, view feminism as deviant from traditional culture.

To break this dilemma, feminists must shift the discussion away from the government-sponsored gender conflict to win broader social support. Feminist Chinese men can help by shaping the public discourse on how feminism could benefit Chinese men while feminist Chinese women continue their fight against the oppressive regime.

The U.S. Supreme Court’s decision to walk-back women’s rights by overturning Roe v. Wade could further complicate the cause of feminism in China. While it could aid in pushing back on the narrative of feminism as a tool of Western influence, the restriction of women’s rights in the United States does little to encourage other countries to improve their own human rights records. The Chinese government indeed used this opportunity to highlight “human right abuses” in the United States to offset criticism of its own human rights records. It also highlights the danger that rights that are given can also be stripped away again.

The feminist movement in China thus has to not only improve gender equity but also sustain it. Countering the negative labeling from social media and the state, finding ways to situate the importance of gender equity within the Chinese political system and traditions, broadening the movement beyond the gender binary, promoting the representation of women in the CCP, and other strategies could expand the base of support and improve the longevity of the cause.  After all, women can best hold up half the sky when they have equal rights to men.