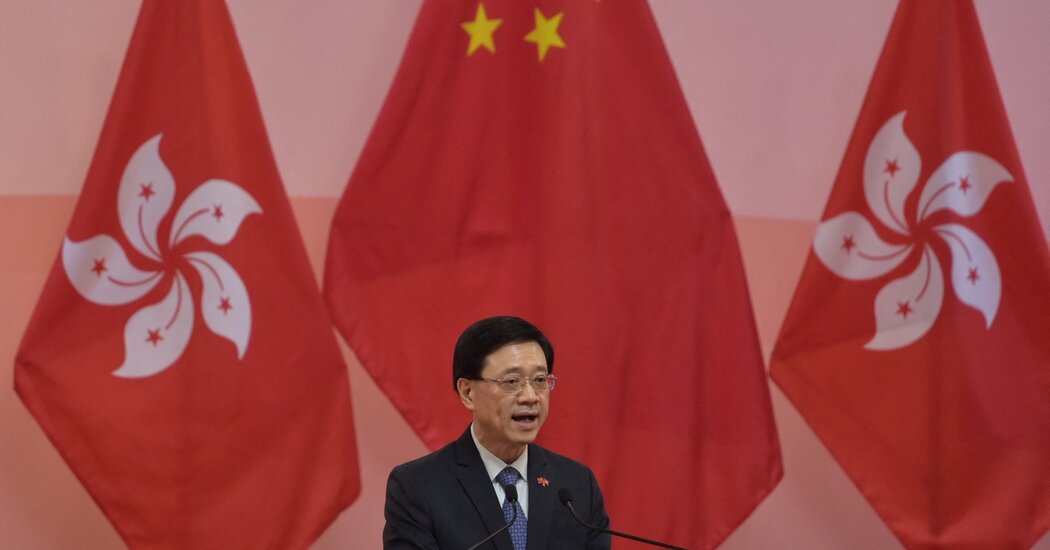 HONG KONG — John Lee rose through the ranks of Hong Kong’s security services, earning a reputation as a hard-liner by crushing the city’s 2019 protest movement and curbing dissent as the city’s No. 2 official.

Now, he is widely expected to be Beijing’s choice to take over as Hong Kong’s leader, an appointment that would reflect the central government’s emphasis on reinforcing its grip on the once-restive city, even at the expense of its status as a global financial center.

Mr. Lee said Wednesday he had submitted his resignation as Hong Kong’s chief secretary and that he planned to run for chief executive if Beijing accepted his notice.

“It signifies he is confident that he can get the support of Beijing, otherwise you would not take the risk of resigning from your post,” said Lau Siu-kai, an adviser to Beijing on Hong Kong affairs.

Carrie Lam, Hong Kong’s chief executive since 2017, opened the door for Mr. Lee to run when she said on Monday that she was stepping down after a single term plagued by vast antigovernment protests and a Covid outbreak this year with one of the world’s highest death rates.

If Mr. Lee were to move into the top job, he would bring to it a set of skills and experiences sharply different than those of his predecessor, reflecting just how much China’s priorities for Hong Kong have shifted.

There, he became the security secretary, and then led the government’s campaign to suppress the widespread protests in 2019 against a proposal to allow extraditions to mainland China, which soon expanded into a broader antigovernment movement.

Last year, when the police arrested dozens of pro-democracy activists and politicians because of their efforts to choose candidates to run in the city’s legislative elections, Mr. Lee defended the move, saying their plans to paralyze Hong Kong’s government once in office would lead the city into a “bottomless abyss.” Many of those arrested remain in custody awaiting trial for charges of subversion under a tough national security law Beijing imposed in 2020.

Mr. Lee was one of several senior Hong Kong and Chinese officials the United States imposed sanctions on in 2020 for their roles in cracking down on dissent in the city.

Political analysts say Mr. Lee’s ascension to chief executive would show that Beijing still has deep concerns about Hong Kong’s political stability, even after a sweeping crackdown has left much of Hong Kong’s once vocal pro-democracy camp either in prison or exile.

“It is not surprising for a security official to very likely take over the chief executive position in Hong Kong,” he added. “It conforms with the trend of securitization in mainland China in the past 10 years, especially after Xi Jinping came to power.”

Hong Kong’s leader is voted on by a committee of 1,500 people loyal to the central government. The system has always chosen Beijing’s preferred candidate, but it was tightened further last year to eliminate the remote possibility that a candidate favorable to the city’s opposition camp could be nominated.

One of the restrictions put in place was a system of extensive vetting of candidates for chief executive and the city’s legislative council. As chief secretary, Mr. Lee led that vetting committee, an indication of Beijing’s trust in him.

The lead-up to the selection of a new chief executive has been muted this year, with serious candidates emerging only one month before the May 8 poll. The decision had been scheduled for March, but was postponed as a coronavirus outbreak surged in February.

Marriages and divorces. Faced with a soaring divorce rate, China introduced a rule forcing married couples to undergo a 30-day “cooling off” period before formally parting ways. The move seems to have been effective at reducing divorces, but is unlikely to help with a demographic crisis fueled by a decline in marriages.

The relative quietness of the process reflects Beijing’s goal of avoiding political division within the establishment camp, Mr. Lau said. “Hong Kong cannot afford to have this kind of division, particularly in view of Covid-19,” he said.

Since Hong Kong returned to Chinese control in 1997, its four top leaders have come from either the business world or the city’s civil service. None has served a full two terms as allowed by law, and their tenures have often been marred by unpopularity and ineffectiveness.

“We have had one businessman, one professional and two civil servants serving as chief executive,” said Ronny Tong, a former lawmaker who now serves in the cabinet of Hong Kong’s chief executive. “It doesn’t seem any of them were truly up to the task. So for Beijing to say, perhaps let’s try another angle, I think it is understandable.”

Hong Kong’s system has frequently been criticized for selecting loyalists with limited political skills who often appear more beholden to the central government than the populace at large. While Mr. Lee would come into the job with a different background, critics say he would have similar shortcomings.

“The Communist Party does not pick leaders for Hong Kong with political skills,” said John P. Burns, an emeritus professor at the University of Hong Kong. “John Lee fits right into this.”

Because Mr. Lee does not have the same networks of contacts through Hong Kong’s business world and bureaucracy that his predecessors did, he would probably be more dependent on Beijing’s office in Hong Kong, the Central Liaison Office, for guidance, Mr. Burns said.

“Paul represents putting economy in the forefront,” Mr. Tong said. “John is really more of a security man, and therefore he is more at ease with trying to keep Hong Kong stable and a safe political environment. The choice of the two would suggest in terms of the list of priorities what Beijing is thinking.”

But Mr. Chan appeared to discount that possibility on Wednesday when he wished Mr. Lee luck in the selection contest, which was seen as a sign that he would not participate.