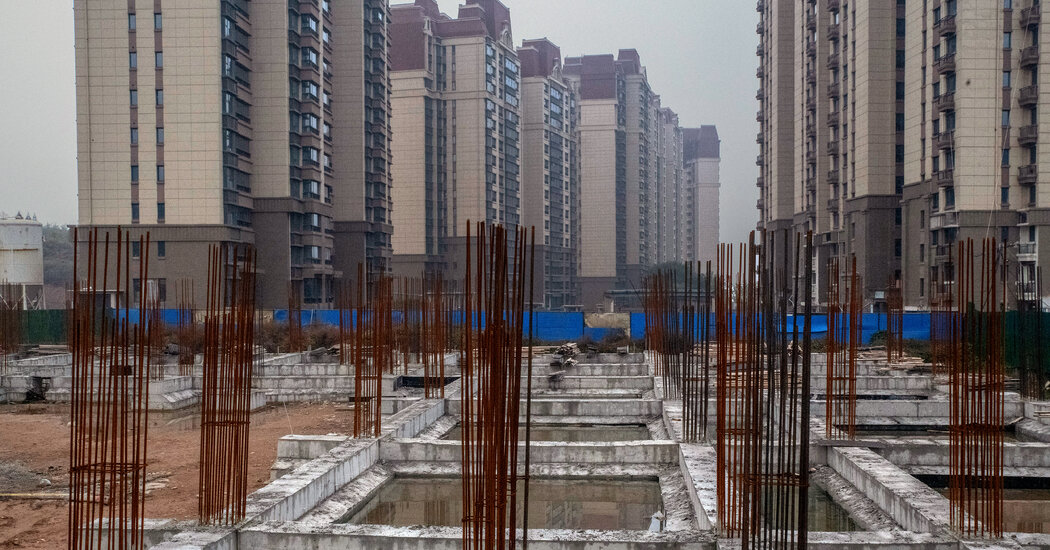 When times were flush for the property developer China Fortune Land, it bought a trophy soccer club and recruited star athletes from Argentina. These days, the players with the club, Hebei F.C., are on indefinite leave because it can’t afford to keep the lights on.

The developer is one of a growing number facing financial strain in China, challenging the narrative from Beijing that it can keep the country’s corporate debt crisis under control while avoiding the disorderly collapse of its property giants.

Global markets just weeks ago were fretting over the possible failure of China Evergrande Group, the world’s most indebted property developer. Central bankers and financial figures considered the impact that its more than $300 billion of unpaid debts would have on China’s economy if Beijing stuck to its commitment not to provide a bailout.

The tumult at Evergrande appeared to die down more recently after the company made payments on multimillion dollar bonds. But its financial woes have already set off a broader panic that has contributed to a wave of defaults among other developers. And their troubles are mounting.

Money is becoming harder to find because the cost of borrowing has soared, fewer people are buying apartments, and the value of property is falling. Property companies have $40 billion of payments to make to foreign investors alone over the next two months, according to one estimate.

Kaisa Group, China’s first developer to default on overseas debt six years ago, told investors last week that it was facing “unprecedented pressure.” The stress to Chinese developers is so intense that the United States Federal Reserve flagged it as a potential risk to the American economy in a report this week.

As Chinese real estate developers fail to meet their most basic financial obligations, experts are warning that Evergrande’s problems have already started to have a dangerous spillover effect. Evergrande and Beijing are managing the company’s struggles under a veil of secrecy, allowing it to meet some payment deadlines without explaining how.

The approach may stem panic, but it papers over broader pressures on the sector and an economy that has long turned to the property market to help power its growth.

“The fundamental situation for Evergrande hasn’t really changed,” said Matthew Chow, a China property analyst and director at S&P Global Ratings. “We remain sure that default is almost a certainty.”

Another potentially devastating deadline for Evergrande approaches on Wednesday, when the grace period on $150 million worth of bond payments will end. It is unclear how Evergrande has been able to secure the money needed to make its recent payments when the company has no cash, no one is buying its apartments, and a very long line of creditors stands outside its doors.

More than a million home buyers are waiting for unfinished apartments, and the company may owe money to just as many construction workers and painters, landscapers and employees. Michael Yang, an Evergrande salesperson in the southern city of Chongqing, is one of them.

His monthly salary at Evergrande, including commission, used to be $3,900. But Mr. Yang said he received a notice last month informing him that, beginning in November, he would be suspended for a year with a minimum pay of $280 a month.

“It’s not enough for me in Chongqing, for sure,” he said.

Mr. Yang said Evergrande told him and other colleagues that the money the company saved by not paying regular salaries would be used to finish construction on apartments that it had sold but not yet completed. The news was so discouraging, Mr. Yang said, that he has already started interviewing for new jobs, even though he and his new wife are planning to start a family.

“It suddenly disrupted my life plan,” he said. “I didn’t expect it to come so quickly.”

In the absence of information from Evergrande about how it will find the money to keep its operations going, China’s internet was briefly alight last month with reports that the authorities planned to force Evergrande’s billionaire founder, Xu Jiayin, to help pay some of the millions of people to whom the company owes money.

Evergrande would not confirm the reports, which were repeated in state media. Instead, it published photographs of a dozen development projects that it said had just been completed.

An economic reshaping. China is enacting new measures to change how business works and limit executives’ power. Driven by a desire for state control and self-reliance, these changes mark the end of a Gilded Age for private business that made the country into a manufacturing powerhouse and a nexus of innovation.

China’s leader, Xi Jinping, is recasting China’s business world in his own image. Above all else, that means control. Where executives once had a green light to grow at any cost, officials now want to dictate which industries boom, which ones go bust and how it happens.

Many measures have already been implemented. The Chinese government has tightened supervision of the country’s internet Goliaths, declared all financial transactions involving cryptocurrencies illegal and detained top executives from troubled companies. Meanwhile, China’s largest developer, Evergrande, is teetering with no word from officials about a bailout.

What China does next will be significant. If Chinese officials save Evergrande, they risk sending a message that some companies are still too big to fail. If they don’t, as many as 1.6 million home buyers waiting for unfinished apartments and hundreds of small businesses, creditors and banks may lose their money.

The long-term outlook is unclear. Some analysts say Mr. Xi’s measures and the push to curb excess borrowing have already made a big difference. But the world’s No. 2 economy is slowing, and the Chinese government may have to work harder to rekindle it.

“All employees of the group swear to ensure the construction of the project with the greatest determination and strength, and complete the delivery of the real estate with the highest quality and quantity,” Evergrande posted on one of its accounts on the social media app WeChat.

Chinese households don’t seem to be buying it. Across the country, property developers have warned of plummeting sales. Evergrande reported a 97 percent drop during its most recent sales period compared with a year ago. The fall in reported sales at Kaisa prompted Fitch to downgrade its rating of the company on Tuesday.

The Chinese authorities have tried to instill confidence and reassure investors by calling Evergrande’s risks manageable and pledging to ease China’s capital controls on the movement of money in and out of the country, which would help Evergrande and other property developers make payments to foreign creditors.

The National Development and Reform Commission summoned some of the country’s biggest developers to a meeting in Beijing last month and called on them to make “active preparations” to meet payments to foreign investors. The regulator emphasized the importance of following “financial discipline and market rules.”

While Beijing had previously indicated that it would not intervene to save Evergrande — part of a wider strategy to clean up the sector’s debt problem — the Chinese authorities have a history of quietly rescuing the country’s corporate giants. Before Evergrande, there was HNA, a conglomerate that started as an airline and grew on borrowed money to acquire Swissport, Ingram Micro and big stakes in Deutsche Bank and Hilton Hotels.

HNA eventually buckled under the weight of its unpaid bills. In February, it was placed into bankruptcy administration as the restructuring of its hundreds of subsidiaries happened in the background. Only the occasional story — like accusations that $10 billion had been embezzled from HNA’s corporate coffers, or that its top executives had been detained — brought the company back into public focus.

After months of silence, HNA said last month that its creditors had agreed to a solution for breaking it apart, without offering much more information.

Like HNA, Evergrande has hired restructuring experts, but not much is known about whether the authorities plan to break up the company or who, if anyone, will be saved. Some Evergrande investors were given the opportunity to learn more about the company’s vast challenges during a recent meeting, but signed confidentiality agreements ordering them to keep the information secret ahead of a potential restructuring.

For the many people who have found their lives upended by the turmoil playing out in China’s property sector, it may be a very long time before they get answers. Lei Tenglong, an athlete with Hebei F.C., the soccer club owned by China Fortune Land, recently told state media that he and his teammates were in the dark about when they would return to the field.

“We have no idea when our holidays will end,” he said.