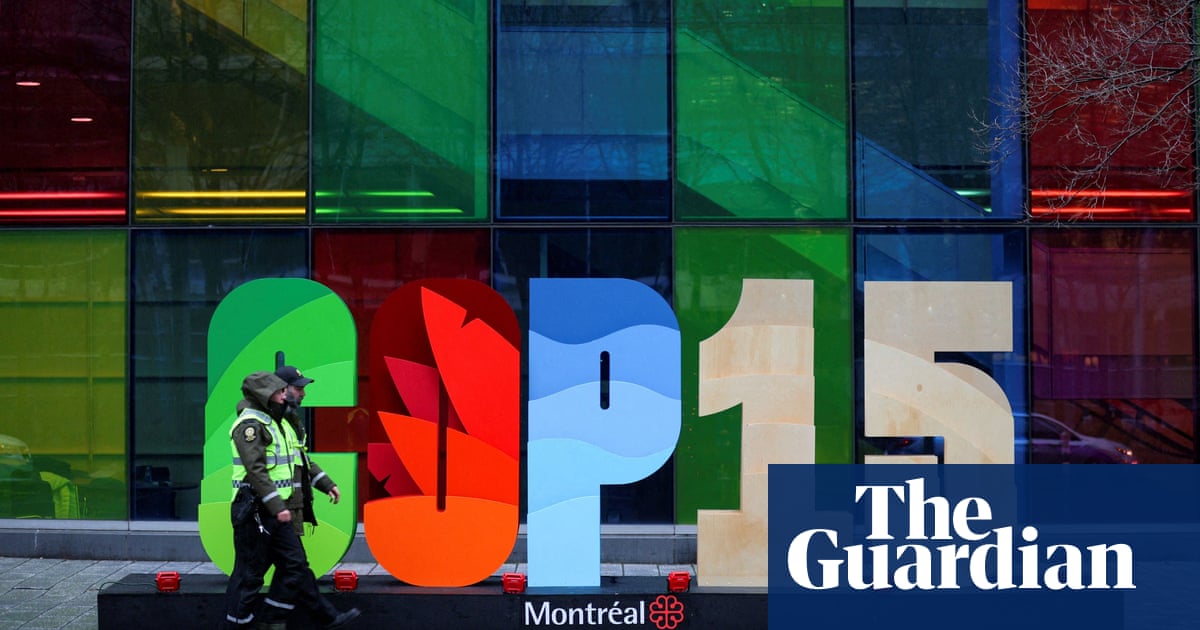 A potentially transformational agreement for nature is close to being reached at Cop15 in Montreal, which could bring better protection for Earth’s vital ecosystems such as the Amazon and Congo basin rainforests, big reforms to agriculture and better protection of indigenous territories and rights.

After four years of negotiations and 12 years since the last biodiversity targets were agreed in Japan, the Chinese president of Cop15 put forward its recommendations for a final agreement after two weeks of intense negotiations at the UN biodiversity summit in Canada.

Over the last few days, the French president, Emmanuel Macron, the British prime minister, Rishi Sunak, and other world leaders called for an ambitious package to tackle scientific warnings about 1m species at risk of extinction ahead of the release of the text.

Heads of delegations will respond to the text in a meeting later on Sunday, with a plenary expected to be held in the evening and negotiations set to continue overnight. China’s environment minister, Huang Runqiu, the Cop15 president, said he wanted the final text to be adopted on Monday.

The package, which includes this decade’s targets to halt the destruction of the planet’s life-sustaining ecosystems, includes plans to protect 30% of Earth for nature, reform $500bn (£412bn) of environmentally damaging subsidies and halt pollution that damages ecosystems by the end of the decade. Countries from the global north would contribute $30bn a year for conservation by the end of the decade if the agreement is adopted.

Strong language for the protection of indigenous rights and territories is emphasised throughout the 23 targets and four goals that make up the main agreement, known as the post-2020 global biodiversity framework.

Plans to create a fund for biodiversity to support the new conservation efforts, housed under the UN’s Global Environment Facility, are included in the package presented by the Chinese presidency. A new fund was a key demand from developing countries in the agreement following walkouts of talks earlier in the week.

Environmental groups and observers said that if the deal was implemented in full and backed by financial resources, it could be the start of a major change in humanity’s relationship with nature.

But they cautioned that no previous UN biodiversity targets have been met by governments. Some expressed disappointment at the weaker-than-hoped language on consumption and business action on nature after a proposal for mandatory disclosures was not included in the text, and the term “nature positive”, which scientists had said would be the biodiversity equivalent of “net zero”, did not appear.

“We’re almost there,” said Canada’s environment minister, Steven Guilbeault, who has played a key role at Cop15 in shaping negotiations. “[It is] a text that is genuinely trying to chart a middle-of-the-way course … Many elements are there. If adopted, it will represent a massive change,” said one observer close to the talks.

“We’re now only a degree or two removed from a deal that could catalyse global nature protection,” said Li Shuo, a policy adviser for Greenpeace China, who has been following the negotiations closely. “The shell of global biodiversity protections is here. But we have two days to fill it with specific figures to hold governments to account.”

Noelle Kumpel, the head of policy at Birdlife International, said the draft has a clear mission to halt and reduce the loss of biodiversity by 2030 but that “the rest of the framework currently fails to set a clear roadmap to how we will achieve this”.

Eva Zabey, the executive director of Business for Nature, said the latest text signalled to large businesses they would be required to assess and disclose their impact on nature but it should be stronger. “Voluntary action is not enough,” she said. The target of making businesses halve their negative impacts on biodiversity has also been removed.

Another contentious issue was the inclusion of “nature positive”, which many scientists said was important to get into the final text as a signal of the sort of ambition that should be agreed. “Although the 2030 goal of ‘take urgent action to halt and reverse biodiversity loss’ is weaker than ‘to halt and reverse’, this is still a strong call to action,” said the Oxford biology professor EJ Milner-Gulland.

“I think the main issue is that the can is being kicked down the road as we are lacking clear targets and milestones for many of the most important things.”

However, she said it was good to see concrete figures on the finance side. “I also just hope that we get some kind of deal that we can work with, even if it’s imperfect – every deal is a compromise,” she said.

Find more age of extinction coverage here, and follow the biodiversity reporters Phoebe Weston and Patrick Greenfield on Twitter for all the latest news and features