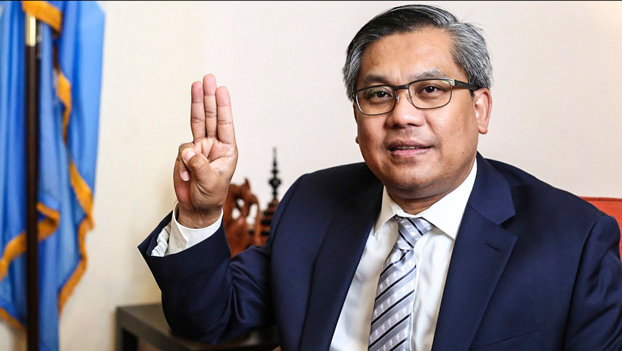 Kyaw Moe Tun, Myanmar’s ambassador to the United Nations, will continue to serve as his country’s permanent representative to the international body in New York for another year, a position he has held since 2020. The United Nations General Assembly Credentials Committee decided to uphold his status at a meeting on Monday, though a formal announcement has yet to be made.

Myanmar’s military junta, which seized power from the elected government in a February 2021 coup, opposes the move. Its information team said in a comment on the instant-messaging software app Viber on Wednesday that Kyaw Moe Tun had been fired from his position because of his treason against the government. The junta also said he represented “terrorist groups,” such as Myanmar’s shadow National Unity Government, its armed wing the People’s Defense Force, and the Burmese legislative body in exile.

Kyaw Moe Tun, who does not represent the military regime, has spoken out against the junta for its attacks on and arrests of anti-regime protesters and ordinary citizens. The Burmese diplomat spoke with reporter Khin Ei Ei of Radio Free Asia’s Burmese service about his reappointment and the U.N.’s response to the violence and rights violations in Myanmar. The interview has been edited for length and clarity.

RFA: If you are appointed to the same position as the permanent representative for another year, do you see more opportunities for you to work on trying to resolve the crisis in Myanmar?

RFA: There has been criticism that the U.N. merely issues statements expressing concern about the crisis in Myanmar without taking any effective action to help the people there. Do you see any possibility that the U.N. could give more help and assistance to the citizens of Myanmar?

Kyaw Moe Tun: The Myanmar people are suffering, physically and mentally. Over 2,500 or nearly 2,600 innocent civilians have been lawlessly tortured and killed by the military junta, and a large number of people have been detained and imprisoned. Over 16,000 people have been arrested. The number of civilians who had to flee their homes for safety has been constantly rising, up to over 1.4 million so far. About 14 million Myanmar people have been facing the problem of scarcity of food according to U.N. data. That’s why, we, the Myanmar people, both local and foreign, the National Unity Government, and other organizations have been vocal about everyday challenges such as losing lives, insufficient food and various problems.

In the same way, on the New York front, we are telling the international community about the situation in Myanmar in many different ways. However, as the Myanmar people are saying, the international community, including the United Nations have not taken decisive action, as we have called for, so far. But in the way of multilateralism, some decisions can be made within a day, but others take days or longer.

In November, the Third Committee of the U.N. General Assembly submitted a draft resolution on Myanmar titled “Human Rights Situation of Rohingya Muslims and Other Minorities in Myanmar.” In that draft resolution, there are expressions that reflect the current happenings in Myanmar, although it does not cover the entire picture. The resolution was agreed to among the member countries. Also, the members of the United Nations Security Council, especially the U.K., have been working on a draft proposal for Myanmar since August, and it is close to being passed. We hear that the member countries are discussing the resolution. These are the progress.

If a resolution for Myanmar is passed in the U.N. Security Council, it is going to highlight the atrocities that the military junta is committing against innocent Myanmar people and put new pressure on the junta in some ways. That’s why I would like to request that the members of the Security Council listen carefully to the voice of the Myanmar people, to take their true aspirations and their troubles into consideration, and make decisions that will enable decisive and effective actions for their vulnerable situation.

RFA: The U.N.’s office in Yangon has suggested that the U.N. should cooperate with the military junta to help the people? What do you think of this?

Kyaw Moe Tun: The U.N. agencies in Myanmar are trying in many different ways to carry out their tasks, especially to provide effective humanitarian help to the people. What we always point out is that although we support them in giving humanitarian assistance to our people, the help should get to the actual people who are in desperate need of it. But we do not support the help that goes to those who are close to the military junta. Humanitarian help should indiscriminately reach all unfortunate people who are in need of it.

That’s why we have always suggested that the U.N. needs to connect and work with all parties involved in order to provide humanitarian assistance directly to the people who actually need it. All parties means all organizations, including the National Unity Government, ethnic revolutionary organizations, NGOs and social help groups and those on the front lines of the incidents. We always point out that these groups need to be helped indifferently and fairly with complete transparency. That’s why we continue to urge the U.N. agencies in Myanmar to listen to our suggestions and help the people only in the ways we have suggested and to reach out to those really in need and provide humanitarian assistance as soon as possible.

RFA: What can you say about the degree of recognition that the shadow National Unity Government has achieved from the international community, including the United Nations, and their relations?

Kyaw Moe Tun: If we look back on the NUG and our revolution, we started building from the ground up and after 22 months [following the military coup], the role of the NUG, ethnic revolutionary organizations, and those who are shaping the people’s revolution has become more and more crucial. This is an undeniable fact. That’s why we can’t look at the United Nations alone, which can have some delays in its decisions and actions as it is a multilateral organization that needs to take every member into account.

As Thomas Andrew, the special rapporteur on the situation of human rights in Myanmar, said, actions like coordinated and targeted sanctions are necessary because it takes a long time and effort for the U.N. to reach a common decision. Similarly, member countries have not yet come to a common decision on the crisis in Myanmar because of different opinions. It will take a certain length of time. Although some countries have not been publicly recognized, we have seen many of them connecting and working with the NUG and urging other members to do the same. That’s why, we can see the progress in the role of the NUG in the last 20 months and now. With this progress, I would like to request all members to continue and extend help together for the people of Myanmar.