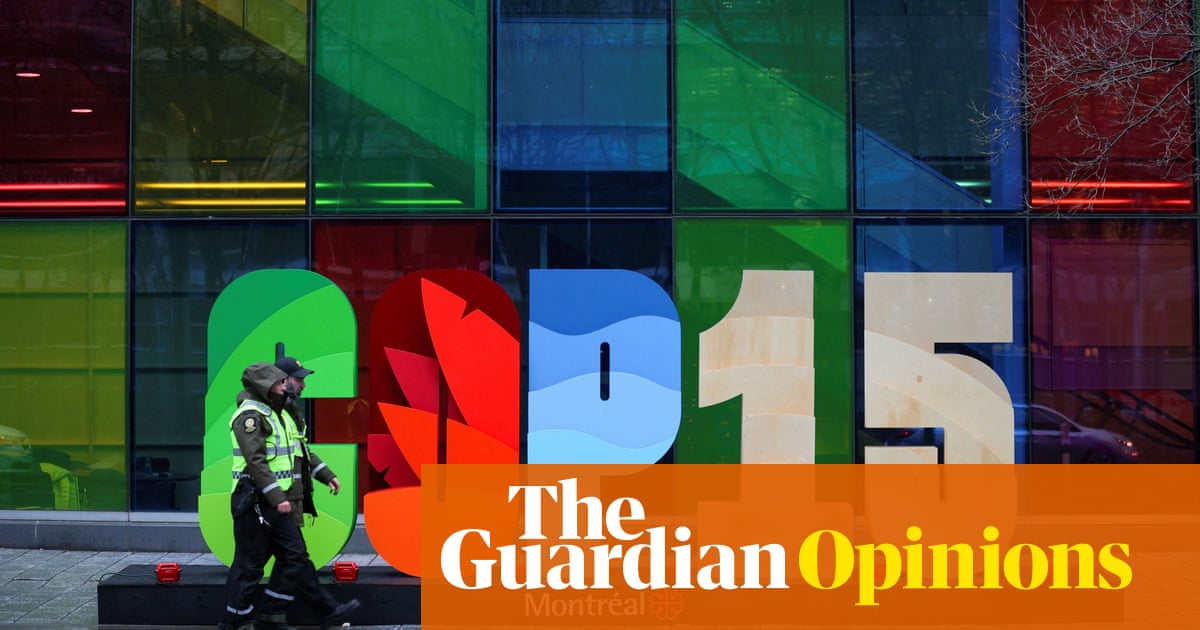 All procrastinators know the feeling: an enormous task is not close to being finished, time is slipping away and the pressure to act has become impossible to ignore. But despite the mounting unease, there is still not yet enough pressure to take action, and it is unclear if there ever will be.

At the Palais des congrès de Montréal convention centre at Cop15, after more than two years of delays, there is a sense that governments tasked with agreeing this decade’s targets for protecting life on Earth are in just such a situation.

These summits are rare events. The last meeting of this kind took place 12 years ago in Japan, a few months into David Cameron’s first term as the UK’s prime minister, the same year One Direction was formed, Spain celebrated its first World Cup victory and an Icelandic volcano disrupted air traffic in Europe.

The nature summit is a long way from the sunshine, coral reefs and intermittent food and water supplies of Cop27 in Egypt just two weeks ago, the quirks of an authoritarian dictatorship replaced by the bite of a Canadian winter and poutine.

There are good reasons for optimism: nature has shot up the international agenda during the pandemic. From Emmanuel Macron to Xi Jinping, world leaders say they want an ambitious deal to stop the loss of biodiversity. Montreal produced one of the most successful environmental agreements in history on the ozone layer in 1987, which continues to recover slowly.

Cop15 could be a punctuation point in history where everything finally starts to change and humanity plots a path to living in harmony with nature – if the tendency toward procrastination can be overcome. One million species are at risk of extinction and limiting global heating to 1.5C is on the line, but many negotiators have the look of a university student who has left their dissertation to the final few days of their course.

Next week, ministers will arrive in Canada to inspect what the negotiators have been doing for the past two years at meetings in Rome, Geneva, Nairobi and countless Zoom calls. In all UN environment talks, ministers arrive at the point when most of the agreement is finished and the difficult bits need to be sorted out.

Unless something changes radically, an awesome pile of documents awaits Thérèse Coffey, the UK secretary of state for environment, food and rural affairs, and her fellow environment ministers: a Frankenstein’s monster of ideas and suggestions from 196 countries on the 22 draft targets and four goals the world should agree to protect its biodiversity that they will have a just few days to bring into coherent life.

At the time of writing, negotiators have a week to work through more than 1,400 brackets – which reflect disagreement in a UN negotiation.

“I think the ministers are going to sack us all,” says one negotiator in the halls of the convention centre. “At the moment, it’s a horror show.”

Most university students who have left it late do not run the risk of embarrassing a superpower. But in Montreal, negotiators have no such luck. China is in charge of this Cop, which was meant to be held in Kunming in 2020, but was finally moved because of the country’s zero- Covid policy.

Before the pandemic, the Chinese government had been sounding out the French on how to capture the magic that led to the Paris climate agreement. This side of the pandemic, they are having to work with Canada – a few weeks after Xi and Justin Trudeau clashed after months of bilateral tensions – to get the bare minimum over the line. As Denmark learned at the climate Cop15 in 2009, it will be seen as the hosts’ fault if they do not succeed.

Publicly, the UN, NGOs and governments are quick to say that everything is fine: China is doing a great job and has shown fantastic leadership throughout the process. Part one of Cop15, which took place last year in Kunming last year, was entirely ceremonial, and they have been good enough to move the summit.

Privately, it is a different story. There is sympathy for Chinese organisers who have endured several three-week quarantines and little time with their families. But many are not convinced by the political buy-in.

“China is absent, has already de facto checked out and will play an irrelevant and ceremonial role. I was told by my friends in Beijing that the Communist party leaders are not interested in this conference: ‘We had our photo opportunity last year, now we leave the Canadians to wash the dishes’,” says one observer.

It is hard to know the full truth. China is playing a noticeably withdrawn and limited role, even by its own standards. At Cop27, their negotiators would speak with the international media. This time, their environment minister Huang Runqiu – the Cop15 president in the Alok Sharma role who is meant to cajole countries into agreement – does not go beyond selected questions and lengthy statements about how much China has done for Cop15.

It does not bode well for the difficult decisions that await negotiators and ministers in the coming days. But it appears that Canada is aware of this, working away to guide the agreement. Everything and nothing are still possible.