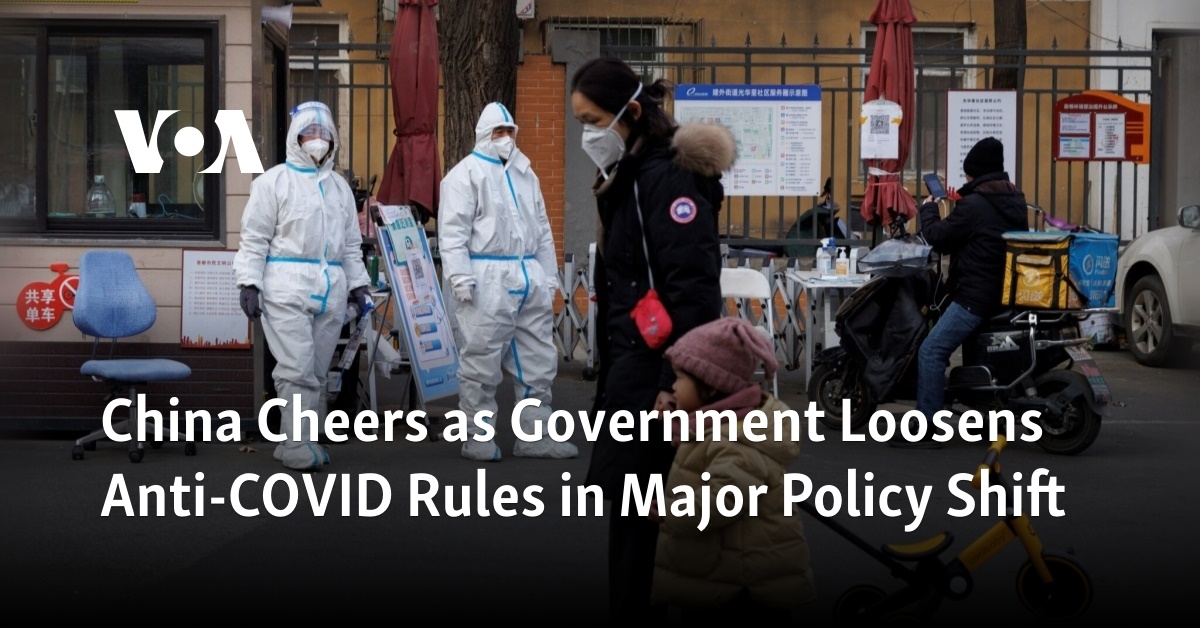 China announced on Wednesday the most sweeping changes to its tough anti-COVID regime since the pandemic began three years ago, loosening rules that curbed the spread of the virus but had hobbled the world’s second largest economy and sparked protests.

The relaxation of rules, which include allowing infected people with mild or no symptoms to quarantine at home and dropping testing for people travelling within the country, are the strongest sign yet that Beijing is preparing its 1.4 billion people to live with the disease.

Even though its borders remain mostly shut, citizens cheered the prospect of a shift that could see China slowly emerging back into a world three years after the virus erupted in the central city of Wuhan.

The announcement quickly soared to the top most viewed topic on China’s Weibo platform, with many people cheering the prospect of travelling, though some expressed worries about the greater potential for infections.

Analysts too, welcomed the shift that could reinvigorate China’s sagging economy and currency and bolster global growth.

“This change of policy is a big step forward,” said Zhiwei Zhang, chief economist at Pinpoint Asset Management. “I expect China will fully reopen its border no later than mid 2023.”

The announcement came after President Xi Jinping, who regards China’s relentless fight against COVID as one of his main achievements, chaired a meeting of the Communist Party’s Politburo on Tuesday.

Cities across China were gripped by protests over tough COVID policies late last month, in what was the biggest show of public discontent since Xi came to power in 2012.

While those protests diminished in days amid a heavy police presence, cities and regions around the country started announcing a mish-mash of easing measures that fed expectations for Wednesday’s announcement.

Many of the steps taken by individual cities or regions were reflected in the list of policy changes issued by the National Health Authority on Wednesday.

Officials have also been softening their tone on the health risks of the virus – bringing China closer to what other countries have been saying for more than a year as they dropped restrictions, and shifted towards living with the virus.

Gu Xiaohong, a top traditional Chinese medicine official, was quoted in the state-run Beijing Daily on Wednesday as saying China should change its official name for COVID-19 to reflect the virus’ mutation and that patients with light symptoms could recuperate at home.

But the looser approach has set off a rush for preventative drugs as some residents, particularly the unvaccinated elderly, feel more vulnerable to the virus.

Authorities across the country have warned of tight supplies and price gouging from retailers in recent days.

“Please buy rationally, buy on demand, and do not blindly stock up,” the Beijing Municipal Food and Drug Administration was quoted as saying in the state-owned Beijing Evening News.

In Beijing’s upmarket Chaoyang district, home to most foreign embassies as well entertainment venues and corporate headquarters, shops were fast running out of some those drugs, according to a resident.

“Last night the medicines were already in stock, and now many of them are out of stock,” said Zhang, a 33-year-old educationist, who only gave his surname.

“Epidemic preventions have been lifted…COVID-19 testing sites are mostly being dismantled… So, because right now in Chaoyang district cases are quite high, it is better to stock up on some medicines,” he said.

The surge in demand has driven up share prices in medicine manufacturers including cough syrup producer Guizhou Bailing, and Xinhua Pharmaceutical, which makes 40% of all Ibuprofen sold in China.

China’s yuan has seen a recent resurgence against the dollar, buoyed by the prospects that government would relax its “zero-COVID” policy.

But the currency remains set for its worst year since China unified official and market exchange rates in 1994, as its economy has been battered by COVID curbs.

In further evidence of that, China’s exports and imports shrank at a much steeper-than-expected pace in November, data on Wednesday showed.