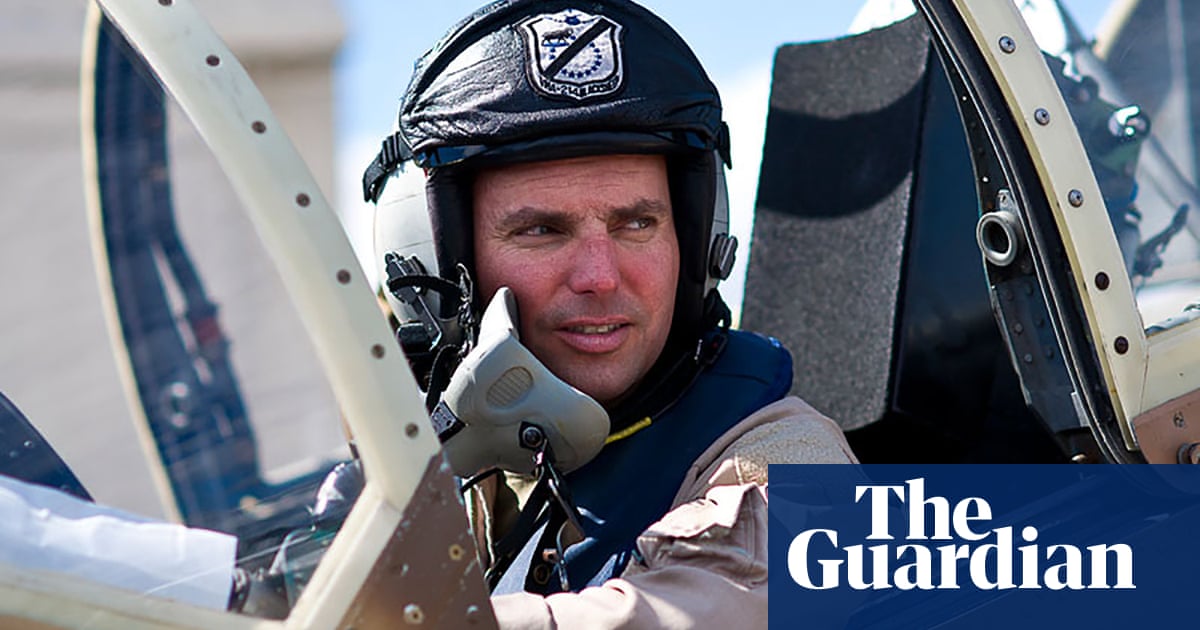 Planes are Daniel Duggan’s passion. His professional life has been spent flying military aircraft and training others. His social media is filled, almost exclusively, with videos of aircraft from around the world.

But a man so often untethered to the ground has now spent 45 days in segregated and high-security custody in New South Wales. He still does not know the charges against him.

The arrest of Daniel Edmund Duggan, an Australian citizen and former US Marines fighter pilot, on secret charges is a “politically motivated injustice”, his wife has said, arguing her husband is a “victim of the United States government’s political dispute with China”.

Duggan was “provisionally arrested” at his home in the NSW town of Orange by Australian federal police on 21 October, on request from the FBI, shortly after he returned to Australia from China.

His case has remained shrouded in secrecy: the charges against him are sealed because of a US grand jury indictment. But his arrest coincided with warnings from Australian and British authorities over the practice of former military pilots being offered lucrative contracts to train pilots in China. Duggan’s lawyer, Dennis Miralis, has said the 54-year-old pilot will fight any extradition request, and resolutely maintains his innocence.

“He denies having breached any US law, any Australian law, any international law,” Miralis said.

A court heard Duggan was set to be transferred to Australia’s highest-security prison, the “Goulburn Supermax” in regional NSW, as an “extreme high risk restricted inmate”, but the state’s corrective services agency has refused to comment on where he is being held.

The US has until 20 December – 60 days from his arrest – to formally lodge an extradition request, or he will be eligible for release.

Duggan, the father of six school-age children, is a naturalised Australian citizen who has renounced his US citizenship. He spent more than a decade flying in the US Marine Corps, reaching the rank of major and working as a military tactical flight instructor, according to his company website.

The company operated “an initial military training aircraft of the Chinese air force” known as a Nanchang fighter jet, according to its website.

“Our Nanchang aircraft are maintained to the same high standard using the maintenance systems used by the Chinese air force,” the website said.

Australian company records indicate Duggan moved to Beijing around 2014. Since 2017 he has been managing director of Avibiz Limited, “a comprehensive aviation consultancy company with a focus on the fast growing and dynamic Chinese Aviation Industry”, based in the eastern city of Qingdao, site of a strategically important naval base.

Mr Duggan’s position is very clear: he denies having breached any US law, any Australian law, any international law

It is unclear which, if any, of these activities attracted the attention of the US authorities, but both the British and Australian governments have warned its former military personnel not to be lured to China on lucrative contracts.

“Australians who work or have worked for the government in any capacity, particularly our Australian defence force, who come into possession of the nation’s secrets, have an obligation to maintain those secrets beyond their employment,” Australia’s defence minister Richard Marles said last month. “This is an enduring obligation and to reveal any of those secrets is a crime.”

Duggan’s wife, Saffrine Duggan, has launched a public petition calling on Australia’s attorney general to refuse any US extradition request – a “politically motivated … injustice” – and order the pilot freed.

“Daniel’s treatment in segregation and classification as an ‘extreme high risk’ inmate is completely unjustified – he has never been charged or convicted of any crime in Australia, and is a model father, husband, friend and Australian citizen.”

She said Duggan, through no fault of his own, “now finds himself a victim of the United States government’s political dispute with China”.

“Daniel has been caught in a geopolitical storm for working in China, doing work that has been done there for decades by western, African and European pilots for decades with the full knowledge of these governments.”

“Daniel is away from his children, his beloved family, friends and community because of an obviously politically motivated case based on a 2017 indictment that was part of the United States’ now-disgraced China Initiative.”

The China Initiative was a Trump-era national security program designed to address growing Chinese espionage, stealing US secrets, technology and research. But the initiative was abandoned by the justice department in February this year, having been marred by allegations it engaged in racial profiling against Asian-Americans, and by FBI misconduct, including deliberately basing cases on false evidence.

A former Marines pilot who has known Duggan for almost 20 years told Agence France-Presse it was widely known Chinese companies had been recruiting military pilots, and he struggled to comprehend why Duggan would now be targeted for arrest.

“I can’t imagine what secrets he would have, that he would pass along, that would have caused him this much trouble,” the ex-Marine, who requested anonymity because he still works for a commercial airline, said.

“I think the China work was pretty well-known by most ex-military pilots. I would have first heard about it well over 10 years ago … it’s just that it’s recently made the news.”

Duggan has indicated he will fight his extradition and has lodged a formal complaint with Australia’s attorney general, saying he has been treated like a convicted terrorist, without even knowing the charges against him.

In court this week, Miralis said his client had endured “extraordinary, unprecedented, unjustifiable” treatment, which he believed was the result of “foreign interference”.

Outside court, Miralis said his client “has been struggling”, having been segregated in prison. He said he has been denied vital medical care, as well as access to stationery so he could document his complaints at his treatment.

“As we informed the court, this is unprecedented, to have an Australian citizen being placed on the most severe inmate restrictions akin to people convicted of terrorist offences and multiple homicides in circumstances where he has never been in trouble with the police neither in Australia or anywhere in the world.

“In 22 years of practising criminal law specialising in extradition, I am yet to see something as remarkable as this.”

Miralis said the precise allegations against Duggan remain unclear because he was secretly indicted by a US grand jury and the details are not required to be divulged until a formal extradition request is made.

“While there is some commentary concerning the nature of the allegations, Mr Duggan’s position is very clear: he denies having breached any US law, any Australian law, any international law,” Miralis said. “This is a position that he will defend vigorously.”

Barrister Trent Glover, representing the US government, told court Duggan’s case had followed an “ordinary extradition process” and the Australian citizen could either waive the extradition, consent to it, or contest his eligibility to be surrendered to the US.