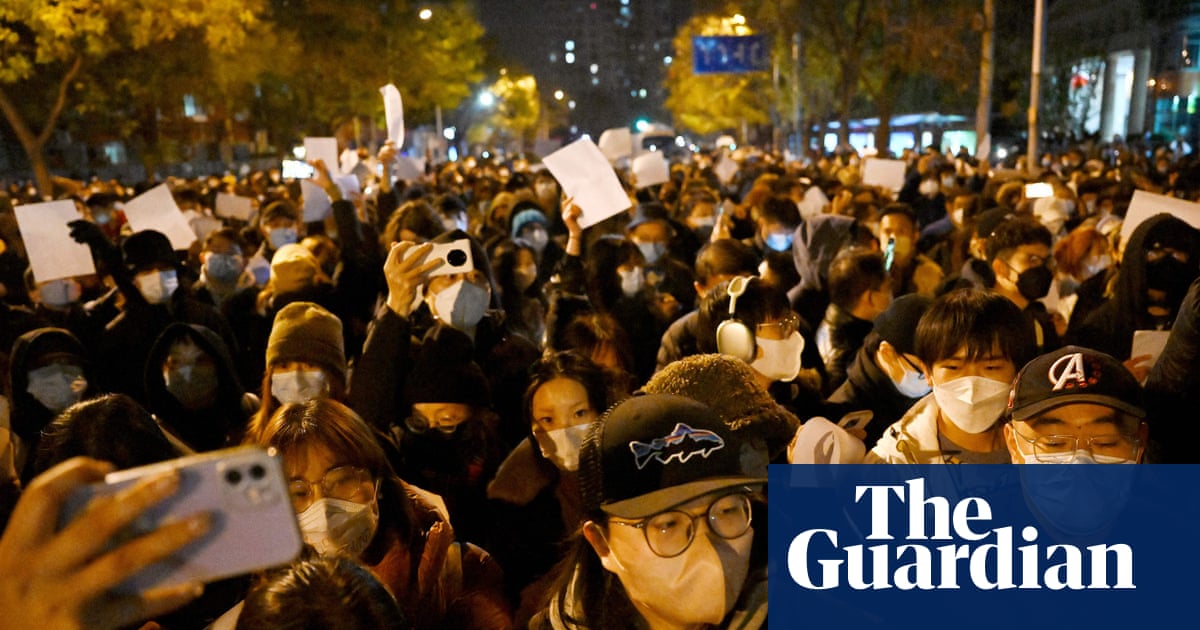 People living in China have expressed feelings of shock at the eruption of protests last week, with hopes that they continue, mixed with reservations about how successful they can be expected to be in challenging the one-party system.

The protests have led to a shift in China’s zero-Covid policy, with the government staging an abrupt turnaround to emphasise the virus’s reduced severity as well as pushing vaccination and personal mitigation measures.

Scores of people from across the country contacted the Guardian via a callout to share their reaction to the protests that have broken out in the country against the handling of the pandemic. The people who shared their views and experiences were mostly under 40, including a high number of university students and professional workers.

Several consistent themes emerged from readers in different parts of the country in response to the protests. Although the majority were based in several cities along China’s eastern coast, there were also responses from people living in central provinces, such as Hubei, as well as the south-western province of Sichuan and the north-western Shaanxi province.

Many respondents said they felt astonished that the protests had happened in a country where public dissent is rare, particularly given the powerful political demands that have featured in some. “They are so brave,” said Guang*, a university student based in Sichuan province. “Honestly, I never ever imagined protests could be so widespread in this country.”

While the protests were prompted by a deadly fire in western China, readers attributed different reasons to what fuelled them. Many underlined the role of the harsh economic conditions that repeated lockdowns have inflicted on people. “I can feel the recession around me,” said Beijing-based Chen*, who is in her 30s.“Obviously, the economy is heading down. Less people in shopping malls, the disappearance of small businesses and higher prices for daily goods are better proof than official data. It is just a catastrophe now, not because of Covid but because of stupid policy.”

Another factor mentioned by several was the role of the World Cup in causing public anger at the government to boil over. Following the economic and huge personal implications of living under constant testing and restrictions on movement, the global event stood in contrast with the situation in China, said Dan*, who has lived there for several years and works in marketing in Shenzhen. “Seeing the whole world open up and having fun while you can’t even leave your city is demoralising and infuriating,” he said.

While support for the demonstrations – in which protesters have used a variety of symbols, including holding up blank sheets of paper to stand against censorship – was strong, some expressed reservations about what they could really achieve. “The demonstrations needed a clear, more united set of aims,” Jing*, a 21-year-old woman living in Beijing, said. “I am pessimistic about how long this protest [will] last. People in this protest have different goals. Most people just want their lives to be back to normal while few people realise that tragedies will still happen as long as this government exists. If we can’t get united, we cannot achieve what we protested for.”

Although the political aims of demonstrators may differ, some readers emphasised that just achieving an end to China’s zero-Covid policy, rather than a more wholesale change to the regime, would be a win. “Not every Chinese [person] cares or hopes to witness democracy, but merely [getting back] what we used to have – going out freely, no PCR tests, no endless lockdown – sounds like a luxury now,” said Fang*, a 27-year-old freelancer in Shenzhen.

The unprecedented protests appear to have made progress in this regard, with authorities lifting restrictions in cities including Guangzhou and Chongqing. A shift in Beijing’s policy also appears to be under way, with an expert saying to state media on Sunday that management protocols could be downgraded.

While there were protests in about 20 cities, responders to the callout emphasised that they were far from universal across Chinese cities. “There are no protests around me, and the protests in other cities can be seen in foreign news media, but not in domestic media,” said 23-year-old Chun*, in a province in the country’s south-west.

Xiang, a 28-year-old private sector worker in Wenzhou, emphasised that without a virtual private network (VPN) it was difficult to access information about the wave of protests. “Most [people where I live] are factory workers. A lot of people here are unaware of protests, and what’s going on with protests, since on the internet that information is being censored and removed,” Xiang said.

However, a common view was that the movement has “seeded hope”. “Sparks of fire will grow into a conflagration at the right moment,” said Tao*, a Shanghai-based fintech worker in his 40s in Shanghai.

Alongside their views on the demonstrations, scores of people shared their experiences of living under the stringent Covid rules. As well as descriptions of daily testing and suddenly changing restrictions, some acknowledged that the policy had initially been successful, protecting China from the colossal death tolls suffered by other countries, including the UK and the US.

Wei*, a Tianjin-based woman in her 30s, was among those who spoke of the early successes of the zero-Covid policy. “The beginning of Omicron in [early 2022] was a turning point. Before that, zero-Covid was working, though at a huge cost. What to do next is a dilemma … A layered solution is needed,” she said.

Huan*, a 24-year-old customer service worker in Shijiazhuang, said the wave of demonstrations had made them feel less alone in their anger. “This nationwide protest has made me realise that I am not the only one who is angry, and there may be hope for this country.”

*Names have been changed.