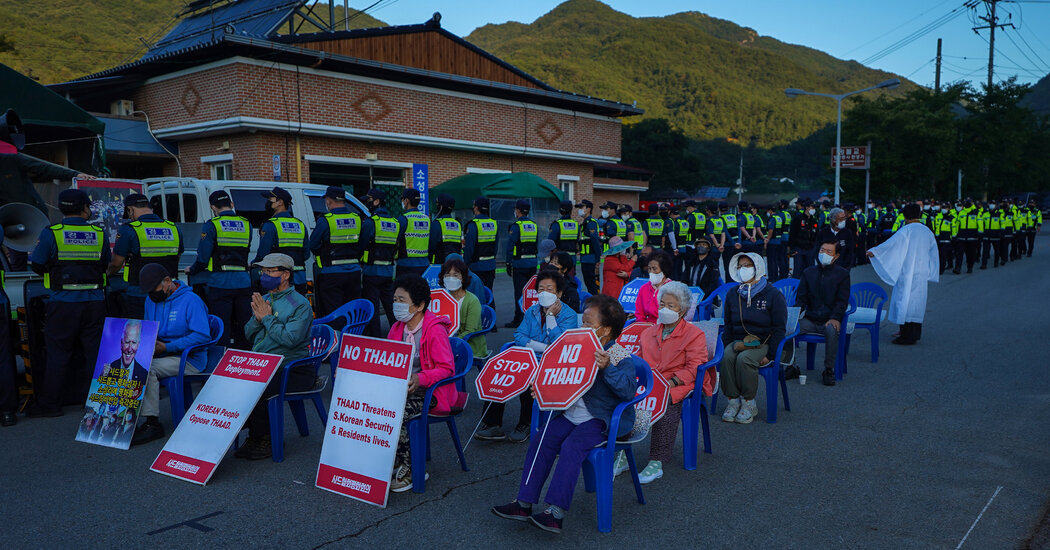 SOSEONG-RI, South Korea — Do Geum-yeon, 86, has lived in this valley in South Korea all her life. During the Korean War in the 1950s, her village was so peaceful that she remembers refugees taking shelter in its humble homes and quiet hills. These days, though, Ms. Do spends much of her time protesting an unwanted guest: an American military base that is expanding on a nearby hilltop.

“Now, if there is war, our village will become the first target because of that machine up there,” she said impatiently.

The “machine” Ms. Do was referring to is the Terminal High Altitude Area Defense system, a powerful radar and missile-interceptor battery also known as Thaad. Five years ago, it was brought to this hamlet about 135 miles southeast of Seoul by the United States, infuriating China and prompting it to unleash economic retaliation. ​

Washington and Seoul said the weapons system was crucial in their defense against North Korean aggression. China argued that the United States was using North Korea as an excuse to expand its military presence in the region and make implicit threats toward its most formidable competitor. Villagers like Ms. Do and their supporters, including labor activists, have tended to agree.

Now, the Thaad system, located in an area once known for its melon patches, has become a symbol of the broader challenges facing South Korea as it ​tries to strike a balance between China, the country’s largest trading partner, and the United States, its main security ally.

“​Thaad has brought nothing but harm to South Korea, causing economic damage and heightening tensions,” ​said ​Kang Hyunwook, another ​protester. Russia’s invasion of Ukraine earlier this year has magnified those concerns, he said. “If South Korea sides with one party in the rivalry between the U.S. and China, we could suffer the fate of Ukraine.”

Few things showcase the many polarizing divides in South Korea better than the Thaad system. For those who favor a strong alliance with the United States, it represents Washington’s unwavering commitment to its Asian ally. For​ those who oppose​ it, it is a reminder of the dangers of being drawn into a rivalry between two major powers.

Seongju County, which includes this village, had been known mainly for its farming community before residents grabbed national headlines protesting the arrival of the Thaad system five years ago. Villagers here — and many South Koreans elsewhere — were concerned that it could place South Korea on the front lines of a potential Sino-American conflict.

As Beijing and Washington clash over issues such as Taiwan, global supply chains and the South China Sea, anxieties have been on the rise. Numerous anti-American banners line both sides of the road that winds through the village and up to the American military base. “Yankees, go home! Thaad, go home!” they demand.

During a recent early-morning rally, Ms. Do and 20 other protesters sat on plastic chairs on a two-lane asphalt road, shouting: “We don’t need Thaad! We need peace!” An hour later, police officers ​removed them — carrying them in their chairs — so the road could be cleared for trucks and water and fuel tanks going up the hill to the Thaad base​.

South Korea has long been careful not to take sides in the rivalry between the United States and China, benefiting from a national strategy known as “anmigyeongjung,” which loosely translates to “the United States for security and China for the economy.”

Washington has provided security for Seoul since the Korean War. But after South Korea established diplomatic ties with Beijing in 1992, China quickly replaced the United States as the country’s biggest trading partner, helping to fuel a thriving, export-driven economy​. About 30 percent of South Korean exports go to China or Hong Kong​ — almost equaling the country’s trade with the ​United States, Japan and Europe combined.

Over the years, it has become increasingly difficult for South Korea to enjoy the best of both worlds.​ President Yoon Suk Yeol has aligned his country more closely with Washington, deepening ties in missile defense and supply chains to help deter North Korea. He has done so at the risk of provoking Beijing.

Under Mr. Yoon, South Korea opted in to the Indo-Pacific Economic Framework; increased trilateral military cooperation with the United States and Japan;​ and joined those nations and Taiwan in preliminary talks for a technology alliance known as “Chip 4” — all moves opposed by Beijing.

“Like it or not, China is a massive market, and abandoning it isn’t an option,” SK’s chairman, Chey Tae-won, told reporters in July.

That same month, Zhao Lijian, a spokesman for the Chinese foreign ministry, warned that South Korea should “keep in mind its own long-term interests.” ​In 2017, when the Thaad battery first arrived, Beijing shut down tourism to South Korea and ​restricted exports like ​K-pop in response.

Many people in the country saw the retaliation as bullying. South Koreans now regard​ China more unfavorably than North Korea and Japan, its former colonial ruler, according to a survey conducted in July.

“The Thaad deployment has become a weapon for China to divide South Koreans and drive a wedge into the alliance,” said Cho Kyunghwan, a research fellow at the Korea Institute for National Unification in Seoul.

Mr. Yoon’s predecessor, Moon Jae-in, tried to improve relations with Beijing ​​by pledging a “Three Nos” policy: no​ additional Thaad systems; no participation in ​American missile defense networks; and no trilateral military alliance with ​Washington and Tokyo. Mr. Yoon has said he is not bound by those promises.

In an interview with The New York Times last month, Mr. Yoon said North Korea’s growing nuclear threat compelled South Korea to cooperate more closely with Washington on missile defense​ and that the Thaad system was a matter of national security that would not be negotiated with Beijing​.

He told The Times that he would support another Thaad system in the country, depending on the evolving threat from North Korea. He also emphasized: “Our defense system is to deal with the North Korean threat, not China.”

Both American and South Korean defense officials have complained that the village protests have limited traffic in and out of the base, at times forcing American military personnel to travel there by helicopter.

In May, Gen. Paul J. LaCamera, commander of the United States military in South Korea, called for “unfettered access” to the base to ensure logistical support and to help speed up construction.

Seoul and Washington have been building new facilities at the base to train soldiers and improve their living conditions. (The allies have no official name for the military installment yet, simply referring to it as the “Thaad site” as they race to complete an environmental impact study before formally approving the stationing of the Thaad system here.)

Defense Minister Lee Jong-sup of South Korea said that the slow pace of construction has forced many of the hundreds of South Korean and American troops stationed there to live “in tents and shipping containers.” South Korean police have had to remove protesters almost daily.

After a North Korean missile flew over Japan this month, the United States military brought new equipment to the base to improve the Thaad system’s link with other antimissile systems located in South Korea. North Korea is also working hard to thwart missile defenses in the region, testing weapons considered harder to detect and intercept.

“They parked Thaad in our village without asking us because we were the smallest and weakest village and they thought old people living here would not protest,” said Lim Soon-boon, 68. “But it dawned on us that they were really considering us and our country cannon fodder in a war between the U.S. and China.”