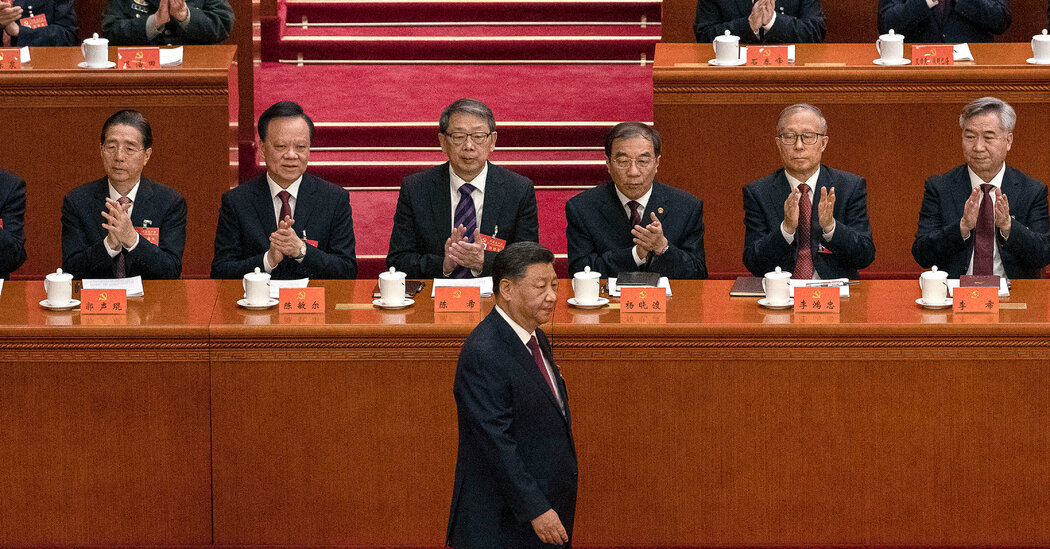 The world’s most important non-change in leadership is happening right now in China.

At a Communist Party congress this week, Xi Jinping, the country’s top leader for the last 10 years, is all but certain to secure another five years in the job. Xi’s recent predecessors each left office after about a decade to protect China from abuses of power like those during the chaotic Mao era. Xi is expected to cast this precedent aside, taking the country down a more authoritarian path as economic growth teeters and tensions flare with the West.

My colleagues in and around China are covering this pivotal moment. I’m going to focus on what it might mean for the climate.

Xi has ramped up China’s ambitions for reducing carbon emissions and slowing global warming. He reiterated those goals in typically grandiose language this week. (“We must uphold and act on the principle that lucid waters and lush mountains are invaluable assets.”) But he has also allied himself with a leader whose actions are threatening to throw the global climate fight in reverse: President Vladimir V. Putin of Russia.

Climate change will continue to test China, and Xi

This summer, China sweltered through more than two months of record-high temperatures, the country’s most prolonged heat wave since modern records began in 1961. The Yangtze River dried to a trickle. Factories halted production to reduce the burden on power grids. The government’s chief forecaster, Chen Lijuan, told a Communist Party news outlet that the extreme highs could become a “new normal.”

Last year, the catastrophe was the opposite: People drowned in subway cars as torrential summer rain flooded tunnels in the inland metropolis of Zhengzhou.

Scientists warn that global warming is widening the swings between wet and dry extremes in many regions, including China. Xi is no doubt keenly aware that political power in China has for centuries been closely linked with leaders’ ability to manage floods, droughts and crop failures.

With all its steel and cement plants, coal-fired power stations and power-guzzling factories, China is by far the biggest emitter of planet-warming gases today.

Xi wants China’s industrial economy to keep growing. But he’s also vowing to make it greener. He has taken some steps to deliver, and more will be needed in his next term if he intends to see his pledges through.

In 2020, Xi promised China’s emissions would peak within a decade. Since then, Chinese officials have confirmed the timelines for reductions in specific industrial sectors and have set targets for wind and solar capacity that are even more ambitious than Xi’s 2020 goals would have required.

Last year, Xi said China would stop building coal-burning power plants overseas. As of August, 26 out of 104 such projects had been shelved, preventing 85 million tons of carbon dioxide from being added each year into the atmosphere, according to the Center for Research on Energy and Clean Air.

… but tensions with the West are complicating things

It was only last year that China and the Biden administration surprised climate negotiators in Scotland by announcing a joint effort to curb fossil-fuel emissions. Since then, though, the two powers have continued to clash over trade, technology, human rights and more — the “stormy seas” for China that Xi warned about at this week’s party congress. That could make it harder for the two countries to collaborate more on climate.

Officially, China suspended climate talks with the United States as retaliation for Speaker Nancy Pelosi’s visit to Taiwan in August. (The Communist Party considers Taiwan its territory and has not ruled out annexing the self-governing, democratic island by force.)

But even if the world’s two biggest emitters start talking again, one of the United States’ newest and most ambitious climate efforts could exacerbate trade tensions. The Inflation Reduction Act includes incentives for domestic production of clean energy hardware including batteries and wind turbines. Chinese companies dominate these industries — a source of frustration for American politicians who say that efforts to fight global warming are helping businesses in China and enabling coercive labor practices there.

And then, there’s Russia. Xi has emerged in recent years as President Putin’s most powerful enabler. China’s purchases of Russian oil and gas have frustrated American and European efforts to isolate the Kremlin for its war in Ukraine.

In 2014, Xi and Putin met in Shanghai to sign a huge gas deal. Five years later, they celebrated Xi’s 66th birthday together in Tajikistan; Putin offered Russian ice cream as a present, according to China’s official news agency. The two men met again at this year’s Winter Olympics in Beijing. A joint statement afterward said their nations’ friendship had “no limits.”

Essential news from The Times

Before you go: Exploring identity and sustainability

The Nigerian fashion designer Bubu Ogisi founded her own label in 2013. Her collections, composed almost entirely of handcrafted pieces, tell stories of Africa while preserving traditional artisanal techniques and celebrating ecologically friendly fabrics. “It’s about fusing what is old with what is new, preserving what is wasted, and recreating that and reconstructing that into new,” Ogisi said.

Thanks for being a subscriber. We’ll be back on Friday.

Claire O’Neill and Douglas Alteen contributed to Climate Forward. Read past editions of the newsletter here.