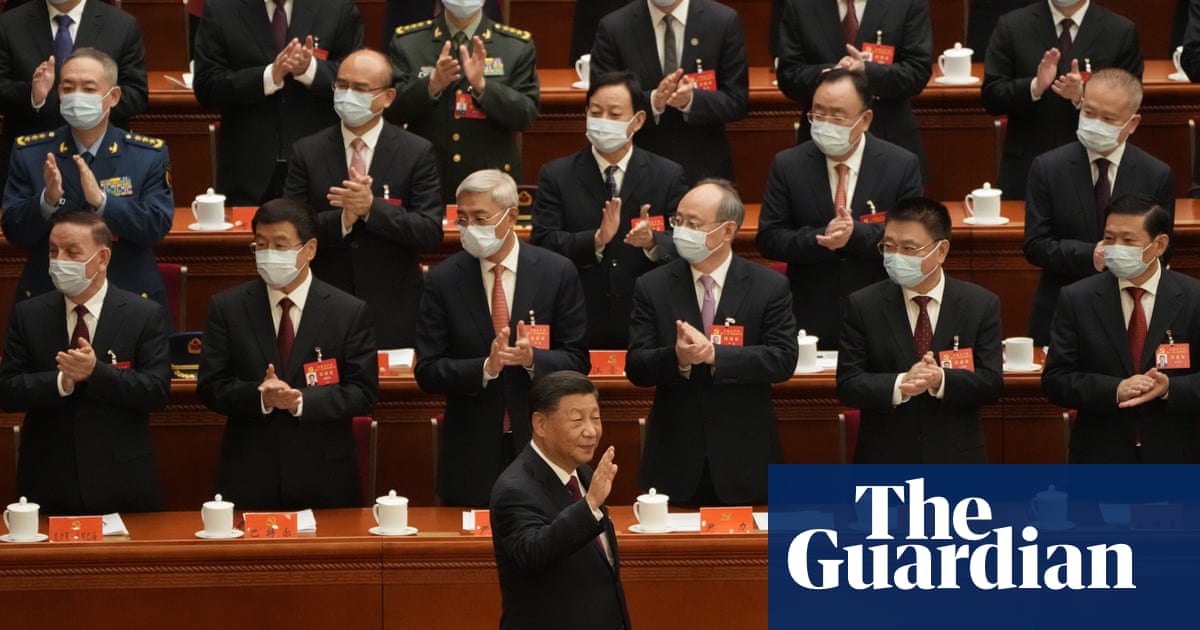 Xi Jinping celebrated China’s crushing of Hong Kong’s autonomy and warned Taiwan that the “wheels of history” are turning towards Beijing taking control of the island democracy in his speech opening the Communist party congress.

The most important gathering in the five-year Chinese political cycle is expected to hand Xi another five-year term running China, cementing his position as the most powerful leader since Mao Zedong.

The Chinese president’s address to delegates, nearly two hours long, offered a rare if opaque glimpse into his plans and hopes for the country. It suggested the direction of China under Xi’s leadership – characterised by growing social control, regional aggression, and rivalry with the west – would probably continue.

He said the country had increased its global influence over the last five years, and warned against foreign interference in the dispute about Taiwan. He did not name any countries but there have been escalating tensions with the US.

He lauded the decision to crack down on Hong Kong’s pro-democracy movement by bringing in national security laws that have effectively criminalised dissent. The actions had restored order and marked “a turn for the better in the region”, Xi said.

Many Taiwanese look to the crackdown on Hong Kong as a warning of a grim future should they come under Beijing’s rule. China’s communists have long held that Taiwan – which the CCP claims is a province of China – must be “reunified” with the mainland and it is at the core of Xi’s plan for China’s “national rejuvenation”.

“The wheels of history are rolling on towards reunification and the rejuvenation of the great Chinese nation. Complete reunification must be realised and it can without a doubt be achieved,” Xi said on Sunday, drawing the strongest applause of the speech.

“We will continue to strive for peaceful reunification with the greatest sincerity and utmost effort, but we will never promise to renounce the use of force and reserve the option of taking all measures necessary.”

Taiwan’s government maintains it is a sovereign nation with no need to declare independence, and a growing majority of its people reject the idea of Chinese rule.

In remarks that analysts said were unusually strong for a speech which is normally very inwards looking, Xi emphasised the “Taiwan question” was a matter for the Chinese, and repeatedly railed against foreign interference.

China was angered when the US House Speaker, Nancy Pelosi, visited Taiwan in August. Beijing responded with aggressive military manoeuvres. Joe Biden has promised the US would defend Taiwan if it was attacked.

A strict zero-Covid policy, which has isolated China from a world slowly trying to return to something like pre-pandemic life, will also stay in place. Xi defended his hardline approach, saying it “put people and their lives above all else”.

The party congress officially gathers about 2,000 delegates representing 100 million members of the Chinese Communist party, to discuss the last five years and future course for the next half decade.

In reality the delegates are largely there to rubber stamp the decisions of the leadership, hammered out behind closed doors in the previous weeks and months.

Sung Wen-ti, a political scientist with the Australian National University, said Xi’s comments about Taiwan could be viewed optimistically.

“It’s heavy on the ‘oughts’ and the ‘musts’ but pretty ambiguous on the ‘hows’,” Sung told the Guardian. “The lack of ‘hows’ is a sign he wants to preserve policy flexibility, and doesn’t want to irreversibly commit to a particularly adversarial path.”

Sung said the lack of specifics was a sign that despite the escalation of recent months, Xi “still doesn’t intend to have his own timeline disrupted by the internationalisation of the Taiwan issue”.

Xi’s rule has been marked by international condemnation of human rights abuses and crackdowns on religious and ethnic minorities in Xinjiang, Tibet and Inner Mongolia. He said the party would “remain committed to the principle that religions in China must be Chinese in orientation”, suggesting little chance of pressure lifting.

Xi paid lip-service to the idea of rule by consensus in his speech, telling delegates: “We must accept the people’s criticism and oversight.”

In reality, Beijing and the entire country have been locked down under tight security rules, in a bid to prevent any disruption to the congress. All Beijing bridges have security guards stationed at them after a lone protester hung anti-Xi banners off a Beijing overpass last week and was arrested. Dissent is so stifled that people are being handed permanent social media bans simply for sharing images of the protest, the Wall Street Journal reported.

“With the ubiquity of WeChat in daily life in China, this punishment is the digital equivalent of cutting an offender’s hand off. Hard to imagine a more effective tool to enforce self-censorship,” said Hong Kong-based lawyer and activist Anthony Dapiran on Twitter.

This party congress is the first since the removal of term limits for party leaders, allowing Xi to remain “leader for life”.

Further constitutional changes are expected this week to deepen his power and place within the party, including enshrining Xi as the “core” of the CCP and his ideas as the party’s underpinning ideology. Reshuffles within the leadership ranks are also expected to elevate Xi allies and loyalists.

Holly Snape, an expert in Chinese politics at the University of Glasgow, said the speech on Sunday was not surprising, and clearly reflected Xi’s position.

“This report was drafted under Xi’s control and that’s significant,” she said. “It’s a clear continuation and deepening of the Xi leadership’s thinking set out in the 2017 report.”