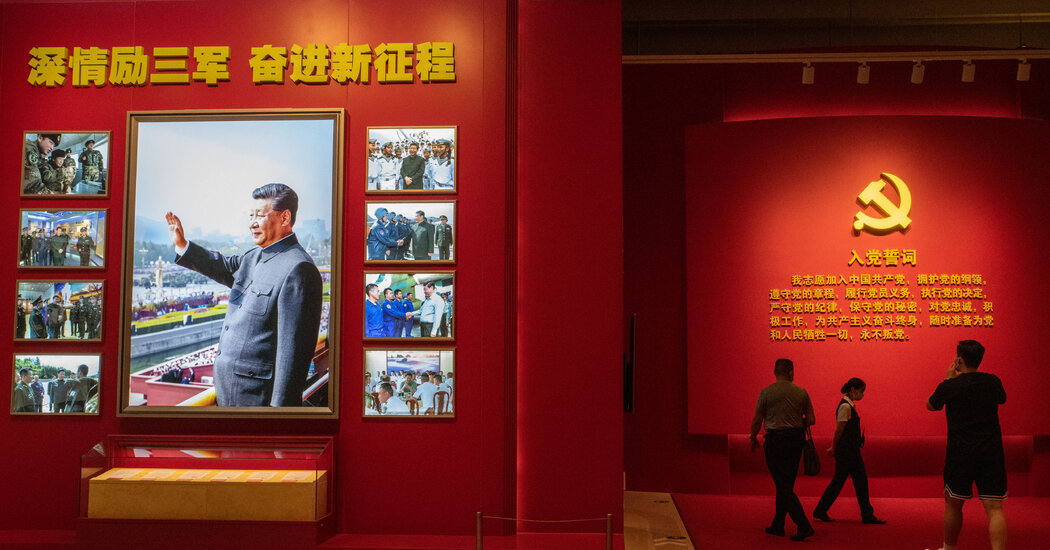 BEIJING — They lounge in folding chairs, perch on traffic bollards or pace small circles to keep warm. They are stationed every 100 feet or so, keeping watch over their designated patch of Beijing street. Their bright red wind-breakers and matching armbands spell out their roles as “Neighborhood Security Volunteers.”

Their mission is straightforward: guarantee that nothing disrupts an all-important Chinese Communist Party congress that begins Sunday, where the top leader, Xi Jinping, is expected to claim a third term.

The volunteers, who have blanketed Beijing in recent days, are perhaps the most obvious element of the security blockade that China has imposed on the city. In a country where control is paramount, every preparation is designed to ensure that any perceived threat or wrinkle — from the coronavirus to unsightly litter — is eliminated.

The authorities have also blocked anyone who has traveled to an area with even one coronavirus infection from entering the city. Postal officials must check the identification documents of everyone mailing anything to Beijing.

Local officials have pledged that the volunteers, working alongside militia members and security officers, will sniff out “unstable elements,” such as people with complaints against the government, and “weave a tight and three-dimensional web of social prevention and control.”

“Until the big meeting is over, there will be more people patrolling. Police, all kinds,” one volunteer in her 50s, Li Wenge, said as she hunched on a stool near Beijing’s 13th-century Drum Tower, watching a group of middle-aged men play roller hockey.

Ms. Li motioned to her right, where two red-clad figures sat at the tower’s foot, then her left, as another pair strolled by. “We’re all over this place.”

The meeting, officially called the 20th National Congress, is a secretive, once-every-five-years conclave where the country’s next leaders are anointed. During his 10 years in power, Mr. Xi has consolidated authority more completely than any Chinese leader since Mao Zedong. He has largely wiped out independent civil society, imprisoned human rights lawyers and expanded state surveillance into evermore corners of daily life.

The fortress around Beijing as he prepares for a precedent-defying five more years crystallizes how successful he has been.

Officials in other provinces have pledged any necessary measures, including lockdowns, to prevent the spread of the coronavirus, “especially to Beijing.” In the capital, armed officers patrol the streets around the Great Hall of the People, where Mr. Xi is set to speak on Sunday, and stop bicyclists and pedestrians for random checks.

An official with the Ministry of Public Security announced at a news conference last month that the authorities had arrested more than 1.4 million criminal suspects nationwide since the end of June, helping to “create a safe and stable political and social environment for the successful convening of the 20th Party Congress.”

All but the most effusive sentiment about the government must be kept at bay, too — hence the profusion of propaganda that has appeared on bridges, on billboards, in 60-foot-tall flower arrangements. The longer the slogan, the more inspiring, the thinking seems to go. “Unite More Closely Around the Party’s Central Committee That Has Comrade Xi Jinping As Its Core, Take Practical Steps to Welcome the Successful Convening of the 20th National Congress,” reads one mega-screen above a department store.

Discontent may still seethe below the surface. On Thursday, it appeared to spill over, as photos circulated on social media of two banners unfurled on a Beijing overpass, calling for an end to coronavirus lockdowns and the overthrow of Mr. Xi.

Public protest — especially directly attacking Mr. Xi — is virtually unseen in the city on any day, and nearly unimaginable amid the pre-congress security thicket. The authorities quickly moved to quash it. Police officers descended on the bridge, and online censors scrubbed the photos from Chinese social media. Even a search for the word “Beijing” seemed to have been restricted on the platform Weibo, with only posts from verified official accounts appearing.

But that outburst was an exception. The paradox of politics in China is that, despite the ubiquity of propaganda, few people publicly discuss the subject. Even as banners urge residents to overflow with joy at the congress’s arrival, hardly anyone talks about the content of the meeting itself and what it might mean for the country’s future. Such questions are considered too sensitive, or simply too far from ordinary people’s control.

Still, seemingly everyone is talking about the meeting for a different reason: how disruptive it has been to daily life.

At coffee shops, friends complain that their employers barred them from leaving Beijing during the seven-day National Day vacation last week — usually one of China’s busiest travel seasons — for fear that they would not be able to return.

Walking down the street, passers-by grouse about being ordered to do extra coronavirus tests. Police officers have abruptly shut down nightclubs and restaurants, at times indefinitely, citing the need to be extra vigilant against the coronavirus.

The words “party congress” have become a sort of catchall explanation for any inconvenience or interruption.

“Some small things will remind you. Your packages don’t come, and then you’ll remember, ‘The party congress is coming,’” Chen Yaran, a college student in Beijing, said.

Ms. Chen was resting in a courtyard of the 300-year-old Lama Temple, an elegant Tibetan-style monastery and one of Beijing’s most popular tourist sites, on the last day of the holiday. Her university, like many others in the city, had shortened the break to discourage students from leaving the city. Unable to go home to see her grandmother, Ms. Chen had settled for a visit to the temple, where she joined dozens of others in lighting bundles of incense and wishing for better days.

Movement in and out of Beijing has been regulated since the pandemic began. But the authorities tightened restrictions even more as the congress neared.

Current rules dictate that anyone who has spent time in an area with a single Covid infection cannot access their Beijing health code, a mobile app that all passengers must show before boarding planes or trains to the capital. Instead, such travelers opening the app are greeted by a warning telling them to stay in an infection-free place for one week.

As the holiday week wound down, Chinese social media erupted with people complaining that they had received such warnings. China is recording a new surge in cases, but many stranded users said they had not traveled to risky areas. So many people shared angry or exasperated posts — some saying they needed to return urgently for work or surgery — that a hashtag about the pop-up was censored on Weibo.

“Incredible: Entering China from abroad and entering Beijing are equally difficult,” Ze Pingzhou, a comedian stuck in the southern city of Shenzhen, wrote on Weibo.

Officials have not released updated statistics for the holiday week, but state media predicted beforehand that fewer than 300,000 passengers would pass through Beijing Capital International Airport during that period — less than a third of the number the year before.

There is perhaps one phrase that has been repeated more often than “party congress”: “after the party congress.”

Residents recite it like an incantation, reassuring others — or themselves — that things will improve. The organizer of a dance show said the performance would pause in October but most likely restart afterward. Owners of shuttered bars look to the end of the month for hope of reopening.

Other postponements are more explicitly political. University professors say they cannot meet foreign reporters, even for informal conversations, until after the congress. Human rights lawyers expect the minders posted outside their homes to leave then.

Even those eager to participate in party congress fervor may find themselves hampered temporarily by the careful choreography the meeting has brought.

Two weeks ago, Mr. Xi toured an exhibit erected in honor of the congress at the Beijing Exhibition Center, called “Bravely Advancing Toward a New Era.” The display, according to glowing state media reports, showed the achievements of Mr. Xi’s decade in power and included items as disparate as an air quality map and Olympic mascots. One report declared that the exhibit had become a popular online “check-in” spot.

But at the entrance to the exhibit, a security guard said it was open only to select groups. Asked when the public could visit, he shrugged.

“I’d guess after the party congress,” he said.