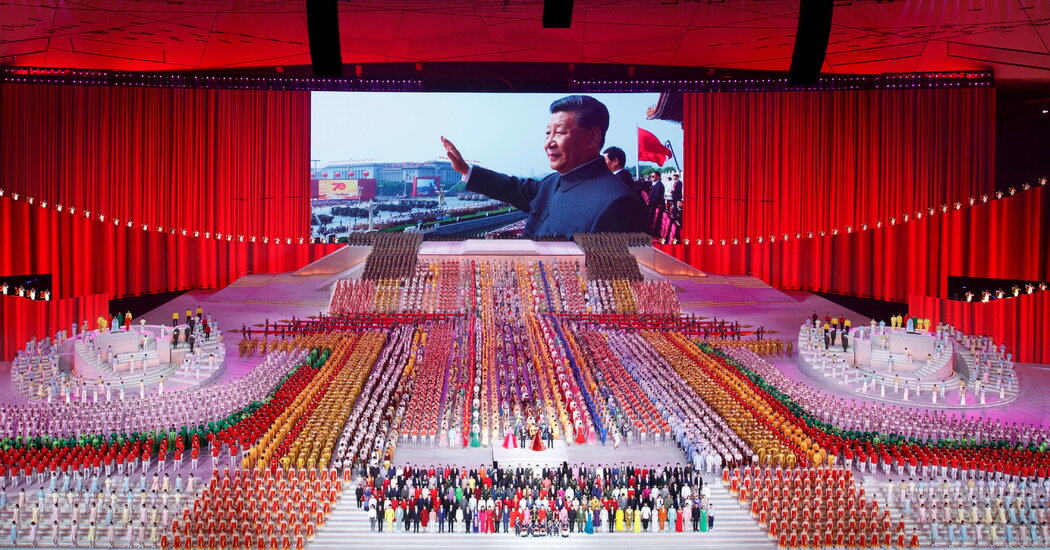 In his first years as China’s leader, Xi Jinping paid for his own steamed dumplings in a cheap diner, casually rolled up his trouser legs to avoid splashes in the rain, and was serenaded with sugary pop tunes. His image-makers cast him as “Xi Dada,” the people’s firm but genial “Uncle Xi.”

How vastly different now. A decade on, Mr. Xi looms over the country like a stern Communist monarch, reflecting on China’s fallen ancient dynasties and determined to win its lasting ascendancy in a turbulent world.

A Communist Party congress opening Sunday is shaping up to be Mr. Xi’s imperial moment, strengthening and extending his rule, while also intensifying the long-term hazards from his singular dominance. At the meeting in Beijing, he seems sure of winning a third term as the party’s general secretary, breaking with recent expectations that Chinese leaders would reign for around a decade.

“The certainty will really only be in the arrangements at the topmost level, that his power is beyond challenge, but beneath that we’ll face a great many uncertainties,” Wu Qiang, a political analyst in Beijing, said in an interview.

The evolution of Mr. Xi’s public face has paralleled his transformation of China into a proudly authoritarian state, scornful of criticism from Washington, increasingly sure that Western democracy has lost its allure, and impatient for a bigger say in shaping the 21st-century global order.

The party congress will be Mr. Xi’s stage to demonstrate that he remains undaunted, despite the recent economic malaise, Covid outbreaks and increasing animosity with the United States, which has labeled China a national security threat. He is likely to tell the 2,296 congress delegates that his government has saved many lives through its strict “zero Covid” policy; shifted the economy onto a path of cleaner, fairer and more efficient growth; raised China’s international standing; and made big strides in military modernization.

“He wants to show that he’s determined to do big things,” said Neil Thomas, an analyst of Chinese politics for the Eurasia Group. “He sees his historical role as breaking the historical cycle of dynastic rise and fall so the Communist Party remains in power pretty much forever.”

Mr. Xi, 69, presents himself as the history-steeped guardian of China’s destiny. He cites the toppling of China’s ancient empires, determined to ensure that it does not again fall prey to political decay, revolt or foreign aggression. He quotes advice to emperors on ensuring obedience, “like the arm commands the finger.”

He has taken to using a grand, ancient-sounding Chinese motto, guo zhi da zhe: roughly meaning “the nation’s great cause.” It sounds like it could have been passed down from a sage; in fact, Mr. Xi or his advisers minted it in 2020.

Mr. Xi is already looking well beyond the next five years, trying to build a lasting edifice of power and policies. He is fleshing out his own creed and promoting cohorts of younger protégés, technocrats and military commanders who may advance his influence for decades. Entrenching his central status was of “decisive significance” for China’s rise, said a gathering of senior officials preparing for the congress.

“Xi Jinping wants to show that he isn’t just a party leader but also almost a spiritual seer for China — a bold, visionary statesman,” said Feng Chongyi, an associate professor at the University of Technology Sydney who studies recent Chinese political history.

Surrounded by deferential functionaries, Mr. Xi may become more prone to swaggering oversteps. Unanswered questions over how long he will stay in power, and when he will name a successor, could unsettle officials, investors and other governments. Most experts believe he will not assign an heir at this congress, wary of undercutting his authority.

If China’s growth continues to stumble, Mr. Xi may have less largess for big technological programs and marquee projects like Xiong’an, an unfinished city of neat boulevards and office blocks outside of Beijing whose design exemplifies his ideas of an orderly, advanced society. It will also add to strains on his economic agenda, which has prioritized the state’s interests to the frustration of private investors.

“We’re still not in an era where the economy and society totally obey him,” Mr. Wu said. “The strains and tensions between politics and economics in the next five years will be more serious than the previous decade.”

One day after Mr. Xi was first appointed party leader in November 2012, dozens of professors, lawyers and retired officials gathered in a Beijing hotel, urging China’s new government to take up political liberalization as a cure for corruption and abuses. “Democracy, rule of law, human rights and constitutional government are the unstoppable global tide,” their petition said.

After decades climbing the administrative ladder in brashly commercial coastal areas, Mr. Xi took power amid widespread expectations that he would be a pragmatist willing to tolerate, if not act on, such calls. Many pointed to the probable influence of his father, an official who served under Deng Xiaoping as the country was embarking on market reforms and opening up in the 1980s.

“Those retired liberal cadres began to think, ‘He’s really not going to be one of us’,” said Professor Feng, the Sydney academic, who was in Beijing when Mr. Xi’s comments spread.

Five months later, Mr. Xi issued an edict condemning human rights and rule of law, which he deemed to be vehicles for Western-backed subversion. Step by step since, he has silenced dissent and erected a pervasive national security apparatus to defend the party and himself.

Ten years on, the Beijing magazine that organized the 2012 meeting has been purged. Many older officials who signed the petition have since died; a businessman who put his name to it was imprisoned; other attendees have retreated into silence or embraced Mr. Xi’s agenda.

In Mr. Xi’s worldview, the party is the custodian of traditional Chinese hierarchy and discipline, set against the dysfunction of democracies. He argues that the party’s centralized power can mobilize China to accomplish feats beyond the grasp of Western countries, like cutting rural poverty, leaping into new technologies, or — so it seemed for a while — efficiently halting the spread of Covid.

“The superiority of our political system and system of governance is even more blazingly clear in its response to the Covid pandemic and winning the war on poverty,” Mr. Xi said in March. “The contrast between Chinese order and Western chaos has become even sharper.”

Several months later, by the time Mr. Xi called together hundreds of officials to hear plans for the congress, the public mood in China had shifted markedly.

The government’s severe measures against incessant outbreaks have fed rising frustration. China’s economy has been caught in a painful slowdown, brought on by the pandemic restrictions and by steps to rein in big tech firms and debt-heavy developers. And Mr. Xi’s fellow strongman, Vladimir V. Putin, has been mired in the floundering Ukraine invasion, forcing Beijing into diplomatic contortions.

Mr. Xi was unbowed. He told the assembled officials that China had to focus on steeling itself for an increasingly turbulent world. It was another instance of how he has turned a potential liability — China’s mood of embattled vulnerability — into a foundation for hard-line policies, and an instrument to marshal obedience.

“In the midst of struggle, we have been defending national dignity and core interests,” Mr. Xi told the officials, shown vigorously applauding him.

Mr. Xi rarely singles out the United States by name, but his warnings are clear enough. Rifts with the Trump and Biden administrations over technology sales, human rights and Taiwan appear to have hardened his distrust of Western intentions.

President Biden’s new national security strategy is likely to intensify Beijing’s wariness. In it, Mr. Biden called China “the only country with both the intent to reshape the international order and, increasingly, the economic, diplomatic, military and technological power to advance that objective.”

Mr. Xi has previously said that “time and momentum” are on China’s side, and called the United States the “biggest source of chaos in the present-day world.”

As the congress has neared, senior Chinese officials have garlanded Mr. Xi, the “core” leader, in vows of utter loyalty. “Embrace the core with a sincere heart,” said one. “At all times and in all circumstances, trust the core, be loyal to the core, defend the core,” said another.

But Mr. Xi will need more than loyalty oaths to achieve his goals. His ambitions to build China into a technological titan are bringing to the fore a new breed of Chinese technocrats: scientists and engineers who have made their mark on projects like the space program.

“We must demonstrate the clear superiority of our country’s socialist system in being able to concentrate forces to achieve big feats,” Mr. Xi said at a meeting on technological innovation last month.

Mr. Xi’s promotions into the Politburo — the council of 25 top officials — could include several officials emerging from the aeronautics and other cutting-edge sectors. Some already steer economic powerhouse provinces, including Zhang Qingwei in Hunan, and Yuan Jiajun, the secretary of Zhejiang, who directed China’s Shenzhou manned spaceflight program.

“Given the challenges of the Chinese economy and a less hospitable external environment, technocrat leaders will likely be leaned on even more,” said Damien Ma, managing director of MacroPolo, an institute that studies China.

None of the rising officials appears positioned to soon emerge as Mr. Xi’s heir apparent. There are no formal limits on how long he may rule, and his hold on power may weaken only if China suffers a profound crisis.

Mr. Wu, the analyst in Beijing, likened Mr. Xi’s predominance to “garbage time” in a basketball game: when the score is so lopsided that changes in the team in the final stretch make little difference.

“Other players may leave the court, and others may go on and even score a beautiful three-pointer, and everyone will cheer,” he said. “But it won’t affect the outcome.”