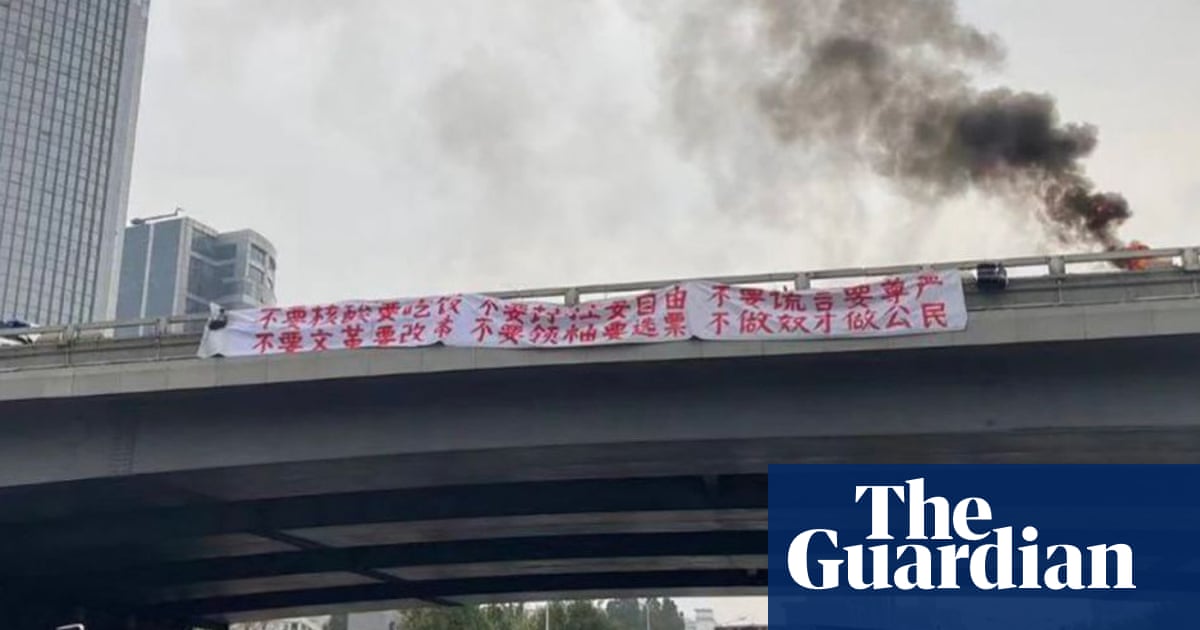 Chinese authorities have strictly censored discussion of a rare protest in Beijing on Thursday that saw large banners unfurled on a flyover calling for boycotts and the removal of Xi Jinping, just days before China’s most important event of its five-year political cycle.

Photos and videos of the protest on the Sitong bridge emerged on social media on Thursday afternoon, also showing plumes of smoke billowing from the bridge over a major thoroughfare in the Haidian district of the capital.

“We want food, not PCR tests. We want freedom, not lockdowns. We want respect, not lies. We want reform, not a Cultural Revolution. We want a vote, not a leader. We want to be citizens, not slaves,” said one banner, while a second called for a boycott of schools, strikes and the removal of Xi.

The photos spread quickly on western social media but were quickly removed from platforms behind China’s internet “Great Firewall”. Posts containing the words “Beijing”, “bridge”, or “Haidian” were strictly controlled, and a song that shared the name of the bridge was taken down from streaming services, according to the Associated Press.

On Twitter some users said their accounts had been temporarily disabled on another major Chinese platform, WeChat, after they shared photos of the protest.

However, such a rare protest at a time of extreme political sensitivity caught attention. On Friday morning a Weibo hashtag “I saw it”, where people referenced the incident without referring to it, had been viewed more than 180,000 times before it too was deleted, and some posters had their accounts suspended for violating Weibo rules and regulations.

A reply asking what the hashtag referred to was answered by a user saying “go search on Twitter, sister, if you search for a certain capital, you can find everything”.

Other commenters referenced the Les Miserables song Do you hear the people sing?, which was briefly censored in 2019 after it became a popular protest song in Hong Kong.

Many comments alluded to a revolutionary saying made famous by Mao Zedong: “A tiny spark can set the prairie ablaze.”

“#Seem suddenly less anxious# when I saw someone acted like a moth putting out a fire and sacrificing his life for righteousness,” one of them added to the Maoist metaphor.

“One makes matters worse by attempting a cover-up,” added another.

Some internet users claimed to have identified the protester, including the Chinese dissident and former CCP insider Cai Xia, who posted screenshots on her Twitter purporting to be days-old deleted tweets from the protester. Others shared photos purported to be of the protester on the bridge, disguised in a construction helmet and shirt.

Fang Zhouzi, a US-based Chinese science writer, said the same slogans displayed on the bridge had days earlier been posted to his ResearchGate account by the man believed to be the protester. Fang said the posts had since been deleted, speculating police had done it after arresting him.

“It’s good to know your identity, at least it won’t be evaporated from the world,” he said.

Such an overt and publicised protest against Xi specifically would be significant at the best of times, but this occurred just days out from the ruling Communist party congress. Thousands of political delegates have descended on Beijing for a week of closed-door meetings and highly choreographed political talks that are expected to reappoint Xi for a precedent-breaking third term and further cement his power as China’s authoritarian leader.

The actual protest appeared to be swiftly quashed on Thursday afternoon. Not long after the photos appeared online, there were no banners hanging from the roadway. A circular black scar was visible on the shoulder area where the fire would have been, and there was a heavy police presence, according to reporters on the scene.

Officers entered stores, and stopped pedestrians for questioning. Associated Press journalists were questioned three times and asked to produce identification. Police denied anything unusual had happened in the area.