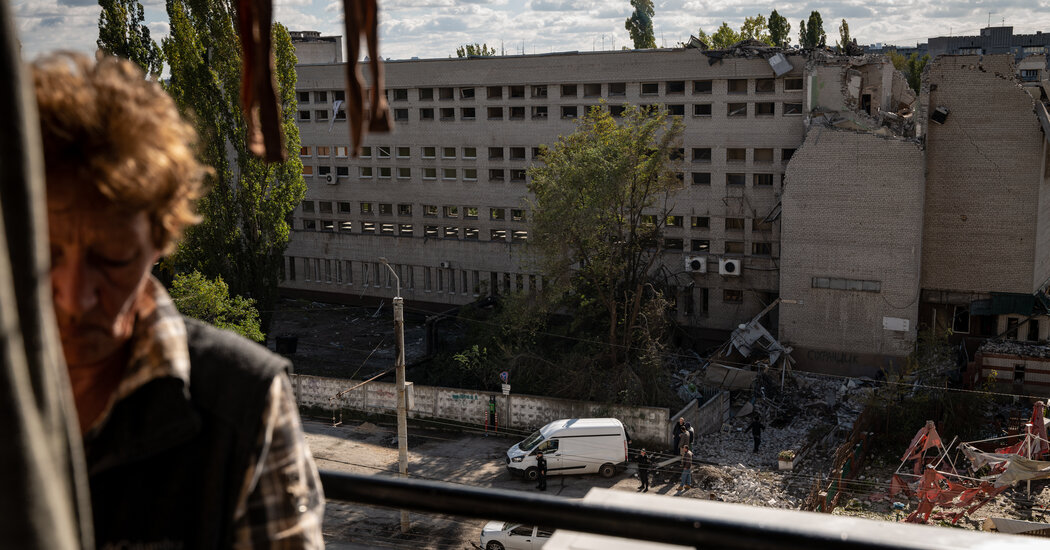 A day after more than 80 missiles pummeled Ukraine, killing at least 19 people, President Volodymyr Zelensky asked the Group of 7 nations at an emergency virtual meeting to help his country defend its airspace.

Zelensky asked for antimissile systems, or at least financing for them. “When Ukraine receives a sufficient number of modern and effective air defense systems,” he said, “the key element of Russian terror — missile strikes — will cease to work.”

The G7 leaders pledged “undeterred and steadfast” military and financial support for Ukraine, and warned of “severe consequences” if Russia were to use nuclear, biological or chemical weapons. Separately, NATO’s secretary-general asserted that Russia was “failing” in the war and urged allies to provide Ukraine with more weapons.

The latest: Ukraine’s military said that Russia had fired 28 cruise missiles on Ukrainian territory by midday Tuesday, but that Ukraine’s air defenses had downed 20 of them. A dozen rockets struck the embattled city of Zaporizhzhia, killing at least seven people and hitting a school and a medical facility.

As Xi prepares to claim a groundbreaking third term in power, he has effectively appointed himself China’s historian in chief, crafting a story — retold in museums, on television shows and in journals — that casts his authoritarian agenda as a fulfillment of ancient values.

The State of the War

Appeals to the motherland have long been a part of the Communist Party’s tool kit, but Xi has taken the approach to new heights, calling for a unified “community of Chinese nationhood” as a bulwark against internal divisions and threats from the West.

Details: The government has increased funding for historical and archaeological research, but it comes with pressure for researchers’ findings to reflect the official narrative. Under Xi, schools have increasingly demanded that pupils be educated almost exclusively in Chinese, rather than in local languages. And nation-building spectacles — grandiose, often far-fetched recreations of ancient rituals — have grown more elaborate and more prominent across China.

Context: At a time when the U.S., Russia, India and other countries have experienced their own resurgent nationalism, Xi’s vision is aimed at inoculating China against unwelcome influences, especially from the West.

Criticism: At its extreme, Xi’s insistence on a singular Chinese identity has led to accusations of cultural genocide from other countries and scholars, who cite the mass detention of Uyghurs and other largely Muslim groups in Xinjiang.

The prediction was published as the world’s top economic officials traveled to Washington for the annual meeting of the World Bank and the I.M.F. It comes as supply chain disruptions and the war in Ukraine have led to surging food and energy prices, forcing central bankers to raise interest rates.

Quotable: “We’re expecting about a third of the global economy to be in a technical recession,” Pierre-Olivier Gourinchas, the I.M.F.’s chief economist, said in an interview.

A blizzard of research in the last decade on black holes has revealed unexpected connections between divergent views of the universe. “The implications are mind-bending, including the possibility that our three-dimensional universe — and we ourselves — may be holograms, like the ghostly anti-counterfeiting images that appear on some credit cards and drivers licenses,” writes Dennis Overbye, The Times’s cosmic affairs correspondent.

The actress Angela Lansbury captivated Hollywood in her youth, became a Broadway musical sensation in middle age and then drew millions of fans as a widowed mystery writer on the long-running television series “Murder, She Wrote.”

A game of inches

Amari Cooper, the Cleveland Browns wide receiver, had Cincinnati Bengals cornerback Chidobe Awuzie on his heels. But leaning on his insider scouting report, Awuzie found his footing and countered.

Fitzgerald, who has become an unofficial ambassador for chess in the N.F.L., said he played in the summer tournament to “help with the negative stigma football players have — they’re not intelligent, not thinkers, they’re barbarians.”

The athletes say the matches offer them deep contemplation away from their fast-paced profession. In some cases, they think chess helps them on the gridiron. “It teaches me to be intentional about every snap, about everything,” Cooper said.