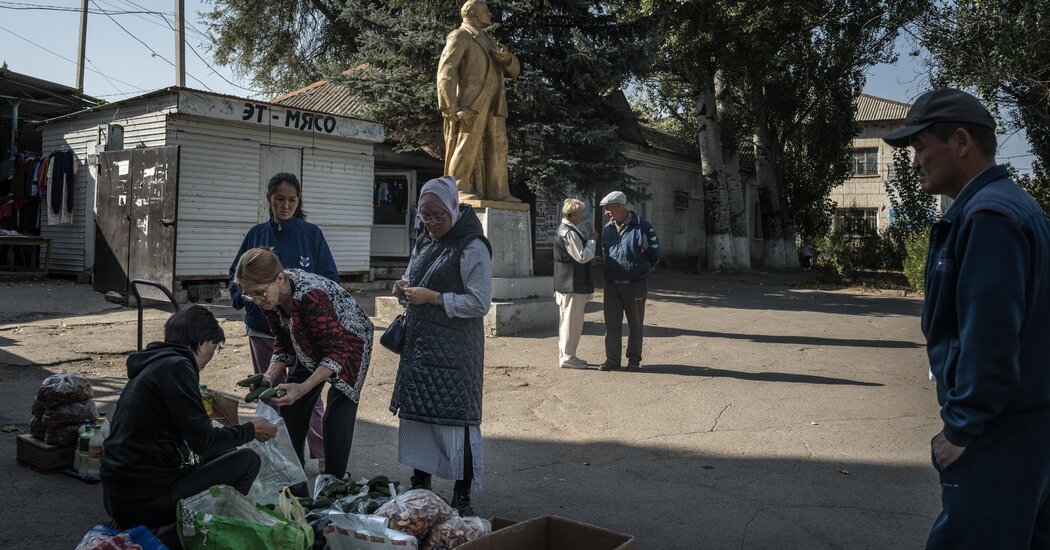 With the Kremlin distracted by its flagging war more than 1,500 miles away in Ukraine, Russia’s dominium over its old Soviet empire shows signs of unraveling. Moscow has lost its aura and its grip, creating a disorderly vacuum that previously obedient former Soviet satraps, as well as China, are moving to fill.

On the mountain-flanked steppes of southwestern Kyrgyzstan, the result in just one remote village has been devastating: homes reduced to rubble, a burned-out school and a gut-wrenching stench emanating from the rotting carcasses of 24,000 dead chickens.

All fell victim last month to the worst violence to hit the area since the 1991 collapse of the Soviet Union — a brief but bloody border conflict between Kyrgyzstan and Tajikistan, both members of a Russia-led military alliance dedicated to preserving peace but which did nothing to halt the mayhem.

“Of course, they are distracted by Ukraine,” Kyrgyzstan’s president, Sadyr Japarov, lamented in an interview in Bishkek, the Kyrgz capital.

Before President Vladimir V. Putin invaded Ukraine in February, Russia played an outsize role in the affairs of Central Asia and also the volatile Caucasus region, in what had passed for a far-flung Pax Russica. In January, it rushed troops to Kazakhstan to help the government there calm a wave of violent domestic unrest. In 2020, it sent around 2,000 armed “peacekeepers” to the Caucasus to enforce a Moscow-mediated truce between Armenia and Azerbaijan.

Today, Armenia is fuming. Its president, Nikol Pashinyan, who has been a close ally, appealed to Moscow in vain last month for help to halt renewed attacks by Azerbaijan. Furious at Russia’s inaction, Armenia is now threatening to leave Moscow’s military alliance, the Collective Security Treaty Organization.

The Kazakh government that Mr. Putin helped prop up in January is veering far from the Kremlin’s script over Ukraine, and is looking to China for help in securing its own territory, parts of which are inhabited largely by ethnic Russians, and which Russian nationalists view as belonging to Russia.

And here along the mountainous border between Kyrgyzstan and Tajikistan, long-running quarrels between farmers over land, water and smuggled contraband escalated last month into a full-scale conflict involving tanks, helicopters and rockets, as the armies of the two countries fought each other to a standstill.

The conflict, according to Kyrgyz officials, killed scores of civilians and drove more than 140,000 people from their homes. It also left many local residents and officials in Bishkek, the capital of Kyrgyzstan, asking why Moscow — long seen as an attentive guardian of stability on the volatile fringes of the former Soviet empire — had barely lifted a finger.

“Russia could have stopped all this in a second. But it did nothing. Why did it let this happen?” asked Zaynaddin Dubanaev, a 75-year-old Russian-language teacher at the burned-out school in Ak-Sai, a Kyrgyz village next to a fenced-off patch of Tajik territory.

Moscow’s security alliance has long been touted by Mr. Putin as Russia’s answer to NATO and an anchor of its role as the dominant (and often domineering) force across vast swaths of the former Soviet Union. But now the bloc is barely functioning. Five of its six members — Armenia, Belarus, Russia, Tajikistan and Kyrgyzstan — have been involved in wars this year, while the sixth, Kazakhstan, has seen violent internal strife.

In response, China is newly asserting itself, while the United States also sees an opening, pressing Kyrgyzstan to sign a new bilateral cooperation agreement. It would replace one scrapped in 2014 after Russian pressure forced the closure of an American air base outside Bishkek that had been set up to fuel warplanes flying over Afghanistan.

“Until Ukraine, China and Russia were not interested in open competition in Central Asia,” said Asel Doolotkeldieva, a senior lecturer at the OSCE Academy in Bishkek, a center for postgraduate studies focused on security issues. “There was a tacit division of labor: security for Russia, economics for China. But Russia is not doing its job anymore. It has shown that it is unable, or unwilling, to protect the region.”

Russia still has tremendous leverage in Central Asia. Its biggest foreign military base is in Tajikistan, and it has a small air base in Kyrgyzstan, a poor, remote country that remains heavily dependent on Russian energy supplies and remittances from more than a million Kyrgyz migrant workers in Russia.

President Japarov, aware of his country’s vulnerability, has stalled on signing the new agreement with the United States. Doing that would be perceived in Moscow as a “stab in the back and they would be right,” he said.

“Russia is obviously focused on other things right now, not Central Asia, but the moment it wants to lay down the law, it just has to hint that it will make life difficult for migrant workers in Russia,” said Peter Leonard, Central Asia editor for Eurasianet, a media outlet that reports on the region.

But the recent border war between Kyrgyzstan and Tajikistan unsettled longstanding assumptions about Russian power. It erupted just as Mr. Putin was in neighboring Uzbekistan for a summit meeting of a Chinese-sponsored regional grouping, the Shanghai Cooperation Organization, which was attended by President Xi Jinping of China, as well as leaders of India, Turkey, Azerbaijan and four Central Asian countries.

Overshadowed by the Chinese leader, Mr. Putin endured a series of humiliating protocol snafus that left him waiting awkwardly in front of the cameras as other leaders, including President Sadyr Japarov of Kyrgyzstan, showed up late to meet him.

“This was of course not deliberate,” Mr. Japarov said. “No slight was intended.”

But widely circulated videos of an uncomfortable-looking Mr. Putin; a public rebuke from the prime minister of India, who stated that “today’s era is not of war”; and an acknowledgment from the Russian leader that China had “questions and concerns” over the war in Ukraine all reinforced an image of shrinking clout and diminished appeal.

“Putin is no longer the great invincible leader that everyone wants to meet,” said Emil Dzhuraev, a researcher in Bishkek with Crossroads Central Asia, a research group. “He has lost his aura.”

By contrast, Mr. Xi has become more assertive. On a visit to Kazakhstan last month, he pledged to “resolutely support Kazakhstan in the defense of its independence, sovereignty and territorial integrity,” a remark widely interpreted as a warning to Moscow not to try anything.

A few days later, after Tajik forces advanced, China issued a similar pledge with respect to Kyrgyzstan, horning in on Russia’s longstanding role as the guardian of Central Asian borders.

China also delivered another affront during the summit meeting by signing an agreement with Kyrgyzstan and Uzbekistan that fixed the route of a proposed new railway line to get Chinese exports to Europe by land without going through Russia.

The massive project, which is expected to cost more than $4 billion and still faces immense obstacles, had long been on hold, largely because China already had rail links to Europe through Kazakhstan and Russia, and did not want to risk Moscow’s wrath by building an alternative that would break its chokehold on land transport across Eurasia.

President Japarov, a nationalist politician who has often spoken of the need to strengthen his country’s sovereignty, said he had “not asked Russia for permission” to build the railway line “and had not been told not to.” He added: “Even if they tell me not to, we will, God willing, still build it.”

Mr. Japarov, the Kyrgyz president, complained that when the border fighting erupted with Tajikistan, Russia’s military alliance “did nothing at all,” adding that the Russians are “taking care of so many problems of their own.”

Some officials in Bishkek wonder if Russia winked at the military action by Tajikistan, a tightly controlled dictatorship ruled by the same leader since 1994, even longer than Mr. Putin has been in control of the Kremlin. Kyrgyzstan, by contrast, is considered the only Central Asian country with a modicum of real democracy and a relatively free press.

The view of Mr. Putin siding with Tajikistan — rather than being an unbiased umpire between two members of his military alliance — gained more ground this past week when the Kremlin declared that it was giving the veteran Tajik dictator, Emomali Rahmon, a prestigious state award for his contribution to “regional stability and security.”

Kyrgyzstan’s foreign ministry said the award, announced by Moscow “while the blood of innocent victims has not yet cooled on Kyrgyz soil,” had caused “bewilderment.”

In Batken, the southwestern region of Kyrgyzstan where the border fighting broke out, the rolling steppes, studded with rocky outcrops, sustain a jumble of rival ethnic groups — impoverished farmers and herders who, armed with farm implements, have for decades skirmished sporadically in what they called the “shovel wars.”

But last month this fight quickly became a real war, with shells even landing in the regional capital, Batken city, scores of miles from the disputed border.

Particularly gruesome is the scene in the village of Ak-Sai, where the cages of a large farm are now filled with thousands of dead chickens that apparently died from suffocation when their brick-and-mud coop was set on fire.

The Kyrgyz owner of the business, who stayed behind to guard his chickens, according to local officials, was shot in his office by marauding Tajiks. Feathers and bullet casings litter the ground outside.

“The perverse aspect of this is that both sides are members of the same military alliance of which Russia is in charge,” said Mr. Leonard, the Eurasianet editor. “The days when Russia dictated these countries’ military posture has clearly gone out the window.”

The head of the district administration, Jorobaev Imamalievich, said he was dismayed.

“Russia was silent. It is busy in Ukraine and is not paying attention,” he said. “It is just not here anymore.”