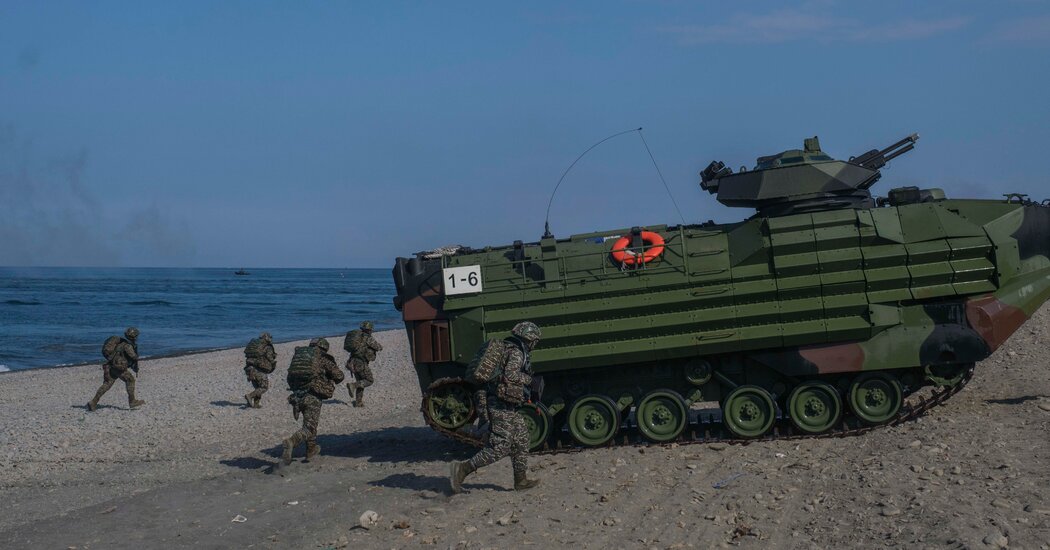 WASHINGTON — American officials are intensifying efforts to build a giant stockpile of weapons in Taiwan after studying recent naval and air force exercises by the Chinese military around the island, according to current and former officials.

The exercises showed that China would probably blockade the island as a prelude to any attempted invasion, and Taiwan would have to hold out on its own until the United States or other nations intervened, if they decided to do that, the current and former officials say.

But the effort to transform Taiwan into a weapons depot faces challenges. The United States and its allies have prioritized sending weapons to Ukraine, which is reducing those countries’ stockpiles, and arms makers are reluctant to open new production lines without a steady stream of long-term orders.

And it is unclear how China might respond if the United States accelerates shipments of weapons to Taiwan, a democratic, self-governing island that Beijing claims is Chinese territory.

U.S. officials are determining the quantity and types of weapons sold to Taiwan by quietly telling Taiwanese officials and American arms makers that they will reject orders for some large systems in favor of a greater number of smaller, more mobile weapons. The Biden administration announced on Sept. 2 that it had approved its sixth weapons package for Taiwan — a $1.1 billion sale that includes 60 Harpoon coastal antiship missiles. U.S. officials are also discussing how to streamline the sale-and-delivery process.

President Biden said last month that the United States is “not encouraging” Taiwan’s independence, adding, “That’s their decision.” Since 1979, Washington has had a policy of reassuring Beijing that it does not support independence. But China’s foreign minister, Wang Yi, said in a speech at the Asia Society last month that the United States was undermining that position “by repeated official exchanges and arms sales, including many offensive weapons.”

The People’s Liberation Army of China carried out exercises in August with naval ships and fighter jets in zones close to Taiwan. It also fired ballistic missiles into the waters off Taiwan’s coast, four of which went over the island, according to Japan.

The Chinese military acted after Nancy Pelosi, speaker of the House, visited Taiwan. But even before that, U.S. and Taiwanese officials had been more closely examining the potential for an invasion because Russia’s assault on Ukraine had made the possibility seem more real, though Chinese leaders have not explicitly stated a timeline for establishing rule over Taiwan.

The United States would not be able to resupply Taiwan as easily as Ukraine because of the lack of ground routes from neighboring countries. The goal now, officials say, is to ensure that Taiwan has enough arms to defend itself until help arrives. Mr. Biden said last month that U.S. troops would defend Taiwan if China were to carry out an “unprecedented attack” on the island — the fourth time he has stated that commitment and a shift from a preference for “strategic ambiguity” on Taiwan among U.S. presidents.

“Stockpiling in Taiwan is a very active point of discussion,” said Jacob Stokes, a fellow at the Center for a New American Security who advised Mr. Biden on Asia policy when he was vice president. “And if you have it, how do you harden it and how do you disperse it so Chinese missiles can’t destroy it?”

“The view is we need to lengthen the amount of time Taiwan can hold out on its own,” he added. “That’s how you avoid China picking the low-hanging fruit of its ‘fait accompli’ strategy — that they’ve won the day before we’ve gotten there, that is assuming we intervene.”

U.S. officials increasingly emphasize Taiwan’s need for smaller, mobile weapons that can be lethal against Chinese warships and jets while being able to evade attacks, which is central to so-called asymmetric warfare.

“Shoot-and-scoot” types of armaments are popular with the Ukrainian military, which has used shoulder-fired Javelin and NLAW antitank guided missiles and Stinger antiaircraft missiles effectively against Russian forces. Recently, the Ukrainians have pummeled Russian troops with mobile American-made rocket launchers known as HIMARS.

To transform Taiwan into a “porcupine,” an entity bristling with armaments that would be costly to attack, American officials have been trying to steer Taiwanese counterparts toward ordering more of those weapons and fewer systems for a conventional ground war like M1 Abrams tanks.

Pentagon and State Department officials have also been speaking regularly about these issues since March with American arms companies, including at an industry conference on Taiwan this week in Richmond, Va. Jedidiah Royal, a Defense Department official, said in a speech there that the Pentagon was helping Taiwan build out systems for “an island defense against an aggressor with conventional overmatch.”

In a recent article, James Timbie, a former State Department official, and James O. Ellis Jr., a retired U.S. Navy admiral, said Taiwan needs “a large number of small things” for distributed defense, and that some of Taiwan’s recent purchases from the United States, including Harpoon and Stinger missiles, fit that bill. Taiwan also produces its own deterrent weapons, including minelayer ships, air defense missile systems and antiship cruise missiles.

They said Taiwan needs to shift resources away from “expensive, high-profile conventional systems” that China can easily destroy in an initial attack, though some of those systems, notably F-16 jets, are useful for countering ongoing Chinese fighter jet and ship activities in “gray zone” airspace and waters. The authors also wrote that “the effective defense of Taiwan” will require stockpiling ammunition, fuel and other supplies, as well as strategic reserves of energy and food.

Officials in the administration of Tsai Ing-wen, the president of Taiwan, say they recognize the need to stockpile smaller weapons but point out that there are significant lags between orders and shipments.

“I think we’re moving in a high degree of consensus in terms of our priorities on the asymmetric strategy, but the speed does have to be accelerated,” Bi-khim Hsiao, the de facto Taiwanese ambassador in Washington, said in an interview.

Some American lawmakers have called for faster and more robust deliveries. Several senior senators are trying to push through the proposed Taiwan Policy Act, which would provide $6.5 billion in security assistance to Taiwan over the next four years and mandate treating the island as if it were a “major non-NATO ally.”

But Jens Stoltenberg, secretary general of the North Atlantic Treaty Organization, said in an interview that weapons makers want to see predictability in orders before committing to building up production. Arms directors from the United States and more than 40 other nations met last week in Brussels to discuss long-term supply and production issues.

If China decides to establish a naval blockade around Taiwan, American officials would probably study which avenue of resupplying Taiwan — by sea or by air — would offer the least likelihood of bringing Chinese and American ships, aircraft and submarines into direct conflict.

One proposition would involve sending U.S. cargo planes with supplies from bases in Japan and Guam to Taiwan’s east coast. That way, any Chinese fighters trying to shoot them down would have to fly over Taiwan and risk being downed by Taiwanese warplanes.

“The sheer amount of materiel that would likely be needed in case of war is formidable, and getting them through would be difficult, though may be doable,” said Eric Wertheim, a defense consultant and author of “The Naval Institute Guide to Combat Fleets of the World.” “The question is: How much risk is China and the White House willing to take in terms of enforcing or breaking through a blockade, respectively, and can it be sustained?”

China has probably studied the strategic failure of Russia’s invasion of Ukraine, he said, and the United States should continue to send the kinds of arms to Taiwan that will make either an amphibious invasion or an attack with long-range weapons much more difficult for China.

“The Chinese naval officers I’ve spoken to in years past have said they fear the humiliation that would result from any kind of failure, and this of course has the effect of them being less likely to take action if there is an increased risk of failure,” Mr. Wertheim said. “In essence, the success the Ukrainians are having is a message to the Chinese.”

Officials in the Biden administration are trying to gauge what moves would deter China without actually provoking greater military action.

Jessica Chen Weiss, a professor of government at Cornell University who worked on China policy this past year in the State Department, wrote on Twitter that Mr. Biden’s recent remarks committing U.S. troops to defending Taiwan were “dangerous.” She said in an interview that pursuing the porcupine strategy enhances deterrence but that taking what she deems symbolic steps on Taiwan’s diplomatic status does not.

“The U.S. has to make clear that the U.S. doesn’t have a strategic interest in having Taiwan being permanently separated from mainland China,” she said.

“President Biden has said now four times that we would defend Taiwan, but each time he says it someone walks it back,” said Harry B. Harris Jr., a retired admiral who served as commander of U.S. Pacific Command and ambassador to South Korea. “And I think that makes us as a nation look weak because who’s running this show? I mean, is it the president or is it his advisers?

“So maybe we should take him at his word,” Admiral Harris added. “Maybe he is serious about defending Taiwan.”