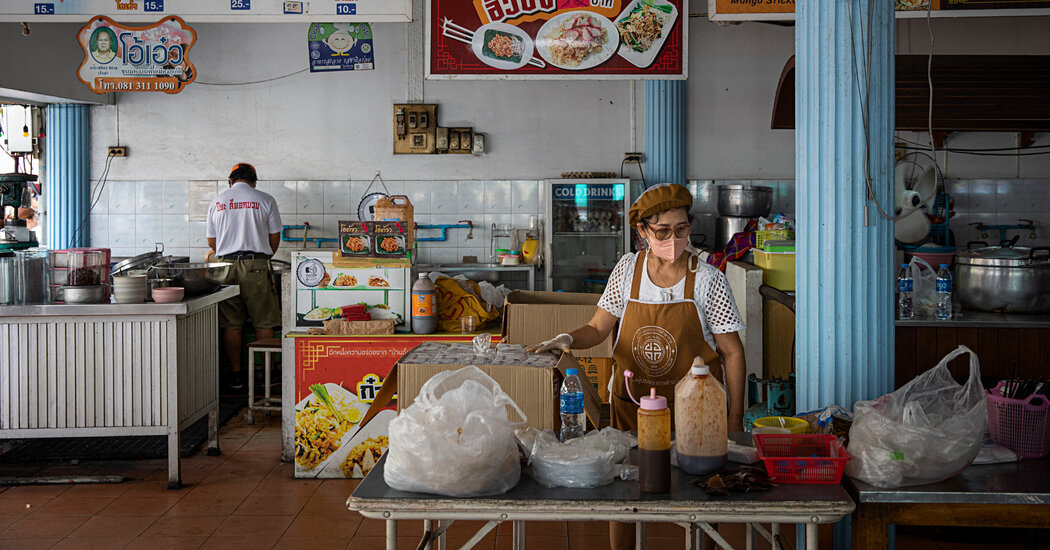 Tigun Wibisana and Sandra Kok, who own the SiTigun cafe on Penang Island in Malaysia, are facing an excruciating decision that could make or break their business of 14 years: Can they increase prices to cover rising expenses without driving customers into the arms of their bigger rivals?

The cost of the coffee beans that the couple, who are married, buy is spiraling because they are traded globally in U.S. dollars, and the Malaysian ringgit has fallen to a 24-year low. Compound that with an inflationary spike in prices for butter and flour, essential ingredients for its pastries, and the shop’s profits have plunged more than 25 percent this year.

“Eventually we may have to raise prices to survive, but I don’t have the guts to do it now,” said Mr. Wibisana, 65, who roasts the beans and makes the baked goods.

SiTigun is one of many businesses in Asia that are being squeezed by the strength of the dollar, which has soared to record levels this year. America’s currency is used extensively to buy and sell goods around the world, and its hypervalue is exacerbating the pain of surging prices for energy and other imports caused by the war in Ukraine and the pandemic.

Throughout Asia, from the Vietnamese dong to the Philippine peso, currencies are tumbling to record lows, the type of widespread currency weakness not seen since the 1997 financial crisis. That has unnerved businesses and policymakers who recall how a string of Asian currencies folded under the pressure of a strong dollar.

To minimize the risk of that kind of calamity, policymakers are scrambling to stabilize their currencies. The State Bank of Vietnam raised interest rates by a full percentage point last month after Prime Minister Pham Minh Chinh implored the central bank to act. The dong had fallen for nine straight days to a 29-year low.

The same day Vietnam raised interest rates, Japan, where the yen has dropped around 25 percent against the dollar this year, announced it would intervene to strengthen its currency for the first time since 1998. In China, where the renminbi is trading near 14-year lows, the central bank has taken a series of measures to slow the currency’s depreciation, including warning speculators against making bets on it.

Heightening the alarm, the dollar — powered by the most rapid Federal Reserve interest rate increases in decades — shows no signs of slowing. It is up nearly 20 percent against a group of major currencies from a year ago.

In Asia, the trouble facing local currencies has resurfaced the collective trauma of 25 years ago, when excitement over the region’s dazzling growth became a crisis seemingly overnight.

The chaos started in Thailand when the country’s central bank ran out of the dollars it was using to keep its own currency stable and back its loans. It quickly spread to South Korea, Indonesia and other countries as they struggled to cushion their falling currencies. Speculators who had charged into the region en masse expecting huge returns retreated just as quickly.

By the end of 1997, the International Monetary Fund had arranged more than $100 billion worth of support for Thailand, Indonesia and South Korea to prevent their financial systems from collapsing. The next year, the economies of the countries at the heart of the crisis retreated sharply: 13.7 percent in Indonesia, 9.7 percent in Thailand, 6.7 percent in Malaysia and 5.8 percent in South Korea. Governments struggled with corporate bankruptcies and political instability.

“It was very insulting, humiliating and devastating, and I think the region will never forget it,” said Hoe Ee Khor, chief economist at ASEAN+3 Macroeconomic Research Office, known as AMRO, a group that supports the Chiang Mai Initiative, an agreement among Asian countries to pool funds to help one another in a cash crisis. “But because of that, they were determined to never let it happen again, and they took the painful medicine to reform.”

Most economists and financial market analysts believe there is little risk that a similar crisis will spread across the region. At least not yet. Asian economies are fundamentally stronger than before, they say, and the painful lessons learned from the meltdown spurred them to build financial systems designed to prevent future collapses.

Countries have undergone several major changes that have made their economies much less susceptible to a strong dollar than they were in the late 1990s. For one thing, they have much less debt borrowed in dollars: The size of local currency bond markets in 10 Southeast Asian countries, plus Japan, China and South Korea, is about 123 percent of their collective gross domestic product, compared with 74 percent in 2000, according to AMRO.

Many Asian central banks that used to keep their exchange rates in line with the greenback now allow them to fluctuate with market forces. While that means more volatile exchange rates, it also relieves some pent-up pressure that can trigger a collapse.

And most Asian countries have more foreign currency coming in than going out, allowing them to sock away significant reserves that they can deploy in an emergency to supplement imports or protect their own currency from depreciating.

As a result, Asia today is “in much better shape than any other region in the world,” said Sayuri Shira, a professor of economics at Keio University and former member of the Bank of Japan’s policy board.

Still, the strong dollar is testing the region’s defenses, forcing central banks to use their war chests to prop up their currencies — mainly by buying their own currencies and selling dollars. India and Thailand have spent more than 10 percent of their reserves on interventions this year, spending $75 billion and $27 billion in the foreign exchange markets, according to estimates from Nomura Holdings.

Companies are having to adapt as falling currencies blow up their supply chains and put pressure on their profits.

Suh Jin, an executive at Mirage Furniture on the outskirts of Seoul, said the company imports $15 million to $20 million worth of home furnishings in an average year. But Mirage Furniture, which buys most of its products from Vietnam with U.S. dollars, has had to cut its imports by 10 percent since May because of the weakening won, which is trading near 13-year lows against the U.S. dollar.

While South Korea was able to emerge from the 1997 financial crisis fairly quickly, Mr. Suh said, he is worried that the company may have to lay off staff if the strong dollar and high inflation persist.

“We fear that the current situation will last longer,” he said.

The strong dollar has affected even businesses that rarely use it.

Classic Japan, a flower importer in Tokyo, had long paid its South East Asian vendors in yen. But sellers hungry for valuable dollars have begun offering their merchandise elsewhere, making it difficult to obtain some rare flowers, such as orchids.

“Domestic production is falling, so we want to import more,” said Kio Nishio, the company’s president. But the current situation has made that difficult, he said.

Some companies, of course, can benefit from a strong dollar, which can lift corporate bottom lines in countries like South Korea that are heavily export focused. In Japan, trading companies and major manufacturers like Toyota that have substantial overseas business have gotten a healthy profit boost from assets and earnings held in dollars.

At the SiTigun cafe in Malaysia, the full impact of the weak ringgit will not be felt until months from now, when the next crop of beans has worked its way through farmers and middlemen to their coffee pots.

“The pandemic has already affected many businesses, and then inflation came as another challenge,” said Ms. Kok, who manages the shop. “But inflation and currency hits everyone. How do we survive?”