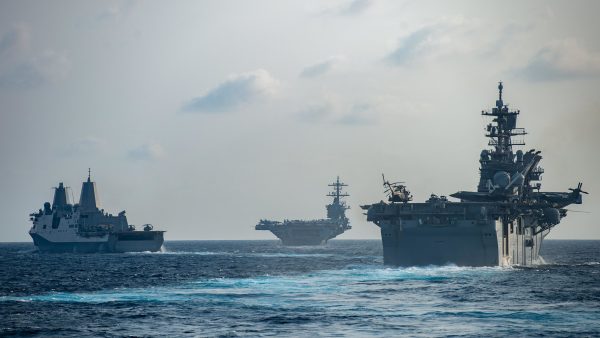 Capability and intent are the two fundamental lenses that can best predict risk and conflict. While there is ample space for misjudgment on the part of two adversaries, capability is much easier to evaluate than intent. In foreign policy, China’s rise has gone through a number of iterations, each marked by a rhetoric of intent and suggestions about its capability.

The 12-character Chinese aphorism quoted by Deng Xiaoping – “Hide your brightness, bide your time” – is long dead. The late Chinese leader was fond of quoting the famous military strategist Sun Tzu, who advocated keeping one’s strengths and capabilities a secret until the appropriate moment. Deng prioritized boosting national incomes and progressing Chinese economic policy first. In 2003, Zheng Bijian, a senior Chinese official, introduced a new concept in Beijing’s foreign policy: the “peaceful rise” (later modified to “peaceful development.”) Finally, Xi Jinping in 2013 expressed the intent for China to become a great power, in part by establishing its maritime dominance in the East and South China Seas. This has already had profound strategic ramifications and put China on a collision course with other regional powers.

The big question is whether China truly intends to realize these ambitions, and whether it has the capability to do so. In this regard, an examination of these two issues in the context of merchant shipping, ports, and seabed cable communications is particularly instructive.

First, China now controls a merchant fleet of more than 5,600 vessels with a capacity of 270 million dead-weight tonnage (dwt), making it the second-largest ship-owning country in the world. According to the Institute of  Shipping Economics and Logistics, China COSCO Shipping is the largest shipping company in the world, and controls over 800 merchant vessels with a combined 74.5 million dwt. By comparison, the numbers for the United States are weak when factoring the restrictions imposed by the Jones Act, a protectionist law passed in 1920, which requires that all goods that are transported by water between U.S. ports be carried by vessels constructed in the United States, flying the U.S. flag, and that are owned and crewed by U.S. citizens and permanent residents. Consequently, this lessens the number of ships available for the U.S. to use in international commerce.


China on the other hand, has undertaken a large merchant shipbuilding program through the Belt and Road Initiative (BRI). Chinese shipbuilding companies are the largest in the world, which include the Jiangnan Shipbuilding Group, a subsidiary of the China State Shipbuilding Corporation (CSSC), a state owned company with $120 billion in assets.

Second, and more worrisome, is that China has constructed, maintains, and operates dozens of ports globally, which give it a dominating advantage. In South Asia, for example, the strategic deep-water port at Hambantota in Sri Lanka was leased to Beijing for 99 years in return for $1.1 billion, to help the Sri Lankan government meet rising foreign debt repayments. Critical ports are a part of China’s “string of pearls” strategy that seeks to create a maritime link between eastern China and the African continent. Worse, Lonnie Henley of the China Maritime Studies Institute argued in May that merchant ships can be weaponized, giving China a logistical advantage in any attempt to invade Taiwan.

Third, a 2021 report by the Washington-based Center for Strategic and International Studies warns that the U.S. position as the world’s leading hub in subsea networks can no longer be taken for granted. Subsea networks are vital as they carry nearly all voice and internet traffic between continents, and while more of the world is becoming digitally connected, China has emerged a leading subsea cable provider. For example, between 2004 and 2019, the U.S. went from handling half of all internet traffic to less than 25 percent, while Xi Jinping has laid plans for a “Digital Silk Road” to place China at the very center of global digital networks.

A newly released report from the French Institute for International Studies on the geopolitics of submarine cables in Oceania, mainly the Pacific Islands nations, noted the growing politicization of the technology internationally. The author, Camille Morel, an associate researcher at the Institute for Strategy and Defense Studies at the University of Lyon, noted that by 2022, the 450 fiber-optic cables that stretch across the world carry as much as 98 percent of international data and are critical to digitally-connected societies. The report highlights China’s use of seabed cables as an instrument of policy and to assert its sovereignty at sea. It uses seabed surveys to identify the best possible route for a cable, allowing China to occupy the space. In June, China reportedly carried out seabed surveys in Japan’s Exclusive Economic Zone, close to the disputed Senkaku/Diaoyu Islands, without Tokyo’s permission.

To counter China’s dominance in the digital sphere, Pacific and international powers need to invest heavily in digital infrastructure. Early efforts include the Trilateral Partnership for Infrastructure Investment in the Indo-Pacific, which was launched in 2018, which called for a fund to counter China’s Chinese East Micronesia Cable project.

Investment came to life in an MoU between Pacific Island states, Japan, the United States, and Australia. The U.S. warned that major telecom providers have been labeled a national security risk, as Article 7 of China’s 2017 National Intelligence Law of the People’s Republic of China states: “All organizations and citizens shall support, assist, and cooperate with national intelligence efforts in accordance with law, and shall protect national intelligence work secrets they are aware of.”

This erases the line between public and private sectors and places controls on tech companies to report material to Chinese security agencies. The threat posed by any tampering with undersea cables is serious, and China’s commitment to expanding its submarine cable network leaves the issue of its intent in a troubling gray area.

The legacy of Deng Xiaoping is certainly mixed. While many would suggest that Mao unified the country (minus Taiwan), Deng made it rich. However, the most problematic and challenging aspect is that meaningful political reform within the CCP was always severely limited. This total failure to undertake a long called-for Fifth Modernization of the country’s politics opened the space for increased authoritarianism and the rise of hegemonic power projection.

China has demonstrated tremendous capability in building economic and military power. There is no dispute that it has risen. But China’s foreign policy assertiveness and the posturing of “wolf warrior diplomacy” have generated serious concerns about China’s intentions – especially at sea. The current international system, constructed by the dominant Western powers, has never allowed a rising power to overtly challenge the rules-based international order. These powers therefore have no choice but to either contain or confront China’s extension of power at sea – whatever its ultimate intentions.