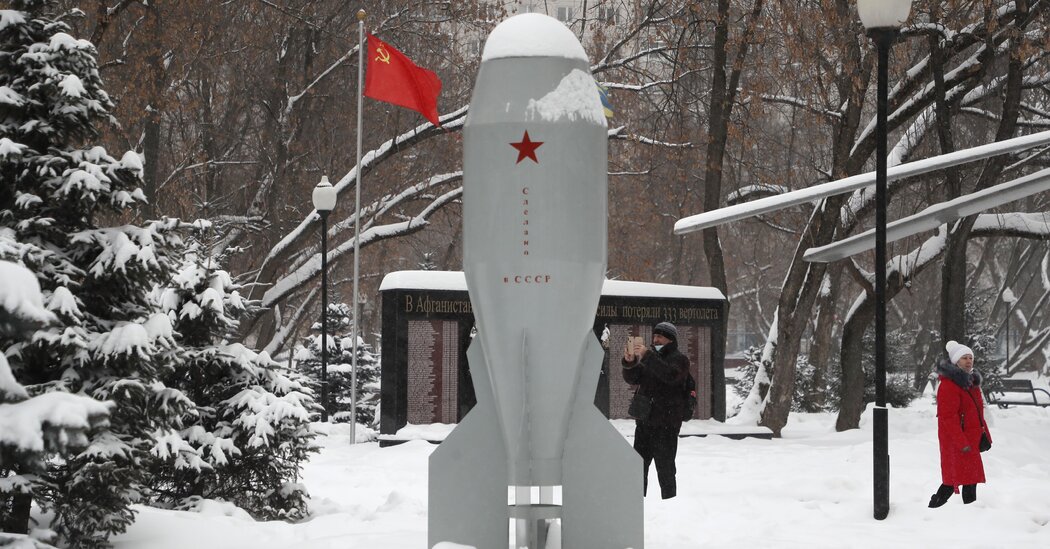 WASHINGTON — The old nuclear order, rooted in the Cold War’s unthinkable outcomes, was fraying before Russia invaded Ukraine. Now, it is giving way to a looming era of disorder unlike any since the beginning of the atomic age.

Russia’s regular reminders over the past three months of its nuclear might, even if largely bluster, were the latest evidence of how the potential threat has resurfaced in more overt and dangerous ways. They were enough to draw a pointed warning to Moscow on Tuesday from President Biden in what amounted to a tacit acknowledgment that the world had entered a period of heightened nuclear risks.

“We currently see no indication that Russia has intent to use nuclear weapons in Ukraine, though Russia’s occasional rhetoric to rattle the nuclear saber is itself dangerous and extremely irresponsible,” Mr. Biden wrote in a guest opinion essay in The New York Times. “Let me be clear: Any use of nuclear weapons in this conflict on any scale would be completely unacceptable to us as well as the rest of the world and would entail severe consequences.”

Those consequences, though, would almost certainly be nonnuclear, officials said — a sharp contrast to the kind of threats of nuclear escalation that Washington and Moscow pursued during the Cold War.

Such shifts extend well beyond Russia and include China’s moves to expand its arsenal, the collapse of any hope that North Korea will limit — much less abandon — its cache of nuclear warheads and the emergence of so-called threshold states, like Iran, which are tantalizingly close to being able to build a bomb.

During the Trump administration, the United States and Russia pulled out of arms treaties that had constrained their arsenals. Only one — New START, which limits both sides to 1,550 deployed strategic weapons — was left in place. Then, as the Ukraine war started in February, talks between Washington and Moscow on what might replace the agreement ended abruptly.

With the Biden administration stepping up the flow of conventional weapons to Ukraine and tensions with Russia high, a senior administration official conceded that “right now it’s almost impossible to imagine” how the talks might resume before the last treaty expires in early 2026.

Last summer, hundreds of new missile silos began appearing in the Chinese desert. The Pentagon declared that Beijing, which had long said it needed only a “minimum deterrent,” was moving to build an arsenal of “at least” 1,000 nuclear arms by 2030.

The commander of United States Strategic Command, the military unit that keeps the nuclear arsenal ready to launch, said last month that he was worried Beijing was learning lessons from Moscow’s threats over Ukraine and would apply them to Taiwan, which it similarly views as a breakaway state.

The Chinese are “watching the war in Ukraine closely and will likely use nuclear coercion to their advantage” in future conflicts, the commander, Adm. Charles A. Richard, told Congress. Beijing’s aim, he said, “is to achieve the military capability to reunify Taiwan by 2027, if not sooner.”

Other administration officials are more skeptical, noting that Russia’s saber rattling failed to deter the West from arming Ukraine — and that the lesson China may take away is that nuclear threats can backfire.

Others are learning their own lessons. North Korea, which President Donald J. Trump boasted he would disarm with one-on-one diplomacy, is building new weapons.

South Korea, which Mr. Biden visited last month, is once again openly debating whether to build a nuclear force to counter the North, a discussion reminiscent of the 1970s, when Washington forced the South to give up a covert bomb program.

In South Korea and beyond, Ukraine’s renunciation of its nuclear arsenal three decades ago is seen by some as a mistake that left it open to invasion.

Iran has rebuilt much of its nuclear infrastructure since President Donald J. Trump abandoned the 2015 nuclear agreements. Reports from the International Atomic Energy Agency suggest that Tehran can now produce the fuel for a nuclear weapon in weeks, though the warhead would take a year or more.

What is fast approaching, experts say, is a second nuclear age full of new dangers and uncertainties, less predictable than during the Cold War, with established restraints giving way to more naked threats to reach for such weapons — and a need for new strategies to keep the atomic peace.

Andrew F. Krepinevich Jr., a senior fellow at the Hudson Institute, argued recently in Foreign Affairs that the dawning era would feature “both a greater risk of a nuclear arms race and heightened incentives for states to resort to nuclear weapons in a crisis.”

President Vladimir V. Putin of Russia opened the Ukraine war with a declaration that he was putting his nuclear abilities on some kind of heightened alert — a clear message to Washington to back off. (There is no evidence that he moved any nuclear weapons or loosened the controls on their use, William J. Burns, the C.I.A. director, said recently.)

It was the latest expression of a Putin strategy to remind the world that even if Russia’s economy is about the size of Italy’s and its influence is eclipsed by China’s rise, its nuclear arsenal remains the largest.

In the years leading up to the Ukraine invasion, Mr. Putin regularly punctuated his speeches with nuclear propaganda videos, including one that showed a swarm of warheads descending on Florida. In March 2018, when he announced the development of a 78-foot-long, nuclear-armed torpedo meant to cross an ocean and blanket an area larger than California with radioactivity, he called it “amazing” and “really fantastic” — as an accompanying video showed it exploding in a gargantuan fireball.

A popular Sunday news show in Russia recently featured an animation that again showcased the giant torpedo, claiming the weapon could explode with a force of up to 100 megatons — more than 6,000 times as powerful as the American atomic bomb that destroyed Hiroshima — and turn Britain “into a radioactive desert.”

It was all a little heavy-handed, even for a bruised Mr. Putin. But inside the Pentagon and the National Security Council, his bluster has focused attention on another part of the Russian arsenal: tactical or “battlefield” weapons, relatively small arms that are not covered by any treaty and are easy to transport. Russia possesses a stockpile of 2,000 or so, 20 times more than NATO’s arsenals.

They are designed by the Russians to blur the distinction between conventional and nuclear weapons, which strategists fear makes their use more thinkable.

In war games and field exercises, Russian troops have simulated the transition from conventional to tactical nuclear weapons as an experiment in scaring off adversaries. In Russian military doctrine, this is called “escalate to de-escalate.”

A sign of the risks of this new age has been a series of urgent meetings in the administration to map out how Mr. Biden should respond if Russia conducts a nuclear detonation in Ukraine or around the Black Sea. Officials will not discuss the classified results of those tabletop exercises.

But in public testimony to Congress last month, Avril D. Haines, the director of national intelligence, said that officials believed Mr. Putin would reach for his arsenal only if “he perceives that he is losing the war in Ukraine, and that NATO in effect is either intervening or about to intervene.”

Intelligence officials say they think the chances are low, but that is higher than what anyone was projecting before the invasion.

“There are a lot of things that he would do in the context of escalation before he would get to nuclear weapons,” Ms. Haines said.

On the ground. Russian troops have stormed the city of Sievierodonetsk in Ukraine’s east and converged in the city center, according to a local official. The fall of Sievierodonetsk would give President Vladimir V. Putin’s forces the last major city in the Luhansk province still in Ukrainian hands.

Russian oil embargo. European Union members finally reached an agreement on a Russian oil embargo and new sanctions against Russia. The long-delayed deal effectively exempts Hungary, which had opposed the embargo, from the costly step the rest of the bloc is taking to punish Russia.

The White House, the Pentagon and the intelligence agencies are examining the implications of any potential Russian claim that it is conducting a nuclear test or the use by its forces of a relatively small, battlefield nuclear weapon to demonstrate its ability.

As Mr. Biden’s opinion article hinted, his advisers are quietly looking almost entirely at nonnuclear responses — most likely a combination of sanctions, diplomatic efforts and, if a military response is needed, conventional strikes — to any such demonstration of nuclear detonation.

The idea would be to “signal immediate de-escalation” followed by international condemnation, said one administration official who spoke on the condition of anonymity to provide insight into classified topics.

“If you respond in kind, you lose the moral high ground and the ability to harness a global coalition,” said Jon B. Wolfsthal, a nuclear expert who was on the National Security Council during the Obama administration.

Mr. Wolfsthal noted that in 2016, the Obama administration ran a war game in which participants agreed that a nonnuclear response to a Russian strike was the best option. Ms. Haines, then President Barack Obama’s deputy national security adviser, ran the simulation.

Scott D. Sagan, a specialist in nuclear strategy at Stanford University’s Center for International Security and Cooperation, called the development of a nonnuclear response an “extremely important” development.

“The response need not be a response in kind,” he said.

But details matter. A test by Russia over the ocean, where no one dies, might be one thing; one in a Ukrainian city that kills people might result in a different response.

Henry Kissinger noted in a recent interview with The Financial Times that “there’s almost no discussion internationally about what would happen if the weapons actually became used.” He added: “We are now living in a totally new era.”

For decades, Beijing was satisfied with having a few hundred nuclear weapons to assure that it could not be attacked — and that it would retain a “second strike” ability in case nuclear weapons were used against it.

When satellite images began showing new intercontinental ballistic missile silos being dug on the edge of the Gobi Desert last year, it set off a debate in the Pentagon and U.S. intelligence agencies about what China’s leader, Xi Jinping, intended, especially at a time when he appeared to be steering toward a confrontation over Taiwan.

The simplest theory is that if China is going to be a superpower, it needs a superpower-sized arsenal. But another is that Beijing recognizes that all the familiar theories of nuclear balance of power are eroding.

“China is heralding a paradigm shift to something much less stable,” Mr. Krepinevich wrote, “a tripolar nuclear system.”

Administration officials say that every time the subject is raised, their Chinese counterparts make clear they will not discuss entering arms control agreements. As a result, they are unclear about Mr. Xi’s intentions. For example, might China extend the protection of its nuclear arsenal over other states it is trying to lure into its orbit?

All this is the subject of a classified study that the Pentagon recently sent to Congress. But so far, none of it has been openly debated.

“Everybody’s scurrying for a nuclear umbrella and, if they can’t get that, thinking about getting their own weapons,” said David Albright, the president of the Institute for Science and International Security, a private group in Washington that tracks the spread of nuclear arms.

He called the Middle East prime territory for further atomic ambitions. As Iran has inched toward a bomb, Saudi Arabia and Turkey have talked publicly about the possibility of matching whatever Tehran does.

“They’re up to something,” Mr. Albright said of Saudi Arabia, “and they’re rich.”