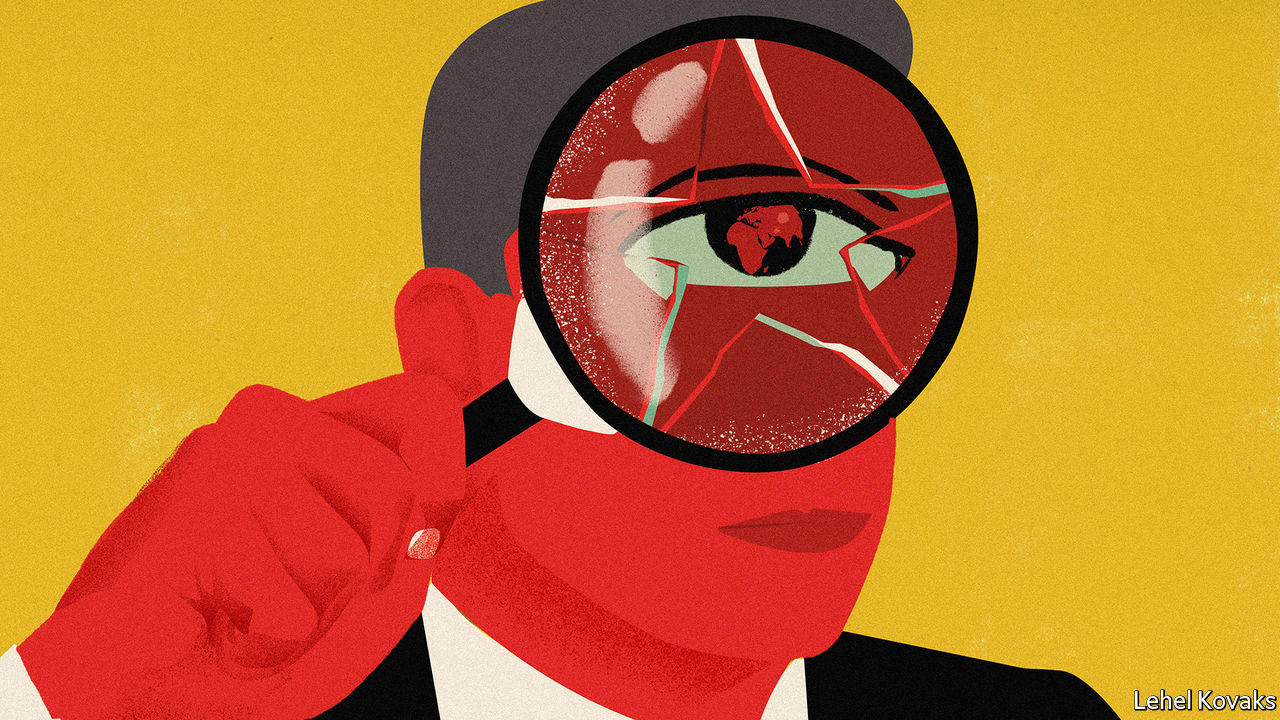 In recent years Western officials have maintained a steady drumbeat of warnings about Chinese spies. In short, the spooks are getting bolder and better. Among other things, they’re accused of hacking into Microsoft’s Exchange email service, stealing Western defence and commercial secrets, harassing Chinese dissidents overseas and bugging the headquarters of the African Union (all of which China denies). Yet, when confronted by overwhelming evidence that Russia was about to invade Ukraine, China’s spies appear to have dropped the ball.

Whatever Vladimir Putin told Xi Jinping when the two presidents met in Beijing on February 4th, China did not seem prepared for Russia’s invasion three weeks later. One giveaway was its failure to make plans to evacuate its citizens in Ukraine. China’s embassy first advised them to stay at home or fix a Chinese flag “on an obvious place on your car”. If Chinese officials had in mind “Wolf Warrior 2”, a nationalistic film in which the hero passes the frontlines of an African conflict by raising a Chinese flag, they were disappointed. China’s parroting of Russian propaganda has not made it popular in Ukraine. Two days later, the embassy retracted its advice, warning citizens: “Don’t show your identity or display identifying symbols.”

Meanwhile, at the United Nations, Chinese diplomats squirmed as their government struggled to formulate a coherent position. China seemed surprised, too, at Ukrainian resistance to Russia and at Western support for Ukraine. In the days after the invasion, Chinese officials quizzed foreign counterparts about the situation on the ground. Before the war, a foreign diplomat in Beijing recalls Chinese interlocutors confessing that they had limited understanding of central and eastern Europe, but were fortunate to have the Russians to explain it for them.

Of course, other countries failed to anticipate the invasion, too. Perhaps Mr Putin did forewarn Mr Xi and convince him it would be done in days. But given China’s reputed capabilities, its lack of contingency planning and situational awareness suggests a serious intelligence failure. The heartening conclusion for many Western governments is that China’s spies are not always as good as advertised.

China has indeed expanded its espionage activities and capabilities in recent years, say intelligence officials. Much of that has focused on stealing technology in industries it seeks to dominate, such as robotics, aerospace and biopharma. Chris Wray, the director of the fbi, said in January that his agents open a China-related counter-intelligence case roughly every 12 hours. China’s cyber-espionage activities are especially brazen, outstripping those of all other countries combined, he said. In 2020-21 China’s cyber-spies “demonstrated a higher tolerance for risk” than before, reported Mandiant, a cyber-security firm.

China has got better at human intelligence, too. Some American officials blame a Chinese mole—as well as a compromised communication system—for the jailing or execution of many cia sources in China between 2010 and 2012. China’s spies have moved beyond the ethnic Chinese sources they used to rely on, often using stolen data to identify those with vulnerabilities, and making approaches remotely via LinkedIn and other social media. China has also escalated efforts to secure political influence in democracies, often by offering funding or perks to politicians, although that’s usually done through a Communist Party branch called the United Front Work Department, rather than its spy agencies.

Still, when it comes to snooping on foreign governments, China’s global interests have expanded so rapidly in the past three decades that its intelligence agencies seem to have struggled to identify clear priorities for what information to seek and where. “Even if you pull down every single piece of data in the Kremlin and Putin’s dachas, you still have to sort through it all to figure out what it is that you actually want to know about,” says Peter Mattis, a former cia analyst who is now at the Special Competitive Studies Project, a non-profit in Virginia. “If you’re searching through massive data, your results are only as good as your queries.” China’s focus on defence and commercial tech often comes at the expense of insight into decision-making in foreign capitals, say other experts.

Another Chinese blind spot is intelligence analysis, which is hobbled by a political culture that offers few incentives to take initiative or challenge orthodoxy. Junior and mid-ranking Chinese intelligence officers lack sufficient status to make potentially risky calls when interpreting raw intelligence. Those are usually made by officials at the vice-ministerial level or above. And even they may shy from passing on assessments that conflict with Mr Xi’s wishes or worldview. “Rather as with the kgb, the difficulty has been in telling truth to power,” says Nigel Inkster, a China specialist and former deputy chief of Britain’s Secret Intelligence Service. One consequence is that Chinese spies, unlike most Western counterparts, often ask sources for written analysis that can be passed up the chain but is ultimately attributable to the source, not the handler.

A related problem is that Chinese spies, while targeting high-value assets, have a tendency to recruit peripheral figures—often retired foreign officials or academics—and to do so within China. “They don’t do as well getting at hard targets,” says Nicholas Eftimiades, a former American intelligence official. To understand the situation in Ukraine, “they would need to get someone in the Polish government or the Polish military, or the Ukrainian military, who could report out what’s going on” in more-or-less real time, he says.

Running such assets also requires tradecraft, another long-running Chinese weakness (though it is now improving). In a study of 595 documented cases of Chinese espionage, mostly since 2000, Mr Eftimiades found that in 218 cases, the organisations and individuals involved used little or no tradecraft or did not make any significant attempts to hide their activity. Last year China suffered an embarrassment when Afghanistan expelled about a dozen suspected Chinese spies.

Spying on Russia presents China with particular challenges. Despite some recent success recruiting Russian sources, China probably has less insight into the Kremlin’s thinking than Western countries, which spent decades spying on the Soviets. China fell out with the Soviets, too, in the late 1950s, but lacked resources for serious espionage. Since the end of the cold war, Russia has attracted far more Western investors than Chinese ones. Western countries, unlike China, have become home to many politically connected Russians.

Such obstacles might be reassuring to some who are worried about China’s rise. But they also point to a more sobering conclusion: Mr Xi appears to be making enormously consequential decisions based on dodgy intelligence. It is unclear whether the root cause is the information itself, the analysis applied or how it is communicated to China’s leaders. Either way, the outcome could be deadly miscalculation.

Imagine a confrontation over Taiwan, the democratic island that China claims as its own—and threatens to recapture by force. Chinese spies have multiple sources there, but they skew towards pro-unification types, rather than those now in power. If Mr Xi were to consider military action, he would need his intelligence agencies to gauge at what point America might intervene. China’s spies direct many more resources to America than to Russia, and have better access to people who inform government decisions there. Even so, they might struggle to predict American moves in a crisis. And even if they get it right, the question remains: would they share a view that conflicts with Mr Xi’s? ■