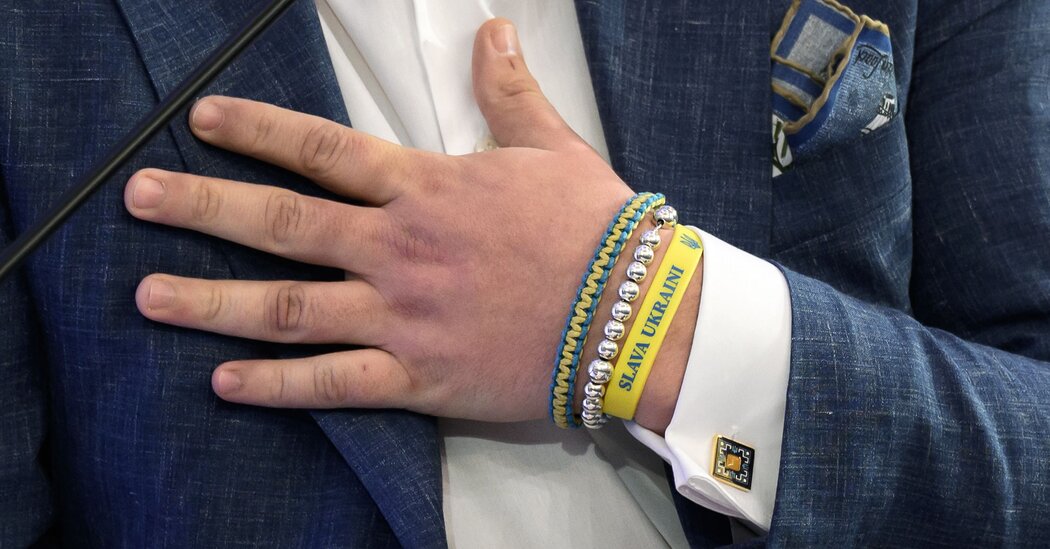 The annual World Economic Forum, delayed from its normal winter date by Covid, has wrapped up. The high-profile conference, which draws leaders from government, business and nonprofits, has returned for the first time since coronavirus shut down the world — but in the midst of a war in Europe.

DealBook was on hand, and here are our big takeaways:

Executives are worried about a slowdown. Nearly every conversation with chief executives was dominated by how to handle rising interest rates, inflation and supply chain shocks, with the latter two having been exacerbated by the Russia’s invasion of Ukraine. For technology companies, that requires a huge adjustment after two years with the winds of growth at their back. “It’s just a matter of these externalities playing out,” PayPal C.E.O. Dan Schulman said at a session. “And we are all taking a conservative view of that right now.” (The payments company laid off dozens of employees this week.) A number of tech executives told DealBook that the mood in San Francisco among start-up C.E.O.s right now is bleak.

Leaders are grappling with an energy transition that many predict will not be easy. “We need to accept that there will be some pain in the process,” said Kjerstin Braathen, C.E.O. of the Norwegian financial services giant DNB, at a session. “The pace that we need will open up for missteps; it will open up for shortages of energy; it will create inflationary pressures, and we need to start talking about that.” Braathen argued that because of the potential damage from climate change, the pain is worth it. In a separate session, Jim Hagemann Snabe, the chairman of Siemens, said the “most sharp knife in the arsenal of policymakers” when it comes to fighting climate change is putting a global price on CO2 emissions.

Crypto, the metaverse and space landed in Davos. But DealBook often heard from attendees that balancing excitement for those industries against the financial reality of the tech downturn, and impact of possible further decoupling with China, will be a challenge. “We have the luxury to continue to invest and grow, and I hope we have the opportunity to take advantage of the downturn in various ways,” Ripple C.E.O. Brad Garlinghouse told DealBook. “It’s going to be easier to hire people,” said Garlinghouse, the head of one of crypto’s largest companies, echoing the type of optimism in the face of adversity that is typical of Davos.

The war in Ukraine war cast a pall over the event. There were numerous calls throughout the conference, including from W.E.F. President Klaus Schwab, for a Marshall Plan to help rebuild Ukraine. (The Marshall Plan was a U.S. program that helped rebuild Europe in the wake of World War II.). Secretary of Transportation Pete Buttigieg has said that the U.S. would back such efforts. But in a panel at Davos, some U.S. legislators also made clear that while they continue to be unified in their defense of Ukraine, future support should come with more transparency in how the money the U.S. is sending Ukraine is being spent.

More than two dozen SPACs say they may go bust. At least 25 companies that merged with special purpose acquisition companies last year and the year before have reportedly issued “going concern” warnings in recent months, according to The Wall Street Journal. It’s the latest sign of shadows over the once-booming SPAC sector.

Substack drops efforts to raise money in the market downturn. The newsletter start-up was in discussions to raise about $75 to $100 million to finance growth, with the company valued at $750 million to $1 billion, but it has abandoned talks in one more sign that funding for buzzy young companies will no longer flow as freely as in the recent past.

Britain announces a major new tax on oil and gas profits. The 25 percent tax on the “extraordinary” profits of oil and gas companies is expected to raise more than $6 billion and help fund nearly $19 billion in payments to households to help with higher energy costs. Chancellor of the Exchequer Rishi Sunak announced the measures yesterday, saying that oil companies had benefited from a surge in commodity prices, in part driven by the war in Ukraine.

Tensions mount over how to end the war in Ukraine and declare a victor. Ukrainian and Eastern European leaders have resisted territorial concessions, while other countries, like France and Italy, are calling for compromise to end fighting, a position former Secretary of State Henry Kissinger also took in a speech at Davos this week.

The seedy side of crypto

The collapse in crypto prices this month has renewed scrutiny of the undisclosed financial ties between celebrity influencers and the virtual currencies they are promoting to the masses on social media.

The social media influencer Logan Paul, the former N.B.A. star Paul Pierce and other celebrities have promoted risky and obscure digital currencies, while sometimes failing to disclose financial ties to the projects, writes The Times’s David Yaffe-Bellany. Kim Kardashian and Floyd Mayweather have also made millions of dollars endorsing specific and often dubious crypto investments. They have urged fans to buy obscure coins that quickly crashed in value, or shilled little-known collections of nonfungible tokens, the unique digital files known as NFTs.

This constitutes a potential violation of federal marketing regulations. “You have this shameless profiteering from celebrities and others, who aren’t at all disinterested or impartial,” said John Reed Stark, a former chief of the internet enforcement branch at the S.E.C. “There is a lot of potential for harm.”

The lawsuits are coming. Even before the crypto market’s recent downturn, a series of these influencer-backed ventures had crashed spectacularly. Celebrities and others are facing lawsuits that could force then to compensate investors for their losses.

But the legal gray area of crypto means it may be hard to punish celebrities, even if they are found to profit unfairly from promotions. Under federal law, people marketing securities are required to publicly disclose payments for promotions. In 2018, Mayweather paid more than $600,000 to settle S.E.C. charges that he had failed to properly disclose his compensation for marketing initial coin offerings, the crypto equivalent of an initial public offering on Wall Street. But the rule he broke applies only to securities, like stock in a company, and it’s still unclear what crypto products meet that legal standard.

The Russia-Ukraine War and the Global Economy

A far-reaching conflict. Russia’s invasion on Ukraine has had a ripple effect across the globe, adding to the stock market’s woes. The conflict has caused​​ dizzying spikes in gas prices and product shortages, and is pushing Europe to reconsider its reliance on Russian energy sources.

Global growth slows. The fallout from the war has hobbled efforts by major economies to recover from the pandemic, injecting new uncertainty and undermining economic confidence around the world. In the United States, gross domestic product, adjusted for inflation, fell 0.4 percent in the first quarter of 2022.

Russia’s economy faces slowdown. Though pro-Ukraine countries continue to adopt sanctions against the Kremlin in response to its aggression, the Russian economy has avoided a crippling collapse for now thanks to capital controls and interest rate increases. But Russia’s central bank chief warned that the country is likely to face a steep economic downturn as its inventory of imported goods and parts runs low.

Trade barriers go up. The invasion of Ukraine has also unleashed a wave of protectionism as governments, desperate to secure goods for their citizens amid shortages and rising prices, erect new barriers to stop exports. But the restrictions are making the products more expensive and even harder to come by.

Prices of essential metals soar. The price of palladium, used in automotive exhaust systems and mobile phones, has been soaring amid fears that Russia, the world’s largest exporter of the metal, could be cut off from global markets. The price of nickel, another key Russian export, has also been rising.

“When you peel the onion, it starts to reek pretty quick.”

— Matt Dwyer, the Patagonia executive who oversees the privately held outdoor apparel maker’s supply chains. Patagonia and other companies have cut ties with their Chinese suppliers over worries that China’s cotton farms, many of which are in Xinjiang, home to a large population of Uyghers, widely use forced labor.

The expected repeal of Roe v. Wade is renewing concerns about privacy in the digital age. Politicians and civil liberties leaders worry that personal info, particularly location data, could be used against women seeking abortions.

This week, 42 members of Congress sent a letter to Alphabet’s chief executive, Sundar Pichai, urging the company to stop collecting and storing customer location data and search histories that could later be used to identify people seeking abortion in states where it is illegal to do so.

It’s another instance where the demarcation line of whose rights are protected in America is the income gap, privacy advocates say. Android smartphones, particularly lower-cost models, often come with trackerware that can’t easily be uninstalled, said William Budington of the Electronic Frontier Foundation. More expensive iPhones offer greater privacy. Lawmakers, in the letter to Pichai, said that Alphabet, the parent company of Google, is “creating a new digital divide.”

Constant online connection raises questions. In a post-Roe world, digital trails could be used as circumstantial evidence in court. Smartphones can show if the owner has visited an abortion clinic or whether they’ve searched online for medication to end a pregnancy. Period tracking apps that sell data to marketers can indicate that women are pregnant and how far along they are.

Google has been among the leaders in protecting users’ data from the government and law enforcement, says Nate Wessler of the A.C.L.U. Nonetheless, Wessler told DealBook that in the end even Google would have little ability to fight warrants seeking users’ info. “If it has data, and if the warrant is proper, it’s going to have to comply,” Wessler said of Google. “And that’s a privacy problem in lots of circumstances, but in a possible future where states are criminalizing pregnant people and doing everything they can to find who has been seeking abortion services, it just underlines the danger of companies sitting on data that’s not actually necessary for their operation.”

Best of the rest

We’d like your feedback! Please email thoughts and suggestions to [email protected].