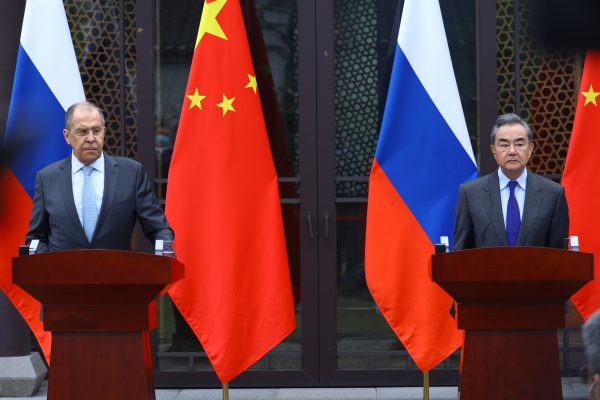 The Russian invasion of Ukraine has led to devastating destruction and casualties in the latter, with thousands killed and millions displaced by the ongoing conflict. The war will have a lasting impact on Sino-Russian relations (dubbed in some quarters a “friendship without limits”), as well as – by extension – Sino-European and Sino-American relations. In making sense of China’s stance on the matter, it is imperative that we investigate thoroughly the origins and manifestations of the Chinese public’s views on the matter.

The Carter Center China Focus-RIWI joint project – with findings published on April 19, 2022 – conducted a survey of nearly 5,000 Chinese internet users between March 28 and April 5, seeking to establish a fuller picture of Chinese public opinion on the Russian invasion. The survey was first-of-its-kind in its sample size, breadth of questions offered, and access to a comparatively robust sample of netizens in the country (though, of course, non-internet users might well have been excluded in virtue of the survey design). The survey yielded three important sets of findings which will be explored in conjunction with possible explanations and existing literature.

Broad Support for Russia a Product of Anti-NATO/U.S. Cynicism

A full 75 percent of the surveyed respondents indicated that supporting Russia in the Russo-Ukrainian conflict is in China’s national interest. What is worth noting here, however, is that the survey question is couched in terms of interest, as opposed to asking whether the war was right or justifiable. Respondents were not invited to reflect upon the most morally upright course of action, but what they deem the most prudential and instrumental course of action for China to take. One cannot help but ponder if a slightly reworded question (with greater emphasis placed upon how China should act, all things considered) would yield different results. With that said, even then, it remains relatively clear that few amongst the Chinese public feel that their country ought to actively refrain from supporting Russia – only 11 percent hold strong disapproval toward the country’s symbolically affirmative and trenchant stance concerning Russian interests over Ukraine.

What is behind this support? Maria Repnikova and Wendy Zhou’s exceptional essay on Chinese social media discourse suggested that many behind the Great Firewall had turned to NATO and the West for a primary target of castigation. A subtle ambiguity remains, however – are NATO and the West viewed expansively through moralistic, reprobatory lenses, such that Russia’s actions are seen to be “justified” by the ostensible expansions made by NATO since the end of the Cold War (or, more precisely, Eastern European powers opting to join the military-security alliance)? Or is the matter at hand one concerning means – that Russia’s move is aligned with its and China’s self-interest – in pushing back against NATO’S European presence?

The former is a narrative centered around blame, whereas the latter is a more pragmatic-instrumentalist discourse. Highly popular Chinese political scientist Zhang Weiwei’s remarks, in which he noted that “Putin saw that the U.S. lacked the will and resources to fight a war with Russia, so after decades of biding-time-and-waiting, he takes on the U.S. by launching the operation to de-militarize Ukraine” reflected the view widely held in segments of China’s civil society, that Putin’s invasion was a devastating blow to unity and stability within the Western bloc, and was thus a strategically savvy move. These comments, paired with the specific nature of the Carter-RIWI survey, seem to suggest that there is more at stake than mere normative repudiation of NATO/the amorphous “West” – geopolitical considerations also play a role in shaping mass attitudes, even if built upon empirically tenuous premises.

In a podcast episode with Sinica, Yawei Liu, senior adviser on China for the Carter Center, noted that among “China’s elite, more and more of them start to believe that U.S. now is hostile to China” – which was also borne out by another recent survey conducted by the “Sinophone Borderlands – Interaction at the Edges” project. Liu noted that this perceived animosity has come to shape the educated middle- and upper-middle classes’ perceptions of international affairs. The financial sanctions and political repercussions endured by Russia are framed as warning signs of what the United States would potentially do to China, in order to stymie the latter’s rise.

What is particularly interesting here is that, under this narrative, Russia’s agency and role take a conspicuous backseat. Indeed, 72 percent among those who have been exposed to the biolab conspiracy theory (i.e. that the United States has planted biolaboratories in Ukraine, manufacturing chemical and bioweapons targeting Russian citizens) believe the theory to be accurate – further affirming the Western threat-centric lenses through which Russia’s actions are viewed. Few among the Chinese public seem to believe that Putin’s unilateral declaration of war in late February can be justified or deemed rational from China’s perspective, without at least a major explanatory role played by “Western neo-imperialism.”

Anecdotally, much of the public discourse on social media platforms Weibo and Zhihu revolved around the ostensible role played by NATO in instigating conflict in Central and Eastern Europe, in fomenting and ignoring protests over security grievances from Kremlin, and in embracing a “New Cold War mindset” against China and Russia.

Variations do exist. The survey finds that higher education and more consumption of state and social media are correlated with higher support for Russia and subscription to the biolab theory. This could be attributed to the extent to which more intense, voluminous exposure to multiple channels disseminating similar discourses – paired with the higher level of self-confidence and strength of prior beliefs associated with education levels – plausibly does convince individuals with advanced degrees to double down on their ardent support for Russia.

What remains under-examined in the survey, perhaps, is the extent to which the respondents see the war as primarily the fault of the West, NATO, Europe, or Russia. An earlier, Brand Finance survey finds that a relatively significant number (around 50 percent) of Chinese respondents primarily pin the conflict in Ukraine on the United States – as compared with vastly lower numbers amongst the Japanese, British, German, French, and Brazilian populations. Furthermore, the differences between Chinese citizens from inland vs. coastal, northern vs. southern provinces could well prove to be significant in shaping attitudes toward the conflict. Where possible, a follow-up survey later this year would prove helpful.

Mixed Opinions on Best Course of Action for China: Clear Signs of Risk-Aversion and Preference for Peace

What is often overlooked in analyses of official public statements issued by the Chinese Ministry of Foreign Affairs is the distinctive emphasis over recent years upon the notion of China as a “peacefully rising power,” and one that adheres to principles of “non-violence” in securing a multipolar future. A core pillar of contemporary foreign policy under the current regime appears to be a heavily amplified rhetorical call for “peace” in face of military conflicts. This plausibly percolates through to shaping the mixed bag of prescriptive attitudes held by the Chinese public toward how the country ought to act in the face of the Russia-Ukraine war.

Over 60 percent of respondents opine that China’s best course of action is to “offer moral support to Russia.” This stands in stark juxtaposition against the 16 percent who support China’s arming Russia; another 13 percent say China should condemn Russia’s invasion and 9 percent say China should arm Ukraine. This result could perhaps be interpreted through what I term heuristic dualism – for many in China, their country’s support for Russia makes sense instinctively insofar as it does not drag the country into extensive, exhaustive military conflicts with unbridled costs. On the other hand, active interventionism would not only undercut China’s economic and political self-interest, but also directly contravene the broader heuristics of a “peaceful” foreign policy (though external observers may disagree with such characterization) that underpin the Chinese public’s self-perception of their country as an ascendant power. In short, most Chinese are willing to offer Russia rhetorical support, but not military backing.

The jury is still out on which hypotheses best explain the above. Is it that the Chinese public do not believe a full-blown war against the West is advisable for the country, or that they are unwilling to jeopardize their ties with the European Union through backing a hostile party to the Union? Nevertheless, the following data may offer us some sense of the rough direction of travel – upon the introduction of a further option, a majority (58 percent) of respondents opt for the verdict that China must seek to “negotiate an end to the conflict.”

Mediation is by no means a fresh thought amongst the Chinese foreign policy elite. In an op-ed published on March 13, prominent think-tank founder Wang Huiyao noted that “it is time to offer the Russian leader an offramp with China’s help.” What such negotiation entails, how it plays out, and whether China is likely to be welcome as a mediator by both sides are imminent political questions that must be tackled. It is unlikely that mass opinion has taken these elements into due consideration, but the appetite for China’s playing a more proactively pacifist role seemingly exists. (A note to the optimists: notwithstanding such sentiments, much of this has yet to materialize in practice.)

Do Chinese public sentiments really matter? Skeptics here may posit that the above enquiry is a waste of effort and unnecessary, citing both the heavily state-steered, top-down discursive and informational environments in China, as well as the limited extent to which public opinion apparently bears on the calculus of foreign policymakers and senior bureaucrats. The extent to which state and provincial interests steer national foreign policy, over the opinions of the public, cannot be overstated.

Yet whilst such skepticism is understandable given the trenchant turn in Chinese foreign policy over recent years, we must recognize that making sense of mass opinions in China over Ukraine – and the extent to which they converge with, approximate, or are shaped by elite views – serves critical academic and political functions. Not only does it shed insight into how Chinese public opinion concerning contentious foreign policy issues is formed and sustained; it also offers food for thought to those seeking to advance more constructive and effective engagement of the Chinese citizenry over areas of prospective international collaboration – including, of course, seeking a peaceful de-escalation and resolution to the atrocities at hand.

I would also posit that mass sentiments concerning whether mediation (or escalation, as the alternative) is the preferred modus operandi offer helpful glimpses into the decisions undertaken by small and medium businesses, private corporations, and academic institutions in the country as they continually weigh their options over the extent to which they ought to engage with, or disengage from, Russia. While financial institutions and banks are unlikely to care much for public sentiments, it is nevertheless useful to know where the line is drawn – if at all – by those who inhabit China.

The upshot is this: The current state of mass sentiments – and the fact that they are in part shaped and influenced by state media outlets and curated censorship – reflects that even among the upper echelons of Chinese politics, there remain a certain degree of disagreement and debate over how Beijing should approach the Sino-Russian relationship.

As Chinese Ambassador to the United States Qin Gang put it, “China and Russia’s cooperation has no forbidden areas, but it has a bottom-line… the tenets and principles of the U.N. Charter, the recognized basic norms of international law and international relations.” Unequivocal, unilateral military escalation to the conflict appears neither aligned with sentiments among the Chinese political leadership nor with public opinion.

To think of the Chinese public as a monolith is tempting yet would be erroneous. The complex and intricate results of the Carter Center-RIWI survey certainly offer food for thought.