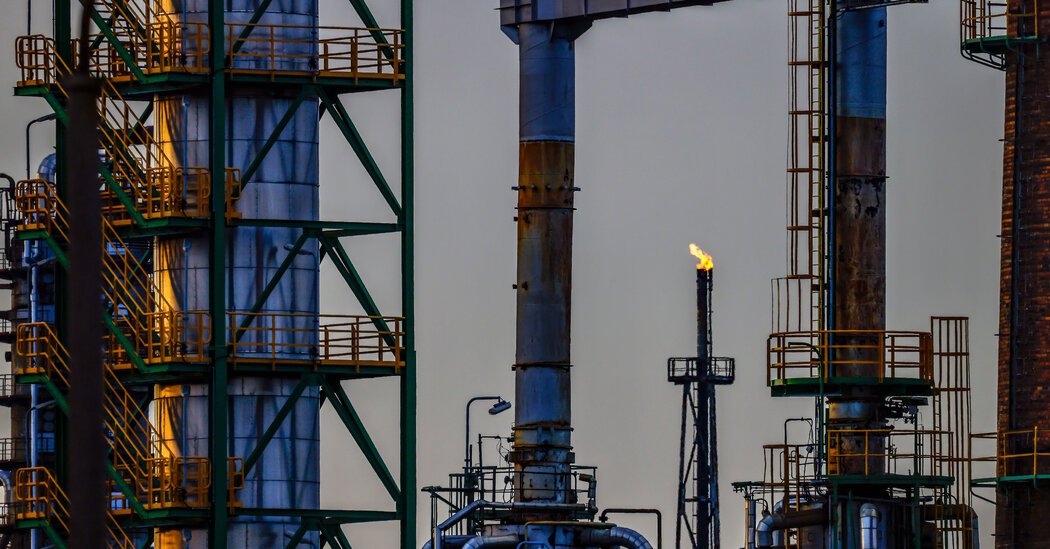 The E.U. may ban Russian oil

With no end to the Ukraine conflict in sight, the European Union took a major step on Wednesday toward weakening Moscow’s ability to finance the war, proposing a total embargo on Russian oil.

If approved this week as expected, it would be the bloc’s biggest and costliest step yet toward supporting Ukraine and ending its own dependence on Russian fossil fuels.

The measure could fly in the face of Russia’s Victory Day holiday on May 9, a grandiose celebration of the Soviet triumph over Nazi Germany. Western officials fear that President Vladimir Putin could use the event to whip up Russian support for expanding the scope of the conflict.

The British defense secretary suggested that Putin might recast what he has thus far called a “special military operation” into an all-out war, calling for a mass mobilization of the Russian people. Here are live updates.

In other energy news, the war has shown the fragility of Japan’s resources. But the decision to restart nuclear plants after the Fukushima disaster is fraught.

State of the war:

Has the leak politicized the Court?

The dust is settling after Politico published a leaked U.S. Supreme Court draft opinion that would reverse Roe v. Wade and permit states to ban abortion. Now, Americans are expressing unease that the court has become too political.

Polls indicate that its reputation was in decline even before the leak, which was an extraordinary breach of its norms of confidentiality. Over three years of contentious confirmation hearings and disputes, public approval of the court declined 15 percentage points, dropping to the least positive rating in nearly four decades, the Pew Research Center found early this year.

“Questions about the court’s legitimacy are more pitched than they ever have been,” one law professor told The Times.

Politics: A long-organized triumph for the conservative legal movement appears to be at hand, but the movement’s libertarian and cultural-conservative factions have different priorities. Democrats are struggling to respond.

What’s next: A decision isn’t expected until this summer. If the court strikes down Roe, abortion would be effectively banned in 13 states because of so-called trigger laws. For now, abortion providers are rushing to meet increased demand.

Data: A majority of Americans believe that abortion should be legal in all or most cases. But the story is more complicated in the states where the future of abortion policy is likely to be decided if Roe v. Wade is overturned.

International: Roe inspired abortion-rights activists worldwide, our Interpreter columnist writes, and they may rethink their strategy of relying on the courts.

Beijing is developing a deepwater port and a transportation network linking the port city of Gwadar to China. The separatists see the partnership as supporting Pakistan’s government, their enemy. In recent years, many of their targets have been Chinese.

Last month, a suicide bomber detonated a bomb near a bus carrying Chinese teachers, killing four others. Chinese development work must stop, the separatists threatened, “otherwise our future attacks will be even harsher.”

Business: Pakistan’s government views foreign investment as vital and is eager to strengthen ties with China as a counterweight to its archrival, India.

Analysis: The government is fighting other insurgencies, including the Islamic State affiliate ISIS-K and the Pakistani Taliban. Baluchistan has faced five insurgencies since 1947, the most recent and persistent one underway since 2003.

Mexican drug cartels are trying to move into the mainstream economy, which could disrupt the country’s bilateral trade partnership with the U.S. “There is an evolution toward a classic Italian-style criminal-political relationship,” one expert said.

Lives lived: Norman Y. Mineta, who was interned as a child during World War II, was the first Japanese American U.S. cabinet official. After 10 terms in Congress, he served as commerce secretary under Bill Clinton and transportation secretary under George W. Bush. Mineta died this week at 90.

Can the theatrics and engrossing nature of reality television translate to podcasts? That’s what “Being Trans,” a show that follows the lives of four transgender cast members in Los Angeles, is trying.

Many podcasts use a documentary format or are improvisational and unscripted. But “Being Trans” hopes to immerse audiences in its subjects’ lives by recording in the field and forgoing hosts and external narration. “You’re just hearing people existing,” said Stephanie Wittels Wachs, a co-founder of the studio behind the show.

There are upsides to an audio-only show: Each episode costs less than a quarter of what a typical hour of reality TV does and the format allows for flexibility. “We don’t have to deal with lights or makeup,” said Kasey Barrett, an executive producer of the podcast and a veteran of reality television. “And we can do things on a much smaller scale, which lends to the intimacy.” — Sanam Yar