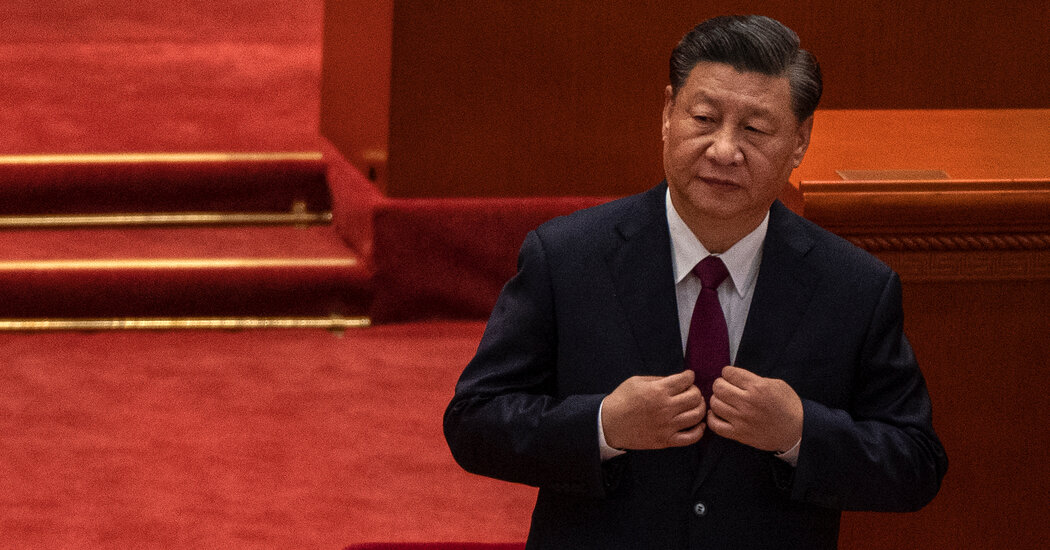 BEIJING — For much of last year, China’s top leader, Xi Jinping, waged a fierce campaign to rein in private capital and narrow social inequalities. Regulators cracked down on tech giants and wealthy celebrities. Beijing demanded that tycoons give back to society. And the Communist Party promised that a new era of “common prosperity” was on the horizon.

Now, the Communist Party is putting its campaign on the back burner. In doing so, Beijing is tacitly acknowledging that Mr. Xi’s push to redistribute wealth has unnerved the private sector — a pillar of growth and job creation — at a time when China’s economic outlook is increasingly clouded.

To Beijing, ensuring the economy is stable and growing is paramount this year, an all too important one for Mr. Xi. As he prepares to claim a third five-year term later in the year, he has sought to portray China as more prosperous, powerful and stable under his rule. Officials have scrambled in recent months to try to reverse a slowdown in growth, made worse by surging global oil prices, uncertainty over the war in Ukraine and lockdowns in China to contain an unrelenting surge of coronavirus cases.

“Common prosperity is still here, but the growth situation is quite challenging,” said Huang Yiping, deputy dean of the influential National School of Development at Peking University, in an interview. “The top priority is really to stabilize growth.”

The delay is more of a tactical retreat than a wholesale abandonment of Mr. Xi’s plans, which the party continues to describe as a long-term goal. Mr. Xi’s “common prosperity” campaign is a pledge to shrink the country’s wide wealth gap and build up a middle class that can drive domestic consumption and reduce the country’s reliance on debt-fueled growth. It also serves political aims: to shore up public support for Mr. Xi’s leadership and champion the Chinese political system of centralized control as superior to the West.

Regulators had targeted what they called the “disorderly expansion of capital.” They cracked down on a variety of businesses seen as widening the gap between the haves and have-nots, including after-school tutoring, internet financial products and online shopping. The moves abruptly wiped more than $1 trillion off the value of Chinese companies and forced many firms to lay off workers or even file for bankruptcy. The campaign also spooked investors and entrepreneurs by asserting the party’s power over society and raising questions about the role of private businesses in the country’s future.

The party’s leadership began signaling in December, as the economy was slowing, that it was cooling on the campaign. When the Politburo met that month to decide on economic priorities for 2022, it did not use the phrase “common prosperity” in its official summary; instead, it emphasized “stability as the top priority.”

Beijing also sought to reassure international investors it was still open for business, with Mr. Xi himself declaring that China welcomed all types of capital and that his campaign was not a push for egalitarianism.

“We will first make the pie bigger, and then divide it properly through reasonable institutional arrangements,” he said in a video speech to business leaders at the World Economic Forum in Davos, Switzerland, in late January. “As a rising tide lifts all boats, everyone will get a fair share from development.”

But investors at home and abroad have continued to be rattled by Beijing’s crackdown on the private sector. Confidence in China’s economy withered as China imposed strict lockdowns to curb Covid-19 outbreaks and as Russia’s invasion of Ukraine raised commodity prices.

A steep sell-off of shares in Shanghai over the past months — with the market falling 17 percent from mid-December to mid-March — prompted a rare intervention from Vice Premier Liu He, Mr. Xi’s right-hand man on economic policy.

Mr. Liu pledged that Beijing would support the economy and limit the unpredictability that had roiled markets. Any new government policy that might have a significant effect on share prices and other activity in financial markets would first have to be cleared by Mr. Liu’s financial management team, according to a statement released by the official Xinhua news agency.

Mr. Liu may have been suggesting that last year’s crackdowns were a form of overzealousness on the part of officials who were moving too quickly to carry out Mr. Xi’s long-term goals, a point that some economists have made.

“Under President Xi Jinping, the Chinese government system runs like a sports car — the gas pedal and the brake pedal act extra fast,” said Li Daokui, the director of the influential Center for China in the World Economy at Tsinghua University in Beijing. “When he wants to implement a policy, even a long-term policy, the car instantly accelerates, and that might not be what is intended.”

Mr. Li noted, for example, how officials raced to respond to Mr. Xi’s announcement in September 2020 that China would reduce its net emissions of carbon dioxide to zero by 2060. Local governments limited coal investment and production and set restrictions on the use of fossil fuels, without first figuring out alternative energy sources to keep activity humming. Those moves caused rolling blackouts across the country last year and briefly paralyzed many factories in September as coal-fired power plants did not generate enough electricity.

Mr. Xi himself denounced last month any premature move to abandon coal, using a culinary analogy to describe how officials had to lay the groundwork before making major changes.

The Russia-Ukraine War and the Global Economy

Shortages of essential metals. The price of palladium, used in automotive exhaust systems and mobile phones, has been soaring amid fears that Russia, the world’s largest exporter of the metal, could be cut off from global markets. The price of nickel, another key Russian export, has also been rising.

Financial turmoil. Global banks are bracing for the effects of sanctions intended to restrict Russia’s access to foreign capital and limit its ability to process payments in dollars, euros and other currencies crucial for trade. Banks are also on alert for retaliatory cyberattacks by Russia.

There are signs that Beijing is reversing its policies in other sectors to prop up the economy. China’s premier, Li Keqiang, for example, called last Thursday for officials to provide more support for internet companies and help them add jobs.

The government tried to rein in the real estate market after Mr. Xi said several years ago that “housing is for shelter, not speculation.” But those efforts have led to a widespread malaise — as well as debt defaults at huge developers like Evergrande. That has hurt construction and related industries that make up as much as a quarter of China’s economy.

The government has in recent weeks been easing its tight restrictions on home purchases. The city of Zhengzhou in central China dropped a limit on the purchase of homes by people who already own one. Hengyang, a city in southern China, introduced a subsidy of nearly $5,000 to help technicians and undergraduate students buy their first homes. Over 65 cities have moved to lower minimum down payments and mortgage interest rates, or otherwise loosen policies, according to Zhuge Housing Search, an online real estate brokerage and data service in the country.

Beijing has also put off plans to expand a trial of a property tax that has been a focus of the drive to redistribute wealth. The party has long debated introducing a national property tax, which economists say could help the government raise money without holding land auctions, as well as penalize speculators who buy homes and leave them unoccupied.

In October, Mr. Xi urged officials to “actively and steadily advance the work of property tax legislation and reform” as part of plans to “reasonably regulate excessive incomes.” But last month, the finance ministry said the conditions this year were not suitable for expanding the pilot property tax plan, a pronouncement seen as an effort to spur home buying.

The party’s overriding priority of delivering growth this year is also forcing it to set aside difficult changes that could address deep-rooted problems with its economic model. China has long pushed to wean its economy off its dependence on borrowing for infrastructure projects that loaded the country with trillions of dollars in debt.

This year, China is set to pursue its biggest binge of construction projects since the global financial crisis of 2008. At the time, the national government unleashed a wave of spending on construction to keep the economic engine chugging, but local governments and state-run companies borrowed heavily to help finance the building of highways, bridges and the Beijing-to-Shanghai high-speed rail line.

“This year will be like a rerun of 2008 and 2009, in terms of trying to promote infrastructure,” Mr. Li at Tsinghua predicted.