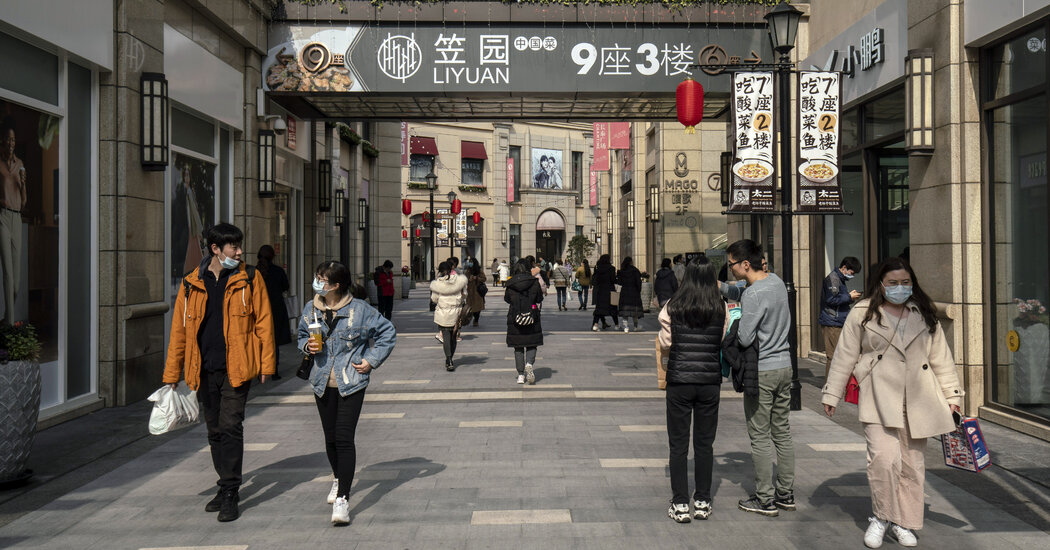 For Swiss watchmakers preoccupied with growth — and let’s be honest, that is virtually all of them — China is the relationship they cannot live without.

“It’s going to be the growth market with the biggest opportunities in years to come,” said Jean-Philippe Bertschy, a luxury goods analyst at Vontobel, a private banking and investment management group based in Zurich. “We can talk about the U.S. and Asian markets, but in terms of volume and size, of course it will be China for the foreseeable future.”

By all accounts, the scenario that Mr. Bertschy described is already here. After besting the United States and Hong Kong to become Switzerland’s No. 1 export market for watches in 2020, China is neck and neck with the booming U.S. market to retain that position for at least another year.

Call it the pandemic effect. When the Chinese government clamped down on travel in 2020, Chinese consumers who had become accustomed to buying luxury goods on Europe’s high streets redirected their spending domestically.

As a result, European luxury brands were forced to adapt by expanding their retail operations in China — both within the mainland and Hainan Province, an island in the South China Sea that authorities in Beijing hope will soon rival Hong Kong as a free-trade port, a domestic vacation destination and an international commercial hub.

No wonder a Swiss watch industry study published by Deloitte in October found that 57 percent of the executives surveyed forecast strong growth in China, and 37 percent of the brands were investing heavily in the Chinese market.

While the prospect of future sales in China is catnip to Swiss watch executives, few would deny the difficulties associated with doing business there.

These include retail and supply chain disruptions exacerbated by the country’s “zero Covid” strategy; the effects of President Xi Jinping’s “common prosperity” campaign, aimed at discouraging public displays of wealth; and the biggest challenge of all: Many Swiss companies — by virtue of their distance from China, both geographically and culturally — simply cannot keep up with its rapidly changing consumer culture.

“There is extraordinary dynamism in terms of the appetite for new things,” Antoine Pin, managing director of Bulgari’s watch division, said on a recent phone call. “The fact that we are far away, and we cannot physically experience what’s new in the market — sometimes we feel we are behind because it requires constant attention and curiosity.”

Almost no watchmaker can afford to be lax about its strategy in China. Take it from Julien Tornare, chief executive of Zenith. Over the summer, he got a taste of the power that celebrities wield in the Chinese market when the brand announced its newest ambassador, the actor and singer Xiao Zhan.

“When we announced him at the beginning of July, we got 342 million views on Weibo,” one of China’s most popular social media platforms, said Mr. Tornare on a recent phone call. “Then, within a few hours, we got nine million views of our video on the announcement. And we sold more watches in 24 hours than in a whole month.”

Zenith operates 15 boutiques across China, has 20 additional points of sale through partner retailers and has, since January, offered e-commerce through JD.com and Tmall. Across all those channels combined, “our retail did 450 percent growth over the prior year, which is basically showing us that people heard the announcement, literally stepped out of their house and went and bought watches,” Mr. Tornare said. “All sorts of watches. Not only the Defy Extreme that Xiao had on his wrist.”

And despite the Chinese government’s recent pledge to more tightly regulate celebrities’ online information, as part of a wider campaign to tame what it calls “chaotic” fan culture, the prospects for luxury brands that rely on celebrity endorsements in China remain promising.

Christopher A. McNally, a professor of political economy at Chaminade University in Honolulu, and an adjunct senior fellow at the East-West Center, said that while the government’s efforts may affect some aspects of marketing, the new regulations don’t pose a big threat to the luxury business.

“There might be a few upheavals (and the celebrities themselves are really affected and will continue to face further scrutiny),” Mr. McNally wrote in an email. “But for the luxury brands it means continue to adapt, while most likely still facing a very dynamic market.”

Though the pandemic supercharged consumers’ appetites for luxury goods, it also introduced a host of uncertainties.

A lingering question for watchmakers is how the Chinese government’s “zero Covid” policy will affect the supply chains that keep the industry humming, and to what degree future lockdowns would threaten brick-and-mortar retail.

“If you look at the reality of the numbers, Covid is anecdotal in China, but because of the dimension of the response every isolated case generates, it still has a major impact,” said Pablo Mauron, the Shanghai-based managing director of the China division of the Digital Luxury Group, a Geneva-based consultancy.

He referred to an incident at Shanghai Disneyland in late October, when the park was locked down so tens of thousands of park visitors could be tested for Covid-19 because a woman who visited a day earlier tested positive for the virus.

And while many of the watch industry’s components travel by airfreight, citywide or provincewide lockdowns still have the potential to hamper supply chains and to slow factory production.

“It’s all a sum of negative factors adding up and making the situation complicated,” said Oliver R. Müller, founder of LuxeConsult, a watch consultancy based near Lausanne, Switzerland.

In a market where KOLs (key opinion leaders) and KOCs (key opinion consumers) increasingly have more sway, luxury labels have had to embrace, or at least tolerate, the explosion of user-generated content on social media, setting up a power struggle with consumers that threatens to unravel their carefully constructed brand narratives.

“At some point, consumers in China were looking for content that was more genuine and relatable than the polished content of brands,” Mr. Mauron said. “Red is built to empower word of mouth. And as a result, it evolved both as a place to discover new trends and brands, but also to seek reassurance.

“Before an act of purchase, I know I can turn to Red to find genuine content from users,” he added. “People are doing detailed reviews of purchases, and also showcasing purchases they’re not happy about it.”

For Swiss watch executives, the grassroots marketing effort required to manage their reputations on such platforms contradicts everything they thought they knew about luxury.

“What we have been taught with the old Kapferer bible of luxury strategy — ‘Stay away from digital, and don’t sell there’ — is the complete opposite in China,” said Felicitas Morhart, a professor of marketing at the University of Lausanne. In 2020, she founded the Swiss Center for Luxury Research, a think tank that addresses issues about the future of luxury management.

“The overflow of luxury e-commerce on Tmall, WeChat, the livestreaming of runway shows — luxury is everywhere,” Ms. Morhart said. “It’s not exclusive anymore, it’s something for everyone. And at a fingertip, you can spend money on the next luxury item, which counters the traditional way of presenting luxury in Europe. However, China is so powerful now that they are changing the game.”

On a recent episode of her “Luxury On Air” podcast, Ms. Morhart discussed the philosophical differences between the East and West over the definition of luxury with Yajin Wang, an associate professor of marketing at the China Europe International Business School in Shanghai.

“Think about how people experience brands now,” Ms. Wang said on the podcast. “They have all the information available on hand and can make a decision on the spot. They are influenced by KOLs and KOCs, who are so used to buying and receiving things the next day.”

Ms. Wang noted that, even as traditional luxury brands continue to fret about what selling online says about them, failing to adapt to digital opportunities, such as livestreaming, is a surefire way to lose touch with the market in China.

“The fact is, livestreaming selling is so prevalent here, that’s the way you have to engage with consumers,” Ms. Wang said. “So now major brands all have their livestreaming platforms, have their own KOLs and can sell hundreds of handbags within seconds. That is something luxury stores with the best salesperson could not achieve.”

Of course, the wisdom of buying all those luxury goods is also being called into question, as the government strives to mitigate income inequality by discouraging people from accumulating, and flaunting, their wealth.

Mr. McNally of the East-West Center said that luxury consumption is so ingrained among Chinese consumers as a way to convey status that even though “very lavish spending is certainly being frowned upon,” the government’s efforts are not likely to put a big dent in luxury sales.

“The ‘common prosperity’ theme has a long history in China that goes back to Mao and, basically, socialism,” said Mr. McNally, an expert on China’s transition to capitalism. “It’s been used again and again, on and off, but it’s really come to the fore in the last half a year. This is part of Xi Jinping’s mantra to rejuvenate the Chinese nation.

“What the party would like is a much more socialist ideal, where everybody works for common prosperity, where you do not ostentatiously show off your wealth; indeed you give to charity, you build schools, endow fellowships, build hospitals,” he said. “But for the big chunk of consumers of luxury goods, it might be difficult to change this.”

Unless a luxury company falls into the cross hairs of Chinese consumers — as famously happened with Dolce & Gabbana in 2018 — the growth that so many brands are banking on in China is, according to many Swiss watchmakers, a sure thing.

“There is a whole generation of people who are single children,” said Edouard Meylan, chief executive of H. Moser & Cie, an independent Swiss brand that has spent the past two years establishing a foothold in mainland China.

“They have two parents, four grandparents and there’s money. That’s why this market is growing. There’s a need — and a huge hunger.”