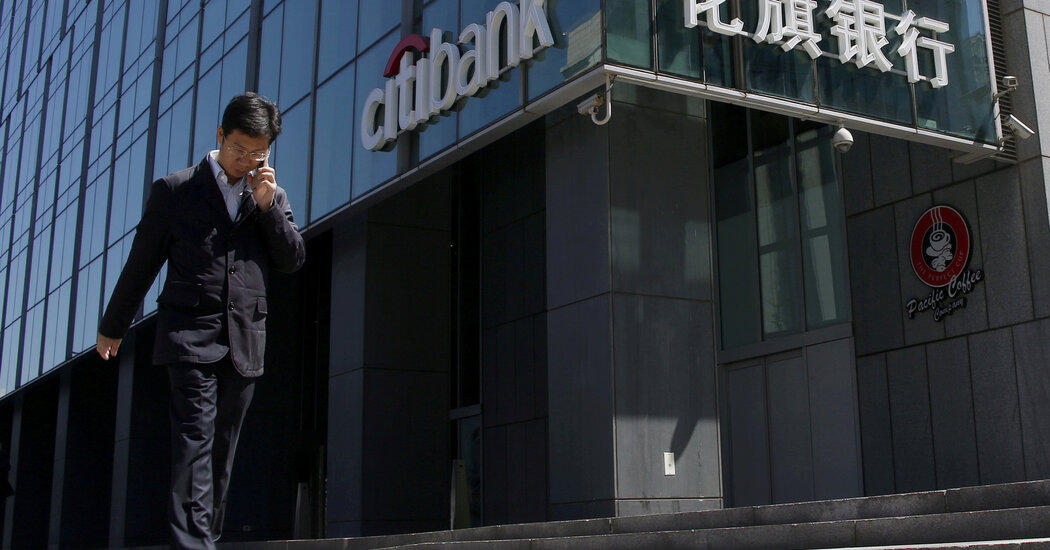 For decades, American banks have been eager to expand their business in China, the world’s second-largest economy. They’re finally getting their way — just as a spiraling corporate debt crisis threatens to rock the country’s financial system and China’s central government takes a stronger hand with big businesses.

In July, Citigroup became the first foreign bank to win approval to open a custody business in China, essentially acting as a bank for Chinese investment funds. In August, JPMorgan Chase got permission from the Chinese authorities to take full ownership of its investment banking and trading business in the country — a century after it first opened shop there. Goldman Sachs received the green light for a similar venture in October.

As the approvals came in, the message from Beijing was clear: It wanted U.S. lenders to bring more foreign investors into China and help Chinese people buy assets overseas.

Thrilled that they no longer have to split profits with local partners for services like underwriting equity deals or providing advice to companies, Wall Street banks are rushing to oblige. They want to broker more transactions, help Chinese companies raise funds and manage money for the country’s rapidly growing moneyed class. The total wealth of China’s 100 richest people increased to $1.48 trillion in 2021 from $1.33 trillion a year earlier, according to Forbes.

“Obviously, what we can do in China is largely dictated by how the Chinese government allows us to operate,” David M. Solomon, the chief executive of Goldman Sachs, said in an interview last month. “We’re encouraged by the fact that after a long period of time they’re allowing us to control our joint venture.”

Still, he added, “the U.S.-China bilateral relationship, the politics around China are going to be complicated.”

Wall Street banks are gaining ground in China just as a property crisis is brewing, and as its financial system is beginning to reel under the weight of a yearslong debt-fueled corporate boom. The property developer China Evergrande, with some $300 billion of unpaid debts, has became the poster child for those troubles.

Although it narrowly averted default on its bonds last month, Evergrande’s perilous situation is causing panic among other developers that could unsettle the wider Chinese economy. And while the debt woes could create new banking opportunities, they also create unpredictability.

China is easing restrictions on foreign ownership of financial services firms because it agreed to do so as part of a trade agreement with the Trump administration. But the country could just as easily bar those firms, said Dick Bove, a veteran banking analyst at Odeon Capital Group.

“Give it a year and a settling of their financial problems,” Mr. Bove said. After that, “they won’t need the American banks, and they can kick them out.”

Banks also have to consider the fraught relationship between the United States and China, even though their economies are deeply interlinked. China was America’s largest trading partner for goods last year, with $559.2 billion in goods changing hands between the two nations, according to the Office of the United States Trade Representative. It was the third-largest market for exported U.S. goods.

The flow of goods and services has continued despite a continuing trade war that intensified in 2018 after President Donald J. Trump imposed tariffs on a broad swath of Chinese products. President Biden is scheduled to hold a virtual summit with President Xi Jinping of China on Monday amid friction over trade, cyberthreats and Taiwan, among other issues.

Geopolitical tensions involving Taiwan and worries that military maneuvers could spiral into hostilities that would jolt financial markets have also weighed on the minds of financiers.

Six senior Wall Street banking executives, who declined to speak publicly about some aspects of their business because of the political sensitivities, said that although they welcomed China’s latest steps toward financial opening, they were keenly aware that the Chinese government could at any moment revoke their right to do business. They noted that their firms had other bases in Asia, like Singapore or Tokyo, in case they needed to pivot away from the mainland.

Bankers cited Beijing’s crackdown on tech companies, including the ride-hailing giant Didi, the internet powerhouse Tencent and the e-commerce giant Alibaba, as examples of other policy changes that could unnerve foreign businesses and investors. Mr. Xi’s “common prosperity” initiative to address the country’s wealth gap, which has put many homegrown tycoons on notice, is also worrisome to foreign companies.

Last year, Chinese regulators scrapped the initial public offering of Ant Group, an internet finance company controlled by Jack Ma, the co-founder of Alibaba. The celebrity billionaire has kept a low profile and pledged along with other business moguls billions of dollars to charity.

Still, the banks are charging ahead. They are taking full ownership of joint ventures or finding new business partners. JPMorgan and Goldman are aiming to expand their operations across the board in China, from underwriting equity and debt offerings to advising on cross-border deals and building out trading activities. Goldman also has a tie-up with ICBC Wealth Management, a local player that gives it a shot at managing money for some of ICBC’s 26 million personal customers and 730,000 corporate clients.

Bank of America, which has been slower than rivals to build a footprint in China, plans to apply for permission to set up a brokerage. Morgan Stanley is waiting for Chinese regulators to approve an increase in ownership of its Chinese securities firm to 90 percent. The bank is also seeking to raise its stake in a fund-management joint venture to 85 percent.

And BlackRock, the asset management behemoth, raised $1 billion in September from Chinese investors for the country’s first foreign-run mutual fund three months after the authorities gave the go-ahead.

Citigroup is focusing on building its wealth management business. Even as it sheds some consumer-banking operations on the continent, the bank aims to double staffing in its private bank in Asia and concentrate on serving wealthy clients, including in China, said Ida Liu, Citi’s global head of private banking.

But the lender also monitors Chinese policies “super closely,” and has explained to clients that strained U.S.-Chinese relations may introduce more volatility into their portfolios, Ms. Liu said in an October interview.

U.S. banks are also bullish about the potential to sell financial products to China’s rising middle class as it seeks out investments beyond real estate. Nearly three-quarters of household wealth in China is tied to property, and the debt-ridden housing market is increasingly seen as a threat to the economy.

Wall Street’s enthusiasm for China is echoed by some of its biggest clients, including hedge funds, money managers and other major American investors who have been so far undeterred by the common-prosperity agenda and the Evergrande saga.

Ray Dalio, the founder of Bridgewater, the world’s largest hedge fund, has urged investors not to read the Chinese government’s actions as necessarily “anticapitalist.” In media interviews and in a LinkedIn post in July, he said diversified portfolios should include investments in both the United States and China.

“We’re seeing a lot of institutional investors stay the course in China,” Ms. Stafford said last month. “This is perhaps an indication that allocations to China are sticky, and have staying power, and people are in it for more of the long term.”