Recent reports about barrages of Chinese squid-fishing boats in the Taiwan Strait have once again brought attention to the environmental impact of overfishing. However, teeming trawlers armed with green LED lights only represent the tip of the iceberg in terms of environmental challenges for Taiwan’s offshore islands, as the small island communities fall victim to China’s unfettered approach toward development and natural resource extraction.

As environmental damage from China continues to spill over maritime borders – ranging from illegal fishing boats, to sand-mining dredgers, to marine debris – Taiwan’s Coast Guard finds itself in an extremely challenging situation.

The nature of the problem is both environmental and political. Since political boundaries are drawn across interconnected ecosystems, small islands are forced to bear the cost of environmental destruction that may originate from external sources. The failure of Chinese authorities to establish responsible environmental restrictions results in the destruction of fragile ecosystems, regardless of political jurisdiction.

From mid-August to late September, the night skies in the Matsu Islands were tainted green as a result of high-power LED light attractors used by Chinese vessels. On busy nights, around 100 to 200 ships were visible from Matsu’s main island of Nangan, with a majority toward the northwest and northeast. The green skies prompted locals to refer to the sight satirically as the “Matsu Northern Lights” or “Matsu Aurora.”

Squid boats that employ green lights started to appear near Matsu a couple of years ago as a result of research indicating that cephalopods prefer light with a green or bluish hue. This year, the number of vessels using green lights increased significantly. Although domestic fishing vessels from Taiwan also utilize light attractors, the fleets are much smaller in scale. According to Taiwan’s Coast Guard, domestic boats mostly use white or yellow lights.

While light fishing is not illegal itself, environmental groups have called for restrictions to prevent overfishing. Unregulated light fishing may cause environmental destruction, increased bycatches, and the depletion of fish. Biological research has revealed the negative impact of light pollution on marine life, as disruptive light affects internal clocks and reproductive mechanisms of fish.


Moving beyond the Taiwan Strait, aggressive Chinese fishing has raised concern across the globe, notably as far as South America. A large Chinese fish fleet of up to 300 boats operating near the Galapagos Islands has been described as a “Great Wall of Light.”

There has been a drastic decrease in catches for Matsu’s fishing industry over the years, and unrestricted light fishing is seen as one of the underlying factors. As local fishermen have observed, if fishing activities are left unrestrained, there may be no squid or fish left for future generations.

As overfishing is a global issue, it is important for countries in the region, including China, to establish stricter environmental regulations on light fishing. To cite examples in Taiwan, many municipal governments have set up restrictions that regulate the number of lights allowed per ship, acceptable brightness (wattage), operating distances from coast, and more.

Aside from the fishing industry, light pollution also affects tourism in Matsu, such as the popular nighttime viewing of “blue tears,” a common name for bioluminescent algae. Although squid fishing is supposed to be prohibited by Chinese authorities from May to mid-August, which covers the peak of the “blue tears” tourist season, locally reported cases of Chinese squid boats indicate that they continued to operate illegally close to the waters of Matsu. This has led to a negative impact on the local tourism industry.

Matsu is currently seeking international certification as an International Dark Sky Place for one of its minor islands – Daqiu Island. The project promotes the preservation of natural night skies and stargazing activities through minimizing light pollution. The certification bid intends to raise Matsu’s international profile, as well as espouse a sustainable vision for tourism and development that contrasts with traditional models. However, light pollution caused by the squid boats has also increased the difficulties for Dark Sky certification.

Environmental neglect has also led to the destruction of the habitat of a critically endangered species, the Chinese Crested Tern.

A recent report by Taiwan’s Business Weekly magazine has revealed that despite high-profile conservation efforts, the Chinese Crested Tern has abandoned its nests in Matsu for two years in a row, leaving many unhatched eggs behind.

Scientists believe the phenomenon is a result of constant disturbances by Chinese sand dredgers, squid boats, and other illegal fishing activities. Together, these disturbances to wildlife span around the clock. Destruction of the local ecosystem has also led to the depletion of fish – a source of food for the Chinese Crested Tern.

With an estimated global population of around 100, the Chinese Crested Tern is an extremely rare migratory bird that spends its summers in breeding grounds along coastal China and Matsu, while flying to warmer weather in the Philippines during winters. The rare species, which was once assumed to be extinct for over 60 years, was rediscovered in Matsu in 2000. It has since been championed affectionately by locals as a “mythical bird” and county mascot.

Although the Chinese Crested Tern continues to be spotted in other locations along the coast of China, its “flight” away from the Matsu Islands is the tragic result of environmental neglect, as well as difficulties of conservation on a longstanding political fault line. 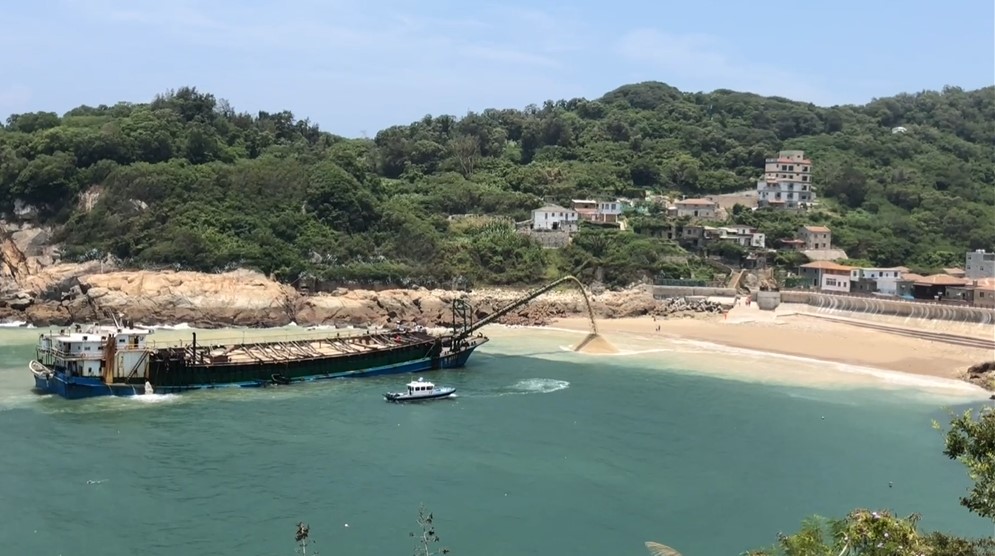 An illegal Chinese sand dredger impounded by Taiwan’s Coast Guard is ordered to spit sand back into the coastal waters of the Matsu Islands. Photo by Aya Liu

Taiwan is taking steps to curb environmental destruction in the strait. Following international attention toward large numbers of Chinese sand dredgers surrounding Matsu in mid-2020, Taiwan’s parliament passed an amendment that raised the punishment for those convicted of illegal sand mining to US$3.56 million in fines and a maximum jail sentence of seven years. The bill, which was passed in December 2020, also contained a clause that allowed for methods other than time-consuming court auctions to dispose of or disassemble impounded dredgers.

Adopting a legal approach is crucial for Taiwan as the nation tackles environmental issues on its maritime borders with China, as any unexpected use of force on civilian vessels may be used as a pretext for China to further escalate tensions. However, law enforcement continues to remain challenging as sources of environmental damage constantly spill over national boundaries.

Continuous ecological destruction has prompted discussion in Taiwan about establishing expanded areas for marine conservation near the offshore islands. For example, last year, legislators launched discussions about a “Marine Conservation Zone,” which would extend beyond Matsu’s currently enforced 6,000-meter “restricted waters.” In the absence of efforts from Chinese authorities to curb environmental damage in the area, more innovative methods might be needed to protect natural resources and prevent unintended maritime conflict.